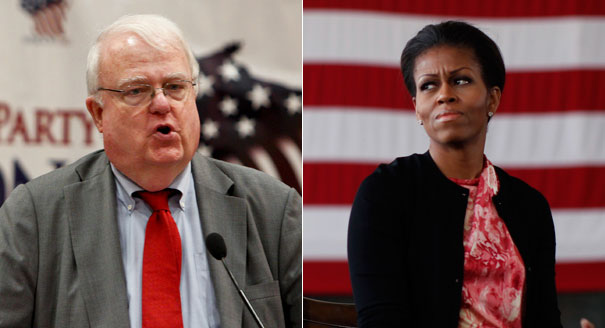 Last week Rep. Jim Sensenbrenner was overheard saying that First Lady Michelle Obama should attend to her “large posterior” before lecturing Americans on eating right.  Of course this was a circuitous swipe against Obama’s Let’s Move campaign.  How dare the FLOTUS suggest we inclusively get off our growing posteriors and get moving, and how dare she tell Americans what to eat!

Correct me if I’m wrong but First Lady Obama isn’t the first spouse to lead a national initiative while in the White House.  First Lady Laura Bush partnered with the Library of Congress to launch the annual National Book Festival to increase parental and child literacy.  And, as part of her Women’s Health and Wellness Initiative, Bush served as the ambassador for The Heart Truth, an organization that “gives women a personal and urgent wake-up call about their risk of heart disease.” And who can forget First Lady Nancy Reagan’s Just Say No campaign?

It’s funny, I don’t remember conservative lawmakers (or media pundits) attacking Bush for telling Americans to read or “wake-up” about heart disease, nor do I recall them lashing out at Reagan for commanding us not to use drugs.  And I certainly can’t imagine a public official, regardless of party affiliation, publicly suggesting that Bush or Reagan were unfit to lead their causes due to personal or physical reasons.  Picture a Democratic Representative telling First Lady Bush to make sure her husband was well read before lecturing Americans on reading and literacy, or articulating that First Lady Reagan, given her petite frame, looked like a skinny wealthy cocaine-head, incapable of lecturing the rest of us on the dangers of drug use.

Whatever one may think about Michelle Obama, at least her initiative is all encompassing.  For those who’ve missed it, Let’s Move is another way of saying let us move.  Let us treat our bodies better by exercising and eating healthier.  And most importantly, let us ensure that everyone, regardless of socio-economic status, has access to these options.  Perhaps therein lies the real issue: a black woman in Washington telling [white male] Americans what to do regarding class disparities, or really, telling white men anything at all?

For those thinking Sensenbrenner’s comments had nothing to do with race (or the location where race meets gender in the bodies of black women), please ask yourself why Reagan and Bush weren’t admonished for their initiatives—in a similar fashion.  The difference lies in not only language (I don’t recall these women using the pronoun “us” when advocating their moralist platforms) but in white female privilege and strategic targeting.  Reagan emphasized drug use and trafficking in urban areas while Bush placed emphasis on women, children and the impoverished.  White men, especially the wealthy, were left alone.

Of course Sensenbrenner has apologized by now, however, only after attempting to put Obama in her place.  And what better way to do that than to police her daily habits (i.e. eating and exercising) while reducing her to her bottom and deeming it abnormal?  Doing so allows Sensenbrenner to maintain a position of power, reaffirm conventional notions of [white female] beauty, and play undisturbed in his little “primitive paradise.”

Unfortunately, Sensenbrenner isn’t the first nor the last to embody such racist and sexist ignorance, and the FLOTUS isn’t the only member of the First family to be subject to its wrath.

Related ItemsPoliticsUS
← Previous Story Transnational Parental – Child Abduction: ’Tis the Season to be Wary
Next Story → Iowa Caucus: What's in it for Women?