Iowa Caucus: What's in it for Women? – The Feminist Wire

Home / College Feminisms / Iowa Caucus: What's in it for Women?

Iowa Caucus: What's in it for Women? 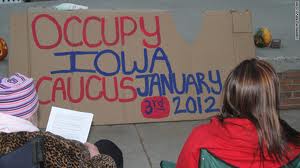 The U.S. ranks 40th in the world for women’s political empowerment and we’re losing ground.

Fortieth. This ranking, based on 2010 data, is a comparative measure of the gap between men and women in political decision-making at the highest levels. (Here is the entire report.) Not 1st. Not 12th. Not 19th. Not 32nd. And, that’s the overall number. Guess what it is for parliamentary representation — legislatures, state and national?

It’s 72nd. Forget having a female head of state. Just considering that in 2011 women lost ground, when our representation in Congress fell for the first time in 30 years, this number can only go down. This is why Iowa’s gender politics should disqualify it for primary caucuses. Iowa has NEVER elected a woman to the Senate, the House or as their governor. Iowa is part of our problem, not the solution.

Our rank has dropped in each of the last ten years. Gives a new meaning to American Exceptionalism. As in: Except Women. I’d warrant that most people think we in the U.S. rank in at least the top five in the world for gender equity (we’re 19th, BTW), especially for women’s political representation. But 40th?

Last Friday in the “Forum” section of The Washington Post, political scientist Jeanne Zaino asked an important question: Given the fact that Iowa has no record of electing women to our legislature or as governor, should it have the distinction, honor and power of holding the first and very important caucus?

No. It should not have that honor. It’s like rewarding it for sexist obstinacy. Trivializing and ignoring it’s deplorable record is a way of rewarding bias, sexism and inequality. It’s how we continue to pay lip service to the concept of gender equality without taking it to it’s logical gender conclusion. Can you imagine a world where these gender numbers were reversed? Now, that would be a “boy crisis” you could really sink your teeth into.

But, the truly sad and shocking fact is how not alone Iowa is. According to the Center for American Women and Politics at Rutgers University, although there are four states (Delaware, Iowa, Mississippi and Vermont) that have never sent women to Congress, half of all states have never elected a female senator or governor.