Soup Maker for the Masses – The Feminist Wire

Soup Maker for the Masses

By Guest Contributor on November 2, 2011 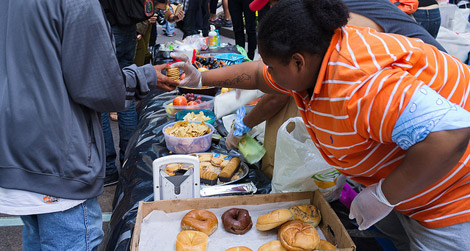 There was a time, that I was on the front lines or behind the fences, in the dark, at night, climbing over them to do the dirty work of a revolution.  I believe in property damage to the man, especially when he / they are going to flood Native American Land once again and all the magic in the world that I have been doing, all the circles I have cast, all the prayers I have said, aren’t going to save the animals or the trees, or the fish that will die once the dam is put in—again.  Did you hear me, I said—again? When the people and culture that are going to be displaced are too precious to lose, I climbed over fences at night to mess with machines that were going to help flood the land.  I don’t believe in the ritual of getting arrested nicely—being put in jail with your friends—and you know your gonna be let out.  ‘Cause I have been in jail alone, unsure of when I would get out and it wasn’t righteous or fun or anything those protestors are going through.  It was watching an heroin addict detox on a cold floor , throwing up, with nothing but my own coat to offer her and you know I debated for an hour about whether or not I was gonna give her that coat cause I was cold, too.  Finally, her cries won out and I still think I forgot the basic rule I learned while I lived on the street—don’t be a savior be a survivor. Still, I can live with myself now so I guess I did what was best.

So I did not get arrested when I climbed over fences, did not clash with the Po’lice.  I did what I did in the dark of night and was fast about it.  Now these years later I cannot climb fences and I don’t dare go down to protests where they are arresting people.  I am on too many medications for that—use a machine to breathe at night, use a wheelchair.  I would be FUCKED if I got arrested. So I go to the rallies where there are no arrests occurring.  I am not on the front line anymore.  No.  I am not behind the scenes anymore.  I cannot climb fences.  But the revolution might be here.  So here’s what I did : soup making.  I’m making soup for the revolution.  I still believe in magic.

Here it is some of the oldest magic I know. It was taught to me by my grandmother, a witch of such strength that she kept a family together on a tailor’s salary, although thank G-d for the ILGWU.  A witch of such magic that when her daughter tried to drive a wedge between me and her by telling her I was a queer, my Orthodox Jewish Grandma said to my lover and I, “I want a picture of you children to put with my other children”—pointing to the wedding pictures.   Although, she would be appalled to hear me call her a witch, she being an Orthodox Jew and all. But what else do you call such a magic maker eh?

She showed me her magic—a smile to the butcher each time she went in and an inquiry in Yiddish after each of his children by name.  This ensured he gave her the coveted soup bones with lots of fat and meat on them.  And with those bones and the vegetables she got from the farm stand and some barley and garlic, I tell you, my Grandmother could make magic.  From these ingredients and the dill she grew in the windowsill she made soup, I am telling you, that fed 12 hungry people.  “The most important thing Shulamith,” she would say to me, “is to cut each vegetable with love, is to pray over the soup for the good health of those who eat it.”  I would watch her move her lips, careful not to season the soup with her tears because that would bring the evil eye.  She would stir the soup and her fat hips would sway, her enormous breasts would move in time with the spoon.  “Come taste—you be the taster- should I add a bisel more salt or a bisel more dill?”  And she would listen to me as I stood on the chair next to the stove as I made the pronouncement and shook the salt in the soup.

Now I am watching people chop vegetables for a chili that will feed 100 people.  Peppers, tomatoes, celery, onions, zucchinis, carrots, parsnips even turnips will go into this pot.  Creamed corn goes in next and then the beans, black and pinto cause I hate kidney beans, then goes into the tomato sauce and the cumin and chili powder.  I pound the garlic and when I do my own enormous breasts tremble.  When I stir the pot, my own generous hips sway, back and forth, back and forth and I taste it, and add, a bisel this, a bisel that and add cilantro till it is everywhere, till it is in my hair and underwear.  I let the others taste it until it is just right but not before I whisper words over the pot, words like sustain, fortify, revolution, strength, love.  I start to chant the words of Che:

“I am not a liberator. Liberators do not exist. The people liberate themselves.”

And “If you tremble with indignation at every injustice, then you are a comrade of mine”

I whisper the greatest prayer of all– that revolutionaries are motivated by love- to be motivated by love which don’t mean you aren’t damned pissed.  I do not let my tears fall in the soup as my grandmother did not, I do not want the evil eye to come to our revolution.  Or bitterness.  It will be hard enough without all that.

It is boiling when we pour it in the buckets to get it to the encampment. It will stay warm in the trunk of the car that is transporting it to the Occupation.  My friends bring it down to serve it in cups and with plastic spoons because the Occupation is not yet self sufficient.  I leave them to switch cars and pack it all up and drive my wheelchair towards the light rail and know the food is a good thing, a real need met and yet I am both fulfilled and a bit bereft.

I can’t say I don’t miss climbing over the fences.  I didn’t imagine that when the revolution came I would be the soup maker but a monkeywrencher.  I miss that.  I miss that as I sit in General Assemblies and listen to debates and ground the energy and carry the rescue remedy.  It is a strange role for an ole rabble rouser to be in but the most important thing is to be of use.  And hold a vision.  And make the magic.  And rise.  The women who came before me taught me to rise.  Now is the time.  I do believe, now is the time.

S. Buchalter is a writer and popular educator who particpates with people in reflections and actions regarding the intersections of such issues as the construction of whiteness and class and the body politics of queerness, fat, transgender, race, poverty and disability.  An alumna of Hedgebrook Farm and a former carpenter, it took her until she was 42 to complete her bachelors degree.  She is a member of a disability collective and works in two places that serve youth and homeless folx.  Each week, for fun and relaxation she studies Torah, soon with a friend as is the best way to do it.

Related ItemsOccupy Wall StreetOCWPoliticsU.S. Politics
← Previous Story Herman Cain responds to sexual harassment claims with what appears to be a lie
Next Story → Cain Accuser Got a Year’s Salary in Severance Pay