Cain Accuser Got a Year’s Salary in Severance Pay 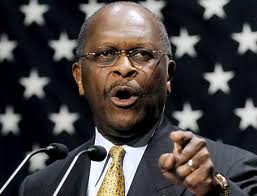 The National Restaurant Association gave $35,000 — a year’s salary — in severance pay to a female staff member in the late 1990s after an encounter with Herman Cain, its chief executive at the time, made her uncomfortable working there, three people with direct knowledge of the payment said on Tuesday.

The woman was one of two whose accusations of sexual harassment by Mr. Cain, now a Republican candidate for president, led to paid severance agreements during his 1996-99 tenure as the association’s chief. Disclosure of the cases has rocked Mr. Cain’s campaign just as he was surging in polls.

Further challenging Mr. Cain, a lawyer for the second woman called on the restaurant association to release her from a confidentiality agreement signed as part of her settlement, raising the prospect that she could publicly dispute Mr. Cain’s account of what happened.  Source: NYT

My hope is that both gag orders get lifted by The Restaurant Association asap.  While history tells us that Cain will more than likely walk away from this with little bruising, and may even continue on toward the U.S. Presidency, these women will have an opportunity to tell their stories, and we will get to see exactly how much of a “straight shooter” Mr. Cain really is (pun intended).  Of course there is a social-political-media price to be paid for this–by the women, particularly if they are African American  (anyone remember Anita Hill?).  That being the case, TFW hopes to be a source of media support to Cain’s accusers.