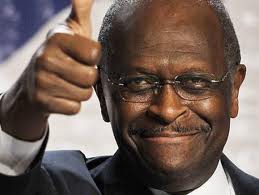 During Herman Cain’s tenure as the head of the National Restaurant Association in the 1990s, at least two female employees complained to colleagues and senior association officials about sexually suggestive behavior by Cain.  Both employees were ultimately paid out by the restaurant group–for their silence and to leave the association.  During a Fox News interview yesterday morning, Cain responded by saying:

It is totally baseless and totally false…Never have I ever committed any kind of sexual harassment.

We’ll have to wait and see how this one plays out.  Ann Coulter has already dusted off her trusted not-race-card by calling the recent turn of events a “high tech lynching.” I’m not so sure about that.  Perhaps Cain might take this opportunity to phone a friend.  As recently pointed out by Andy Kopsa, Cain and Newt Gingrich have an interesting connection.  I imagine Gingrich knows a little something about masking the truth in this kind of situation…

Update: Cain, now aware of the sexual harassment complaints, recently acknowledged that he was aware of a payout in at least one of the cases and that he was [possibly] directly involved in the details of that negotiation.

My general counsel said this started out where she and her lawyer were demanding a huge financial settlement, I don’t remember a number, but then he said because there was no basis for this, we ended up settling for what would have been a termination settlement…Maybe three months’ salary?  I don’t remember. It might have been two months. I do remember my general counsel saying we didn’t pay all of the money they demanded.

Cain told Fox News that he didn’t “recall signing” a settlement, but admitted he may have.  I wonder if Cain will eventually recall inviting one of the accuser’s to his hotel room when they were traveling together on business. His memory seems to broaden by the minute.  To see for yourself, watch Cain play political hopscotch on CNN.