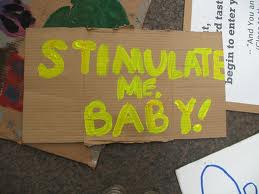 The Oakland occupation was shut the last week of October, albeit temporarily, on the grounds of concerns about safety and security. Sexual assaults of various sorts had been rumored, as well as thefts, drug use, and transgressions on public property. Marijuana use is hardly a major concern in Oakland California, where it has been effectively decriminalized through medical permissions, and the smell pervades the place, but the possibility of a lawless space inviting violence of one sort or another is an image that could certainly garner public support for a crackdown. Images of Waco might come to the surface, the religious cult in Texas where a culture of child rape instigated a heavy state response that cleaned out the compound with resultant deaths. In Oakland, the state actions on October 25 were similarly extreme, seriously injuring Iraq veteran Scott Olsen.

Clearly, today’s political occupations, whether in Oakland or in New York, where I live, are not in any way analogous to Waco. They are not closed cults, vulnerable to abuse by charismatic leaders who are accountable to no one, but open communities with totally open borders. That openness is precisely the challenge to safety and security. As a survivor of child sexual assault myself, I want the problem of sexual violence taken seriously in its own right, not as a pretext for some other agenda.

It’s difficult to get clarity on the nature of the problems that have occurred, or to find any exact numbers or precise descriptions. Rumors abound, Facebook tales are shared and re-shared, stories with unknown origins are passed around. In a way, this is as it should be. The attempt to limit and control women’s talk is usually an attempt to limit and control women. The effort to reduce rape and sexual violence is not enhanced by sequestering all speech to the highly proscribed legal arena, or attempting to shut down the flow of information. Women, the usual targets, share information with each other as a safety tactic, have always done so, and will continue to do so. Watch out for that guy, let me tell you what I heard, or saw, or had happen to me. Such sharing of information among trusted friends or coworkers has often been the best and most reliable way we have to protect ourselves. The so-called authorities, whether cops or sexual harassment ombudspersons, are not reliably reliable, as we all know. This varies by communities, but it’s still difficult in a lot of places to get credible concerns taken seriously.

So the information, stories, rumors, secondhand reports will continue. They cannot realistically be shut down, nor should they be patrolled or criticized, unless there are good grounds that false accusations are being made. Survivors ourselves should go after those who make false claims. We need truth on our side, not bullshit.

Yet there is also the possibility of hysteria mongering by critics of the Occupy movement. So after the Oakland crackdown, I made an effort to find out the real state of things at least in New York, the epicenter that still operates as something of a model for other occupations. I listened in on a working group addressing issues of safety where one of the leaders of the OWS security detail was facilitating a discussion. I was interested to find out that the problems are being taken up in serious and inventive ways. There was much discussion of new protocols that honor survivors, that acknowledge the limitations of the police, and that try to work with, rather than ignore, the differences of power and privilege among us. Don’t shout at someone like you’re military, talk about shared community space, use “I” sentences rather than “you” sentences, think about how white and male and heterosexual privilege can affect our interactions, and our judgments. A discussion from which the NYPD could have benefited.

But also, I was relieved to hear that people are not being liberal about this issue. A groper who harassed several women was called out and pushed out of the park, even though he was homeless. Two assailants were turned over to the police. New protocols have been developed for sharing tents or space under tarps. There is a survivor group, and they speak out. OWS takes seriously the building of a community space. It knows this space has to be safe for all and, that for some, safety is all too precarious. The security squad, mostly folks of color, has members experienced in conflicts and negotiations. I witnessed one demonstrator effectively pushing a hustler out of the park with the threat of publicizing his activities through the people’s mike.

The point is that the occupation in NY is dealing with this problem of safety proactively and, as far as I can tell, pretty effectively. There have been three incidents of safety concerns at OWS: two gropers, one person who threw a punch. All were dealt with aggressively. Sexual assault is a rampant social epidemic, and it is not to be expected that any park – any public or private space or community – can become 100 percent free of it.

This cannot be used as an alibi for state violence to shut down the occupations. Sexual violence is never the priority of the state until it serves some other agenda: to create a scare about daycare, or fan the flames of white racism, or increase surveillance opportunities that might be useful for other purposes. I write this as a survivor myself, as a childhood survivor who lives with PTSD and continues to feel lifelong effects. I take sexual assault very seriously. But this is a totally bogus reason to go after the occupations.

Linda Martín Alcoff is a Professor of Philosophy at Hunter College and the CUNY Graduate Center.  She is the author of Visible Identities: Race, Gender and the Self (Oxford 2006) among others books and currently working on a book entitled Rape After Foucault on the nature of sexual violence and the ways in which survivors are rendered silent. She has one son sleeping at OWS, another son covering it as a journalist, and her partner is in Oakland and participating in Occupied Oakland.

Related ItemsPoliticsrapesexual violenceU.S.U.S. Politics
← Previous Story From Washington Heights to Wall Street: End to End for the 99%
Next Story → Laughing Like Cain