From Washington Heights to Wall Street: End to End for the 99% – The Feminist Wire

Home / College Feminisms / From Washington Heights to Wall Street: End to End for the 99%

From Washington Heights to Wall Street: End to End for the 99% 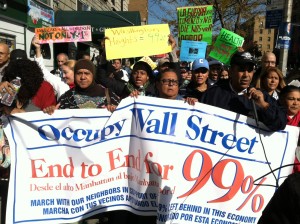 Earlier this week, throngs of Latinos and blacks gathered at 181st and St. Nicholas Avenue in the upper Manhattan neighborhood of Washington Heights in New York City. The group, numbering in the hundreds, had gathered in support of the 52-day old Occupy Wall Street protests and demonstrated solidarity with their encamped comrades by walking almost the entire length of the island to join them in Zuccotti Park (Liberty Plaza), picking up hundreds of fellow travelers on the way. The ambitious trek, undertaken only a day after the New York City marathon, and was intended to increase the unique presence and voices of marginalized populations in this movement against casino capitalism, a dismal economy, and a seemingly bankrupt and ineffectual political machine, among other issues.