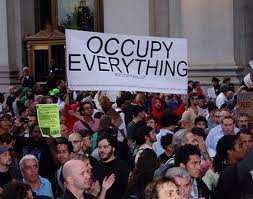 Tuesday, October 11, 2011:   I went back down to Occupy Wall Street today. I’d been down on Saturday, for the first time, with friends Marc and Brooke and Miles. On Columbus Day I went again, on my own. I had other things to do, but as I woke up I knew I just had to go back. Today I found myself there again for the 20 minutes I had between one thing and another. Yesterday, Columbus Day, I spent about three hours – more or less the same time spent Saturday. Both days were beautiful. Both days were completely energizing and exciting. Both days I ran into people I knew. Both days I talked to strangers. Today was greyer and quieter, I wasn’t there as long, but I was glad I went, even for a short time.  Every time I go I feel better about the world than I’ve been able to feel for a long, long time.

“The Beginning Is Near”

This is one of my very favorite signs, which I saw Saturday and again today.  (The signs, in general, are amazing.  There is a great collection of photos of signs (among other things), here.)

One of the things an Occupied Wall Street Journal editorial note, “No List of Demands,” says is, “we just got here.” There is an emphasis on process, on having a conversation, or on having lots of conversations. Yesterday I started talking to a man named John, and then saw a former student, Joe, who was with his friend Jeff, and the four of us stood and talked about Žižek’s Sunday appearance, and the Situationists, and various European inspirations for occupations like this one—and also about United States sources. We compared notes on documentaries we’d seen (The Examined Life; a documentary on the idea of Communism). Joe recommended Frederic Jameson’s collection of exchanges (between Benjamin, Adorno, Brecht, Bloch, Lukács) on aesthetics and politics.  We talked about Brecht’s dislike of actors, about technique vs. expression.  This was our particular conversation, but you could overhear all kinds of conversations going on.

At the same time that there is this emphasis on process, and a refusal to rush things, the organization is breathtaking. Zuccotti park, aka Liberty Plaza (its old name, and the one the occupation seems to prefer), is a very ‘urban’ park – lots of marble stairs and seating, some flower beds, some slender trees.  It’s just the size of one small city block.  The occupation has used tape to indicate corridors and sleeping areas.  There’s tape with a red and white arrow directing toward the first aid station. There are other areas: Kitchen (lots of free food, which looks pretty good really – there is always a line, and there are always people eating), Comfort (blankets, clothes), Art (sign-making), Info, Media, General Assembly. The first issue of The Occupied Wall Street Journal has a nice map.  There are working groups, listed on a board like ice cream flavors, with an invitation to join:  Internet, Town Planning, Art & Culture, Legal, Sanitation, Medical, Outreach, Comfort, Kitchen, Treasury, Media, Direct Action, and Facilitation.

Yesterday, someone was lobbying for a Music working group to organize money for drumsticks and heads. (There is a serious drum circle.)  There are ‘camps’ – these seem to be informal groups of people who have staked out territories and vibes. The Serena Camp announces “no judgments and no rules” and was very tidy.  The Class War Camp has an anarchist aesthetic: One of them yesterday wore a sign that said, “Don’t take a picture: ask me a question.”  Yesterday, there was a guy sitting on the ground with a group of about seven people doing a teach-in about something – he had an easel pad and was saying things about Wendell Berry. Right next to them, unbothered, another group of seven or eight meditated. At one point, someone stood on the stairs where I was sitting and yelled “Mic check!”  This is what you do when you want to activate (or reset – you can see it happening in some of the videos people have posted) the Human Microphone.  He yelled “Mic check!”  and people yelled back “Mic check!”  It wasn’t loud enough, so he yelled again, “Mic check!” “MIC CHECK!” we yelled back.  He had an announcement:  “There will be a direct training action” (“THERE WILL BE A DIRECT TRAINING ACTION”) “at 4 o’clock” (“AT 4 O’CLOCK”) “across the street” (“ACROSS THE STREET”) “at the red cube” (“AT THE RED CUBE”) “come!” (“COME!”).  There was clapping then people went back to doing whatever they had been doing.

“Shit Is Fucked Up And Bullshit”

This is another of my favorite signs.  Those who know me know might think I would not like it for the same reasons I did not like the “Ronald Reagan Sucked Balls” and “I Heart Cops Who Smoke Pot” sign – a carefully painted double-sided number, carried Saturday by a ordinary-looking woman my age.  Her sign totally got on my nerves. But my love for “Shit is Fucked Up and Bullshit” made me realize it wasn’t the crudeness or curse-words that made me embarrassed for/by her. It was the failure to be incisive. “Shit is fucked up and bullshit” is exactly correct.  Shit is fucked up: massive income inequalities, corporations making economic, environmental, health and other policies, money for banks but not for healthcare or education, no relief for victims of predatory lending practices, etc. etc.  And shit is bullshit, in the full sense so well-excavated by Harry Frankfurt: lazy journalists who work from memos and press releases, lazy politicians who just say shit, public discourse that is depressingly brainless, etc., etc.

This is the ubiquitous sign. How much money do you have to make to be part of the 1%?  According to a sign posted yesterday, $1,137,684 (source: http://1of99.blogspot.com). That is a lot of money.  I’m not sure I know anyone who makes that much money. I know of people, yes, and I am sure I know people who know people, but I am really not sure I’ve ever, say, sat down to dinner with someone who makes that much money. Ah, once at least: when, as faculty, I was invited to help entertain donors at a fundraising dinner. Donors probably make that much money. But I don’t really know anyone like that in my real life, the life where we talk about day-to-day things  Even my friends who didn’t become academics do not make that much money.

The only interesting thing about that is that 1% means one in a hundred, and one in a hundred is a lot of people. Most things that affect one in a hundred people are things I regularly encounter. I encounter a lot of people, but I do not encounter a lot of people who make over a million dollars a year. This is not that surprising, of course: people stick together by class. But it means there are a lot of people out there for whom being in the top 1% is just normal.  All their friends are there too. All the people next to them at dinner on a regular basis share their world.  They don’t all like each other, I’m sure. There are all kinds of people, in some senses, I’m sure, in the top 1% — liberals, conservatives, aesthetes, slobs, smokers and non-smokers, meat-eaters and vegetarians, urbanites and nature-lovers, travelers and homebodies, people really into politics and people who are not at all into politics, queer and straight, gay-friendly and homophobic, Jews, Christians, atheists (are there Muslims or Buddhists or Hindus in the U.S. top 1%?  Maybe some…).  The top 1% is pretty white, I feel sure, but not all white (Oprah, e.g.). Anyway, these people, of whom there are a lot, can easily believe they are the world, or at least the United States. There are 311 million people in the United States, right now; 1% of this is 3,110,000.  That’s more people than live in Chicago.  At the same time, for every one of them, there are 99 of us, and the ways they want things aren’t always the ways we want them.

Being down there has made me more emotional than I thought it would. It is like being given permission to want things that it might otherwise seem absurd or childish to want (you know: fairness, justice, truth, beauty, love, music, sky, rest – that kind of thing). Saturday night, after being down there, I was flipping through the New York Times Magazine, and saw a Patek Philippe ad, one of those “You never actually own a Patek Philippe. You merely look after it for the next generation” ads I admit I’ve sort of admired, as ads. This time, I felt repulsed.  Feeling repulsed felt like feeling like my true self again, or finally, or something. Those fucking fuckers, I thought. (That’s another of my favorite signs:  It was black marker on a scrap of pizza box cardboard, and just said “Fuck!”)

(If you don’t know the Patek Philippe ads, you can find the one I mean here.)

Sunday, October 16, 2011:   I was out again yesterday for almost twelve hours.  One of the best signs I saw Sunday was made to look like a traffic sign, and said “Caution: People Thinking!”  The General Assembly is an amazing instance of this, and of patience, thoughtfulness, respect, and collective intelligence.  “General Assembly” is the OWS’s name for a general meeting (it’s also the “ga” in www.nycga.cc, one of OWS’s websites).  The General Assemblies are democracy in action.  (Some facilitators and others describe the process here.)  Many are now writing and posting, thank god, about specifics – there are many things to be done to break the grip that wealth has on politics and policy. I have done little of that here, but I hope this dispatch, which started as an email to friends and family, gives something of the flavor of the occupation itself, and of the amazing newness the Occupy Wall Street “movement” has brought to a newly re-occupied public sphere.

Some of you are in New York and some of you are very far away.  I hope you can all occupy something, somewhere.  That’s another thing – the signs that say “Lost my job; found my occupation.”  Being there feels like being, as Naomi Klein put it, part of “the most important thing in the world.”  I hope you all can be part of it too, in whatever way, wherever you are.

Jennifer Uleman is Associate Professor of Philosophy at Purchase College (SUNY).  She is author of An Introduction to Kant’s Moral Philosophy and various articles and reviews on Kant’s political and legal theory.  She lives in Jackson Heights, Queens.

Related ItemsPoliticsU.S.U.S. Politics
← Previous Story From the Editors on "Occupy Wall Street"
Next Story → America's Autumn: A Time for Growth Amidst Struggle