Safe Space: The Language of Love – The Feminist Wire

Safe Space: The Language of Love

Content Notice: This article is part of the #LoveWITHAccountability forum on The Feminist Wire. The purpose of this forum and the #LoveWITHAccountability project is to prioritize child sexual abuse, healing, and justice in national dialogues and work on racial justice and gender-based violence. Several of the featured articles in this forum give an in-depth and, at times, graphic examination of rape, molestation, and other forms of sexual harm against diasporic Black children through the experiences and work of survivors and advocates. The articles also offer visions and strategies for how we can humanely move towards co-creating a world without violence. Please take care of yourself.

There is a practice of erasure that happens in traditional Christian church communities.  The systemic erasure of those who carry the weight of having such truths as sexual assault and domestic violence/gender violence forced upon them…those whose understanding of God, love, community and self is often structured around violations against body and spirit…this erasure makes the church a safe space for those who want to avoid the ugly reality that these behaviors and conscious decisions are made (often) by those we trust, in community and spaces we have designated as sacred. We are programmed to embrace spiritual rhetoric that shames and silences those who have been victims of sexual assault (regardless of gender identification).  This same rhetoric is often used to fill the uncomfortable space that exists in communities where sexual assault (primarily during childhood) has occurred.  The use of clichés such as:

God won’t put more on you than you can bear,

All things work together for the good of them who love the Lord…,

Just pray about it,

and other biblically based phrases and sayings rather than engaging violations and violators head on often discourage victims from speaking out about their abuse/abuser.  It is important that we provide space for these conversations to happen and truths to be shared proactively, with full understanding that there will be discomfort but, through honesty and full disclosure there can also be hope for healing.  To espouse a system of avoidance and silence is to espouse the alienation, physically, and spiritually of those who have been relegated to the margins of the intricate tapestries woven together to form the beloved community. The margins are the spaces that give value to the common space that is shared in the middle ground.  The margins have importance and relevance to the big picture. Childhood sexual assault is too common to be treated as anomaly.  By addressing it, in community, we can open up a space for healing for those living with the shame of being violated as well as those living with the shame of having violated another.  Love calls us to accountability in the ways we form community and responsibility in the ways we maintain it.

On First Times (*Trigger Warning: This is a rape story)

The first time I was raped

the act was not as painful

I must be at fault

as if it were yesterday

I never wore it again

and he was light-skinned

hadn’t seen him before

he thought I was cute

I didn’t believe it

too dark to be the right shade

for light-skinned to holla at

I never wore it again

I think I told you that already

I still don’t trust my mother

I don’t think she ever has

what was we talking about…oh yeah

and I just kept walking

because I’m not supposed to attract boys

this is what causes problems at home

why they calling here?

you don’t need no boyfriends

they calling because you just want to be fast

they only want one thing

I just want to be liked

at home and at school

about being a ‘peculiar people’

don’t want to have sex or be sexualized

don’t want to always be so different

can’t be in marching band because THOSE kids…

my friend and I

he and I liked to talk

and I don’t go to school to make friends

I go to school to learn

because he knows the chill of ice

even when it’s over a phone line

and even though it’s all related

the first time I was raped

remember walking up the stairs to our apartment

I remember being groped

I remember being raped

I remember being raped

I remember trying to convince my mind

that this was not so bad

that if I stayed still long enough

maybe he would get bored and stop

that at least he thought I was cute

that he was light-skinned

and light-skinned was a compliment for dark-skinned

I remember my body refusing to cooperate

I remember not fighting

and hating all 85 pounds of my lethargic flesh

I remember the silence of the house

how his voice reverberated off the walls of my ears

and believe it or not

it was not the act

that made it mourning clothes

the “you shouldn’t have been wearing THAT outfit”

that turned it into shroud

and this story was never told

I was never asked

so I didn’t tell

how we celebrated the healing

but never talked about the hurting

and how the hurting 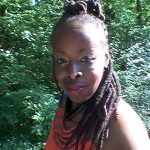 Kimberly Gaubault is a mother, grandmother, preacher, poet, singer, musician, Social Justice activist, advocate, lecturer and educator. As a survivor of Domestic Violence/Gender Violence and sexual assault, Kim seeks to empower those who have been affected by such horrible acts of violation.  Kim served the Duke University Community as the Program Coordinator for the Women’s Center for 3 years and continues to work towards solutions in regards to matters of social justice.  She uses her art, knowledge and experience as a vehicle of intervention and healing in the church, the academy and the community, nationally and internationally.  Kim holds a dual BA in English and African and African American Studies with a certificate in Women’s Studies, from Duke University, and an M.Div from Union Theological Seminary, in the City of New York, with a concentration in Theology and the Arts, Interreligious Studies and Interfaith Dialogue. Kim’s philosophy of personal interaction is “If I’ve not positively influenced someone everywhere I go, I’ve not walked in my purpose.”