In My Mother’s Name: Restorative Justice for Survivors of Incest – The Feminist Wire

Home / Black Boys / In My Mother’s Name: Restorative Justice for Survivors of Incest

In My Mother’s Name: Restorative Justice for Survivors of Incest

___________: I, Marla request that you no longer appear at my home due to past crime committed to self lasting several years, non provoked; Crime consisting of both physical and sexual abuse. When in your presence you are not to put your hands on me in any shape or form. Because of you, I have suffered detrimental effects, which have intruded constantly into my life, affecting me as a woman and human being.

I am the daughter of a survivor of physical and sexual abuse.

During my mother’s childhood and all throughout her adolescence, she was repeatedly physically and sexually abused by her older brothers. All of whom have never been held accountable for their actions. All of whom have been and continue to be protected by the pervasive silence, secrecy, avoidance and denial that seem to be entrenched in my Black family.

As early as eight years old, I can recall my mother, Marla, telling my brother and me about her experiences of sexual and physical abuse during her childhood at the hands of her brothers. Coming from a home of parental absenteeism and neglect, my mother’s only form of escape from the abuse was becoming pregnant at age sixteen by a boy who she “sought emotional comfort from.” In my mother’s attempt to tell me of her abuse, I was unable to fully grasp the depth of what had happened to her. At the time, I couldn’t even begin to conceptualize the abhorrent act of sexual violence. However, I was acutely aware that her experience shaped how she chose to mother me, her only daughter. I can recall that regardless of my mother’s financial status as a single parent raising four children, at each place we lived, I always had my own room. Even if it meant that my brothers went without one. Additionally, my mother was attentive to what I wore and she was extremely sensitive to how boys and men reacted to me in public; especially since I always presented older than what I was because of my Amazonian physique. In one case, I can vividly remember my mother confronting a man in public, who had attempted to engage with me inappropriately.

Unfortunately, my mother’s experience of physical and sexual abuse is not unique. According to a 2014 study on sexual abuse, the U.S. Department of Justice found that an estimated 1 in 4 girls and 1 in 6 boys are sexually abused before the age of 18. In 93% of the cases, the perpetrators of the abuse were a family member or someone they knew. For Black women and girls, 60% of black girls experience sexual assault by the time they reach 18 and for every black woman that reports her sexual assault there are at least 15 black women who do not, according to the preliminary findings by Black Women’s Blueprint. Additionally, given the legacy of historical trauma in the Black experience in the U.S, coupled with the incessant subjection to violence and victimization under a white supremacist, capitalist and patriarchal regime, Black women and girls are often shamed into silence out of the need to sacrifice themselves, in order to protect the “Black race.”

In her book, No Secrets No Lies: How Black Families Can Heal from Sexual Abuse, Robin D. Stone, identifies the following as the cultural taboos and social dynamics that Black women and girls have to navigate, in addition to the sexual abuse they endure, when confronted with incest and other forms of child sexual abuse in a familial context:

Given this, in order to appropriately support Black women and girls who are survivors of incest and other forms of child sexual abuse within the familial context, in my experience, it is imperative that a restorative justice healing framework be realized and implemented, where the needs of women and girls survivors are centered.

In my personal experience, despite the physical and sexual abuse my mother endured at the hands of her brothers, in her adulthood, she maintained contact with them. In fact, during my childhood, she allowed my siblings and me to spend the night in their homes un-monitored. Granted, by this time, her brothers had families of their own and in my personal experience, when I went to their homes, I was neither harmed nor did I ever fear for my safety. I say this to say that in my Black family, where abuse was and still may be present, the survivors and perpetrators are in contact with each other. And if contact is inevitable, it should be done so in a restorative justice context.

Restorative Justice (RJ) is an indigenous practice that has been used to mediate conflict for centuries. However, it was introduced in the 21st century as theoretical concept by John Braithwaite, Howard Zehr, and Mark Umbreit (and others). RJ is a non punitive process that seeks to mediate conflict between victims, offenders and the community at large, for the purpose of healing harm and fostering rehabilitation for all parties involved. Moreover, for families, RJ involves “acknowledgment of fault by the offender (and family), restitution of some sort to the victim, including both affective apologies and material exchanges or payments, and often new mutual understandings, forgiveness, and agreed-to new undertakings for improved behaviors.” RJ re-connects offenders back to the family rather than isolate them, while holding the offenders accountable.

Additionally, if RJ is to be realized as an effective framework for Black families to heal survivors, offenders and the entire family from sexual violence, as well as to dismantle familial sexual violence, the healing needs of Black women and girls must be centered. When Black women and girls are centered in this process, RJ creates the space where they are empowered to decide what justice is. They also have the power to choose to forgive and accept restitution or reconciliation, or not, as well as to choose what they think is the proper balance between reconciliation and family peace. And the first step to centering the needs of Black women and girls is to believe them.

Unfortunately, my mother will never have the opportunity to experience the process of RJ because she died prematurely as a result of negative life outcomes that were a direct result of her childhood experiences of physical and sexual violence. However, she devoted the latter part of her life to healing herself, reclaiming her power, confronting her abusers and raising a daughter who would one day call out and disrupt the pervasive silence, secrecy, avoidance and denial regarding physical and sexual abuse that seem to be entrenched in her Black family.

I am the daughter of a survivor of physical and sexual abuse,

I claim healing in my mother’s name. 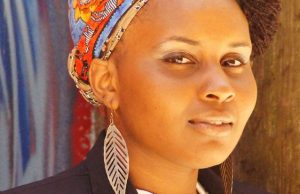 Liz S. Alexander MA, MSW is a thought leader, public servant and advocate for justice involved youth. A recent transplant from Chicago, Liz has extensive experience working in a program administrative capacity supporting system involved youth. Liz is the founder of She Dreams of Freedom, a project that raises awareness about the plight of girls in the juvenile justice system, while also providing a platform to empower the voices of girls in the juvenile justice system. As a restorative justice practitioner, Liz is committed to working in partnership with justice involved girls to end the pipeline of girls into the juvenile justice system. In 2015, Liz was recognized as a “40 under 40” Young Woman Professional Leader by Demoiselle 2 Femme, a trailblazing organization serving girls on the South Side of Chicago, and most recently she was named as a “ Woman of Influence” by the YWCA of New York City. Liz received a Masters of Social Work with a focus in Trauma and Violence from the University of Chicago, School of Social Service Administration and a Masters of Religious Leadership with a concentration in Social Transformation from the Chicago Theological Seminary. Liz received her Bachelor’s of Arts degree from Spelman College where she majored in Sociology.