There are about as many higher education institutions in this country as there are prisons, and all but Columbia and the University of California are financially invested in the prison.[1] Hampshire College, where I am a student, made steps towards becoming the third exception late last year when it amended the language of its investment policy to include private prisons on a list of industries not favored for investing. This decision was in response to the demands of the student-led Decolonize Media Collective, which “worked to ensure that Hampshire College does not financially support the mass genocide, in the form of the prison system, against Black and Brown people in the United States.”

Since this decision, I have been thinking about the relationship between the prison and the university: the ways in which the two are mutually supportive and how intimately they are invested in one another. There are, of course, material investments: universities have historically relied on prison labor to produce desks and chairs for classrooms and make financial investments into hedge funds that sustain and expand private prisons (Hampshire included, even after its policy change). But what other kinds of investments do universities make that support the prison? In particular, investments that aren’t necessarily tangible like money?

Universities are producers of knowledge. Both the university and the prison seem to be in the business of producing knowledge about human worth. To an extent, those of us who have enrolled in higher education have bought into the idea that the university makes people more valuable. As students, we spend thousands of dollars to go to college, and we get nothing tangible in return—no car, no house. Instead, we understand the investment as one that will increase our value. We literally become worth more with a college education and we believe that our future paychecks will reflect that. It’s how we plan to pay off our debt. Put another way, when we pay tuition, we are investing in the idea that our social value increases with a university education.

On the one hand, society’s most valued and legitimate—the scientists, doctors, academics—are all products of the university. And on the other hand, society’s disposable and most undesirable—the prisoners—are products of the prison. In this way, both the university and the prison are sites that cultivate either value or disposability in people. The university’s production of valuable subjects and the prison’s production of disposable subjects both rely on the idea that there is a hierarchy of human value. This hierarchy is deeply racialized and gendered. We only need to look at the demographics of universities and prisons to see this. The university cultivates value in the human bodies already deemed to have worth—generally white and middle-class people, who are the majority of people we see when we look at university demographics. The prison, meanwhile, affirms the disposability of Black, Brown, trans, and queer bodies who are already marked as less valuable and who fill prison cells. So, when the university functions to increase the social worth of a mostly white, gender-normative, middle-class population, it is also contributing to the devaluing of populations who do not fit these demographics.

Additionally, it is the authority of the university that directly determines who becomes a prisoner. Consider what happens when a person enters the courtroom with a criminal charge. Who are the other people in the courtroom who take part in the process of producing a prisoner? They are the psychologists, criminologists, medical examiners, forensic scientists, and, of course, the lawyers and judges. All of them are products of the university. They each have multiple degrees, and they are there precisely because of these credentials. When the university grants them these credentials, it is also granting them the authority to judge the defendants—to speak on their behalf, question them, question others about them, assess their character and mental health, and paint a picture of who they are and what kind of lives they have led. The credentialed potentially determine what conditions the defendants will live in for the rest of their lives. When the judge hands down a prison sentence, it’s the power that has been vested in that judge by the university that makes that sentence binding. In effect, it is the university—speaking through the judge—that makes that sentence real. It is the university that turns the person into the prisoner. In short, the process by which the state produces prisoners simply could not function without the university. And the power of the whole legal system itself is a direct expression of the university’s power.

On many levels, the university is essential to the basic functioning of the prison: (1) it reproduces an existing hierarchy of human value that marks populations as disposable; (2) it produces the valuable subjects that the prison then purports to protect; and (3) it is the power that gets embodied by individual actors within the legal system to ultimately declare who becomes a prisoner.

What does this mean for those of us who are not only financially invested in the university, but also ideologically invested in it as an institution that makes us more valuable? How do we go about resisting the prison from this position?

In the 1970s the Prisons Information Group (GIP)—an activist group led by French academics and intellectuals, including Michel Foucault—provided one model, which is to use the power given to them by the university to project the voices of prisoners. Importantly, voice is one of the indicators of where you fall on the scale of human value. Prisoners are systematically denied voice. Every possible mode of communication—their phone use, Internet access, written correspondence, and visitations—is restricted and censored. Academics, on the other hand, have multiple, far-reaching platforms—journals, classrooms, and publishing houses—that cater to making their voices heard. The value of professors’ voices is even built into the architecture of universities, where lecture halls provide a platform for them to speak and an audience to listen.

Resisting the devaluation of others means we must resist seeing our own worth as being tied to our education. It may also mean devaluing our own voices, as GIP attempted to do. It seems that for the GIP, resisting the prison also meant resisting the university. So, as students (former, current, or prospective) pushing towards financial divestment, we must also begin to think about what an ideological divestment campaign might look like.

What ways might our prison resistance require us to also resist the university, and our own subject positioning within it?

[1] Although Columbia and UC no longer invest into private prisons directly, both institutions invest in banks and corporations that do. 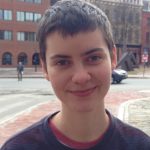 Bella Week is a first generation Australian currently living in the United States. Before starting at Hampshire College, Bella organized around queer justice in Los Angeles. She spent this past summer interning with the Sylvia Rivera Law Project in New York.