He would cut into the belly

of one, at the kitchen

in the background, and he’d be

up to his elbows in silver,

blood shining from the knife,

the room smelling of sweat,

boots, coffee, smoke, and though

I’d been at home

in bed the whole time, I could

see the Puyallup River, the herons

blackbirds with their bottlebrush

shapes and streaks of color,

from shore to shore a thick fog,

but rolling up and off like smoke, a reel

singing as the steelhead ran

with the line, the hurry, the thrash

along the shore to keep up,

to keep the line from getting cut.

Surely this was a victory for them,

Father saying it’s a female, then

to show my brothers.

Yes, he is saying, we’ll use the roe

as our next bait, and How about

Saturday, early? He holds them up

in front of the window, though I was never

actually there to see it, scales smeared

on the faucet, on the hump between

the two sinks, his forearms

all silver and orange on fire. The guts

and severed head lay in a mass on

through the raised orange

globes. Yes, good thing this was a female.

“We are drift and flotsam. . .” Stanley Plumly

It isn’t the purse,

green or not, nor the way her husband

gave it wrapped up in a little parcel,

nor the way she says he crept

into her bed that morning—and I think

of her hair unraveled down her neck,

the cotton nightdress mussed from sleep,

curled on the comforter—.

However I imagine the scene,

it starts with her and stays January 25th,

all the things I had.”

It isn’t what she says, the “fine

frosty day, everything brisk and cheerful,”

nor the nonstop train, exactly caught,

the reading while she rode, the Picture Palace—

within each ticking body, mortality clock,

bundle of desire set into say.

All children, we go walking into light,

wanting to step out onto the fresh-cut lawn,

yes, our shoes staining green, and to pick

the poppies or sunny daffodils

without a word raised against us.

Days given as though

they were light, and they are, photon and ray

and particle. What is left

“I was also given a packet of sweet

after the painting by William Adolphe Bouguereau

At first glance, a standard scene—

a girl sitting on a stone block

near the woods while a nightingale sings.

But there’s something heartbreaking

caught in her face, something that speaks

of the tragedies of class, of chores

repeated until the body becomes

as worn and beaten up as a shoe.

with a solemn attention that’s also

weary. What do the bird’s sweet notes

have to do with her? Yes,

she’ll link arms with her love

at dusk and stroll here listening

to the trilling bird, but there’s no denying

are red from work and her feet,

though neatly crossed, are bare,

calloused on the soles, no doubt,

and cracked. The whiteness of her arms,

will have to be sacrificed. Before long,

she’ll be pregnant, and then

again. Isn’t that part of the thought

in the face, the dark knowledge

of what lies ahead? She would seize

a chance if one were offered,

and she’d make as much of it

as possible—so say the brown eyes,

the spot of red above one cheek.

In reality, though, the painter’s named

and she’s not. Finding her grave—

for she’s long since dead—would be

impossible. Her sole moment of fame

remains this pose, the brushstrokes

by his hand in somber hues. 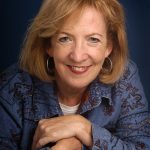 Patricia Clark is a poet with four books, most recently Sunday Rising (2013). Wreath for the Red Admiral, a chapbook of poems, is due out in August 2016. Her work has been featured on Poetry Daily and Verse Daily, also appearing in The Atlantic, Gettysburg Review, Poetry, Slate, and Stand. Recent work appears (or is forthcoming) in Kenyon Review, New England Review, Southern Humanities Review, North American Review, Prairie Schooner, Michigan Quarterly Review, Superstition Review, and Plume. A professor in the Writing Department at Grand Valley State University, Patricia was poet laureate of Grand Rapids from 2005-2007.

These poems have appeared in print previously: “Male/Female” in Slate magazine. Additionally, that poem appeared in my book My Father on a Bicycle (pub in 2005 by Michigan State Univ Press). Also in that book was “La Chanson du Rossingol.” Lastly, “The Green Purse,” my homage to Virginia Woolf, appeared in my first book of poems, North of Wondering.

Related ItemsEconomyFamilyfeminismPoetryviolence against women
← Previous Story Ceremony of Innocence: a poem about a binary by Catharine Wright
Next Story → Arts & Culture: “Back Door Shoes”