drowned her seven sons as infants.

When the Vasus were still

unborn she vowed to release them

from their mortal forms before

she pretended to be human

and married a king who swore

to never question her. I too pretended

much for mother’s sake,

swallowed tumult of the adolescent

thrill of wrestling the other boys

in our neighborhood. At night

we kept our windows unlocked;

in my braids as milkweeds

and fairy wands, myself a wild flower.

The king broke his promise

and stayed his wife’s murderous hand.

She returned to the blind dolphins

and perched atop a gharial.

The son ripened and his body

betrayed him to its flood.

Did she make a compact before

she made my body from her clay?

Would my father have tried to drown

me in the baptismal font,

himself, if he knew

some sons won’t be damned?

Son, you are fit

only for the greasy smoke

of the body burning on its pyre,

of women’s hair and liars’ teeth.

for a lowly birth,

this sea you must cross on a craft

lashed with your own bones.

Fool, you have not given me

a son’s gift, nor caressed

a woman’s breast as a field

that will feed for generations.

You can’t arrest the blood

vessel mid sea. I could wait

one thousand years for you

a woman’s swollen belly over the bow.

But you are an imposter, suckled

at a dead heifer’s teat,

a blight on this line, dropped

in the stable eating

You’ve refused me your youth

and for this, my palace will torment you

with rubies you bleed

when thorns prick your quick.

to which mount you belong,

you will look into their eyes

with cow shit stoking a flame.

Vivah at the Durga Temple

Draupadi, did you take all five brothers

at once, each man squeezing the Mount Meru

of the other man’s nipples in excitement?

India was inscribed on your skin. When

Duryodhan pulled your silk did it prophesy

Sanskrit’s own unraveling; the partition

of desire by seen and unseen?

The Shiv Sena will assassinate me for saying

you know what I mean. But what of your choice?

Brahmins malign you for their own myopia.

Were you between the brothers at night or

veiled, did you slide down the balcony and

into the tongue of Lalita’s holy fire?

With your first coolie-man you relax your tongue,

don’t lock your closet doors when you light the stove

trying to keep the curry out of your cotton.

He wonders, Is this what it’s like for everyone else?

as he breaks one hundred glass churdiya against

the white wall of your Little India walk-up.

The rainbow shards in your sole erupt from the skin’s

You feed them threads of folksongs from your silk

bruises and you open the windows. Falling in the cane field

you rouge your face. It’s too late. The bottle drank

him whole and his jamun berries stain your skin.

Crossing the Black Seas for a foreign country

the flying bird gets loses its bearings in love’s colors.

These poems come from Rajiv’s next book manuscript The Cowherd’s Son as well as one from his dissertation project. The first three rely on queering Hindu mythology, and the fourth one is a “chutney poem.” 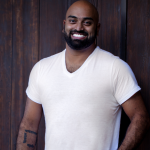 Winner of 2015 AWP Intro Journal Award and the 2014 Intro Prize in Poetry by Four Way Books for his first full-length collection The Taxidermist’s Cut (2016), and recipient of a PEN/Heim Translation Fund Grant, Rajiv Mohabir received fellowships from Voices of Our Nation’s Artist foundation, Kundiman, and the American Institute of Indian Studies language program. His second volume of poetry The Cowherd’s Son won the 2015 Kundiman Prize and is forthcoming from Tupelo Press. His poetry and translations are internationally published can be found in Best American Poetry 2015, Quarterly West, Guernica, Prairie Schooner, Crab Orchard Review, Drunken Boat, Anti-, Great River Review, PANK, and Aufgabe. He received his MFA in Poetry and Translation from at Queens College, CUNY where he was Editor in Chief of the Ozone Park Literary Journal. Currently he is pursuing a PhD in English from the University of Hawai`i, where he teaches poetry and composition.