Down in the Dirt

Yell through the shotgun
and all that bellows
the flash of life between
the roots.  Decomposing
burrow, brows on fleek,
despite the honest nest.
Flight like a blast.
Tell that smoked out
hunk, fog, and black
cloud that make
you go insane, that blur
your tongue and taste.
Let ‘em know
you didn’t ride here
to put on a show, or fuck
around, or break, or howl.
Whisper to them crocked
rocks, pointed moons
striking stars out.
Tell ‘em all
you never came
to stand back

and watch them
trick or disturb
the night. You get down
in the dirty dark, and do it right.

Tonight,
sick of Sabbaths
I am hunting homes
in rivers.  Sticks of water
hold to nothing and soak the print
off spines. I have the laugh of a queen,

diplomacy of a joker. Air leaves
me thicker than the trees. Breath
dries every longing
to the dirt. 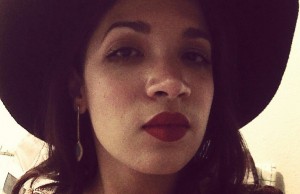 Silvia Angulo is an anarcho-syndicalist proletarian feminist poet.  She was born in the Dominican Republican and grew up in New York City.  Her work has appeared in The Feminist Wire, Bitch Magazine, La Galeria, Wolf Willow Literary Journal, Brasilia Review, Haggard & Halloo, among others.  Silvia received a BFA in Fine Arts and Filmmaking at The City College of New York.  She is also a part of Af3irm National and other community channeled collectives.   Silvia is currently getting her degree in Paralegal Studies at Los Angeles City College, and hopes she can inspire women especially women of color to find and use their voice to combat injustice.