“Ofelia Looks for Anger at the Metropolitan Museum” by Alexandra Teague

Ofelia Looks for Anger at the Metropolitan Museum

When she learned women can be anything, she didn’t know

sloping like moonlight toward her ribs, or Beauty’s dress

of columbine? (when it used to mean a flower)—or Purity

absconded from personality, that rustling hive of body

or a taxidermied cat. All glazey eyes and curves

hardened to hold meaning in. How not one will ever flinch

or drop her thorn of vice, or wear a sweatsuit

with Sweetie written on the ass to sleep alone. It’s hard to argue

specifics with a concept, but she wants to say Memory,

set the fucking mirror down. Stop gazing all dreamy

at how dreams and youth must fade. You’re like a Barry Manilow

song, each word headed for ruin, like that Dietrich movie

where she played a model but the censors censored

all her posing, left the statues. Cut blood and flesh

and woman. Song of Songs. She’s not a prude, but sometimes,

you can keep your clothes on, like in this atrium

airconditioned so the art won’t spoil. At least

Cleopatra (with her handy asp) has attitude. A name

you could name something living. Here, Cleo! Here, Kitten!

a good martyr. How resigned sorrow had banished her smile,

but not her sweetness. How she’s nobly groping

through rubble, breasts exposed to mean whatever

a woman’s body means after a volcano explodes 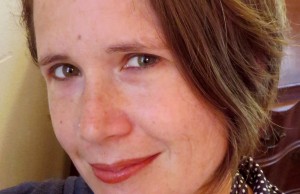 Alexandra Teague is the author of two books of poetry:  The Wise and Foolish Builders (Persea, 2015) and Mortal Geography (Persea, 2010), winner of the 2009 Lexi Rudnitsky Prize and the 2010 California Book Award for Poetry. The recipient of a Stegner Fellowship, a National Endowment for the Arts Fellowship, and the 2014 Missouri Review Editors’ Prize, Alexandra is Associate Professor of Poetry at University of Idaho and an editor for Broadsided Press.