What has the “nation” got to do with it? A Case of Sedition – The Feminist Wire

Home / Activism / What has the “nation” got to do with it? A Case of Sedition

What has the “nation” got to do with it? A Case of Sedition 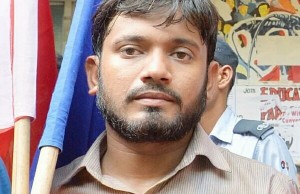 On February 12, 2016, Kanhaiya Kumar, elected President of Jawaharlal Nehru University Student’s Union (JNUSU), was arrested by the Delhi police at the behest of the Home Ministry of India on charges of sedition. Allegedly, Mr. Kumar had raised anti-national slogans at a meeting in JNU while protesting the recent hanging of Afzal Guru, the main accused in the attack on the Indian Parliament in 2001. Kanhaiya Kumar’s arrest and that of his cohorts has since created a firestorm. The Hindu, a national newspaper, called the arrest “use of state power to silence dissent” and “using a narrow nationalist discourse to put all critics of the government on the defensive.” Another newspaper, called the incident as “government using legal tyranny to crush dissent,” especially at a University known for its history of keeping right-wing politics at bay. The same newspaper charged Prime-Minister Narender Modi’s government for “aggravating polarization to hide its many failures, especially economic ones.” In promoting an ultra-nationalism that is narrowly based on ethnic/ religious identity as opposed to an inclusive, capacious one, the current government demotes democracy and freedom, the newspaper concludes.

On March 3, 2016, Mr. Kumar was released on bail. In his speech at JNU, he declared that he wants “freedom in India not freedom from India.” And India, he said, is not the personal property of the current, right-wing Hindu government. The government, he said, cannot decide what or who is Hindu for the very idea is a fallacy. In attempting to determine “Hindu” identity and its accompanying nationalism, the government, Mr. Kumar asserted, was complicit with colonial modes of autocratic rule. Sedition was one such mode. Section 124-A of the Indian Penal Code (1860) describes sedition as “any action, which brings or attempts to bring into hatred or contempt  or excites of attempts to excite disaffection towards the government established by law in India.” It even defines “disaffection” to mean “disloyalty and all feelings of enmity.” Mahatma Gandhi was tried for sedition under the same section. He later declared the section as “designed to suppress the liberty of the citizen.” India’s first prime-minister, Pandit Jawaharlal Nehru, had declared the “offense of sedition as fundamentally unconstitutional and that it has no place for practical and historical reasons, in any body of law that may be passed.” “The sooner we get rid of it, the better,” he said. 65 years later, the section is still alive and kicking its free citizens in the face. It remains the most powerful instrument of the state to be wielded at its will as we saw in the case of Kanhaiya Kumar. Its value today is to curb any forms of dissent against the state. And dissent we know is the only condition for reasonable government. In a way, section 124-A is “anti-India” and not Mr. Kumar. 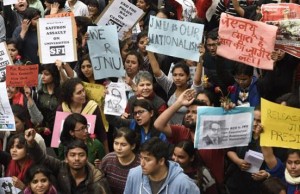 As a former student-activist of JNU, I stand with Mr. Kumar. As a former citizen of India, I support Mr. Kumar’s defense of his citizenship. So my politics is not my problem in this case. I take issue instead with the idea of nation/nationalism  and how these remain unquestioned even as their meanings are altered, re-defined, and reclaimed on both sides of the aisle in this instance. Everyone wants to claim their nationalism is good and their idea of nation is inclusive under certain conditions. Mr. Modi claims it. Mr. Kumar claims it. Indian national newspapers claim it. To change the debate on what is India and who is an Indian, we have to change the terms of this debate. This means we have to dispense with the idea of the nation just as we have to do away with section 124-A. Both are useless relics from the colonial times. In his 1993 essay “Patriotism and its Futures,” anthropologist Arjun Appadurai declared, “we need to think ourselves beyond the nation.” His is probably a moral-political demand based on the perception that the “legitimacy of the modern state is in crisis and its capacity to act for the good of the people is exhausted or undermined.” Appadurai’s argument is based in globalization—how new transnational forms of solidarity, especially through social media, have undermined nation-state sovereignty in that these states are feeling incapable of guarding political/social spaces from the world’s eye. In this world of Twitter and Facebook, everyone knows everything about anything. In this world, nation-state is not safe. The political elite in charge of the switch-boards of this nation-state no longer claim sovereignty over it. The nation-state is naked to the world. The conduct of conduct in this space is visible. Everyone knows your business and makes it their business as much as they can. This transparency is exactly what makes the egotistical nationalists react in the way the Modi government did towards Mr. Kumar’s alleged anti-national statements. It tried to shut it down. But this is exactly the other problem in this transnational media space. It backfired—on the government. In just half a day, Mr. Kumar’s speech had been viewed over 380,000 times on YouTube. I expect the number to reach a quarter of million before the weekend. This is the nation-state’s biggest worry. It is not surprising then that the same government tries to censor social media in India at every opportunity it can find. A nation-state’s dirty laundry cannot be a pretty sight, even for its harbingers.

Partha Chatterjee as an interlocutor for Appadurai’s essay posits a different idea—of going within the nation, locating its troubled spots first before thinking ourselves beyond it. He goes to the heart of the problem with the idea of nation. He argues that in India, the “circle of elites,” while being committed to the “establishing of new ideas/institutions” of national civil society, was also committed to a “selective adoption of cultural forms of Western modernity.” These, he goes on, “were put through a nationalist sieve, selectively adopted, and combined therein with reconstituted elements of the indigenous tradition.” “Spiritual/ material dichotomies were used to justify choices from a nationalist standpoint.” Dichotomies like inner/outer, home/ world, national/colonial were created to imagine a sovereign nationalist space especially under conditions of slavery. This was the point of genesis of the Indian nationalism as we know it today. But this is not all. Chatterjee says this work of nationalism in the 19th century points to a different possibility—“of a different form of mediation between the population and the state being imagined, one that would not ground itself on a modernized civil society.” It is this arena of nationalist politics that, Chatterjee adds, “became the site of strategic maneuvers, resistance, and appropriation by different groups and classes.” The nation-state, as every Indian knows of it, is therefore characterized by “failure of effective governability” and “decay/lack of appropriate civil institutions that provide a proper relationship between autonomous individual lives and collective political domain of the state.” This is where we hear complaints about the nation-state’s tyrannical ways by those at its receiving end, like Kanhaiya Kumar. 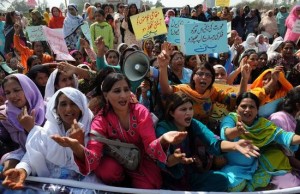 My other issue with the selectively modern idea of the nation is that it is patriarchal in concept. Its spiritual sovereignty was devised on the female body and mind. She became its representing image, an image that didn’t speak. She just behaved appropriately. Nation is also discursively patriarchal. It is the result of a discursive combat between colonialists and nationalists. The colonialists marked India as backward based on the condition of “its” women. Nationalists responded first by improving the condition of “their” women (through education primarily) and then with the refrain that no-one speaks for India’s women except Indian men. Nation, historically, then is a Hindu, male property.

Mr. Modi and his government accept that unequivocally but so does Mr. Kumar. In his speech, Mr. Kumar evoked the male soldier and the male farmer as “real” patriots of the nation. He called for an end to casteism and classicism. He spoke about rampant poverty in his home state of Bihar, one of the poorest states in the country, giving his family’s example (how they live on $50 dollars a month). Women (and feminism) were absent in his speech. The question “why” can only reveal a obvious answer—the idea of nation is still a guiding factor in the discourse around democracy and human rights in the country. A patriarchal idea born of patriarchal wrangling in the 19th century can only forward the rights debate so much and no more. In still clinging to the idea of nation, Kanhaiya Kumar betrays his own enslavement to the tyranny of this concept. This makes his current political posturing suspect. Unless he understands that evoking the idea of nation will always negate the desire for civic engagement in India and that civil society remains unrealized in India precisely because of the idea of nation, his 15 minutes may already be up.

Someone has to access this history just so he/she/they may wrestle to the ground this troubling concept, one that carries within it two dangerous strains—colonialism and nationalism. This is a virus that will need a whole new paradigm of treatment because antibiotics we know only make the virus resistant over time. I know this because Kanhaiya Kumar’s speech is no different, says nothing new, identifies no pathways to a point beyond the nation. He is also evoking a politics, Marxist-Leninism that is as old but without any teeth now. It’s challenge to right-wing Hindu nationalism failed 20 years ago when I was at JNU. The installation of Modi government two years ago is evidence of its failure as a viable counter-point to nationalism. It failed to account for the nation then and continues to do so now. Mr. Kumar and Mr. Modi will both find that their 15 minutes of fame are almost up. The people of India will never find their 15 minutes of fame. The nation will continue its stranglehold on civic and political society for eternity. This is the continuing tragedy of “India.”