To each their own? – The Feminist Wire

Home / Activism / To each their own?

To each their own?

By Guest Contributor on February 2, 2016

When I speak of the discrimination women and the LGBTQI communities face or when I am asked to discuss my doctoral research in feminist and gender studies, I am often met with the seemingly well-intentioned but ultimately eye-roll-inducing phrase: “to each their own.”

I want to roll my eyes not only because it is a cliché but also because it is far from vacuous or inane. It is not merely an expression that (uncreatively) articulates open-mindedness; it functions to depoliticize difference and discrimination, can lead to political inaction, and can actually participate in and build the structures of racism, sexism, homophobia, ableism, interphobia, transphobia. In other words, the seeming liberal center of this adage actually colludes with oppressive structures.

The Latin phrase suum cuique, often translated to “to each their own,” can be traced back to Plato’s Republic (433a-e). Later taken up by Aristotle in the Nicomanchean Ethics and Cicero, the ideological core of suum cuique was distributive justice. The meaning of this phrase, however, has changed over time.

Indeed some politically right-leaning folks or straight pride types argue that the expression is too PC or have coopted the phrase in the attempt to claim they’re really the ones being prevented from living or having “their own,” as this meme illustrates. Typically though, the phrase is meant to demonstrate the speaker’s supposed tolerance for all people and all ways of being, desiring, and doing. When one employs the phrase they mean to suggest that they are admirably tolerant, open-minded, left-leaning, and perhaps even a feminist.

I remain frustrated with expression because it is a misleading discourse of tolerance. What is wrong with this discourse? Tolerance is often assumed to be a good thing. Since the late twentieth century, Wendy Brown notes in Regulating Aversion, tolerance has been imbued with positive connotations and conjures up feel-good, but ultimately problematic, notions of multiculturalism, diversity, and peace.

Brown continues, tolerance ultimately “entails suffering something one would rather not.” When one “tolerates” a person or a group of people one does not affirm and celebrate that person or group, rather one conditionally includes, licenses, or endures the deviant or the unwanted. As a result, the one who tolerates is in a position of power: “tolerance is thus an act of power” disguised as virtue.

Tolerance, as reflected in the phrase “to each their own,” is predicated on authority and does not genuinely seek to resolve groups’ hostility towards differences. Subsequently, those marked as to-be-tolerated (e.g. POC, women, Muslims, Indigenous groups, people with disabilities, LGBTQI individuals, homeless or poor folks) “are invariably marked as undesirable and marginal […] and those called upon to exercise tolerance [usually, for example, white folks, non-trans and non-intersex people, heteros, rich folks, enabled people] are asked to repress or override their hostility or repugnance in the name of civility, peace, or progress.”

When folks say “to each their own” they may not consider themselves exercising any power or authority. They may not even usually be in a position of power or privilege. I assume when people use this ubiquitous adage they genuinely think people should be able to live their lives freely.

Nonetheless, this adage of tolerance does not help folks escape discrimination or violence. I suggest that it leads to inaction because the speaker either maintains that (1) they are not impeding on other folks’ lives or freedoms and therefore need not do anything or (2) they do not recognize the fact that many of people cannot live “their own” lives because of, for example, police brutality, inaccessible spaces or texts, systemic medical genital mutilation, a lack of access to adequate, nondiscriminatory healthcare, unequal pay, or the looming threat of assault or rape. 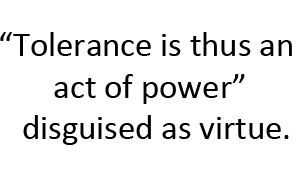 Too many people are not privileged enough to continue living. Indeed, the discourse of tolerance arguably creates a culture that tolerates or renders invisible structural forms of violence like, for example, police brutality.

The idea that tolerance discourses promote inaction can be explained through another phrase that often accompanies “to each their own.” This expression is equally cringe-worthy and smells like colourblindness: “I don’t care if they’re/you’re lesbian/gay/bi/trans/queer/intersex/ poly/disabled/black/Muslim/a woman/etc.”

Again, the underlying sentiment is “I am tolerant. I am not x-ist or y-phobic.” First, claiming oneself not x-ist or y-phobic forecloses on active self-interrogation and assumes that oneself is immune to behaving in oppressive or discriminatory ways or thinking oppressive or discriminatory thoughts. That is, the speaker positions themselves outside of power, culture, and politics. Second, claiming oneself not x-ist or y-phobic implies one need not do anything. They’ve done their part. They’re tolerant. However, as we know, discrimination is not merely a hurled insult or state of mind or belief regarding which group is more or less superior.

Oppression is more insidious. Discrimination is a systemic, structural problem with real material consequences that requires political action and self-interrogation.

The spirit of “I don’t care if they’re/you’re…” allows or enabled inaction and reinforced the idea that discrimination is a personal problem to over come. Put differently, for example, the declaration “I am a non-racist/I am not racist,” is very different from stating “I am anti-racist,” as Marlon James explains in this video. When one claims they are non-racist they are not called to action and, in turn, they are not challenging – rather they contribute to upholding – oppressive systems. Non-racist folks, James illustrates, are “not doing a damn thing.” 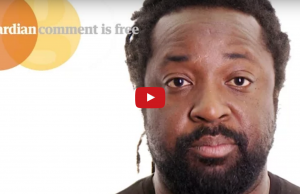 Tolerance discourses depoliticize difference and discrimination and can, as a result, lead to political inaction and complacency. Oppressive structures are not challenged by inaction, a lack of self-interrogation, or by being “non-.” As Wendy Brown argues, tolerance is a discourse of depoliticization, meaning that inequity and discrimination are personalized or even naturalized; injustice and oppression are not conceptualized as political, systemic, problems – problems with power relations – that require political analysis, “anti-,” and structural change.

Perhaps, then, rather than reuse the phrases “to each their own” or “I don’t care if they’re/you’re…” we should ask ourselves, “how am I actively or passively participating in oppression and inequity?” or “how can I enact anti-?” The time has come to move beyond tolerance toward justice. 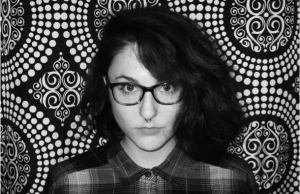