COLLEGE FEMINISMS: Just Because: Colorblindness Is a Real Problem – The Feminist Wire

COLLEGE FEMINISMS: Just Because: Colorblindness Is a Real Problem

**This post is dedicated to all the strong people of the world who persevere every day for justice in the face of mass ignorance, resistance and a fusillade of criticism that the world we imagine is simply a “utopia” that we will never reach. You are critical in the face of widespread passivity. You are brave in the face of conditioned acquiescence. I salute you.**

Sitting in a room filled with university students, who passively accept a status quo that is shoved down their throats, is deeply distressing. I am that person in the class who never stops questioning the mainstream paradigm and traditional liberal way of thinking- who won’t just accept the way things are; this simultaneously drains me and exhilarates me. I call it a state of being “hopelessly inspired.” The pain of being surrounded by pacified individuals is not to be undervalued, especially when you yourself cannot stop questioning why things are the way that they are and why we, as a global society, aren’t doing enough about it.

The truth is, my mind never stops working. I am constantly criticizing and questioning the state of our global affairs. I will not passively accept injustice. I will not stop asking questions that matter. I will not stop trying to conjure up new ways for us to solve our world problems. But, (and this is a massive but) I live in a global society where most people do not care to burden themselves with such worries. It is truly disheartening and depressing to be around people who ask you things like: “Why do you care so much? Don’t take everything so personally!” One of the most difficult tasks in the world is to keep your breath in a world that is actively suffocating you.

So here’s my story about how I got mad in one of my classrooms because of categorically false statements about inequality, institutional racism, white privilege, and discrimination. I have written up a transcript of the discussion and picked out key parts that also represent a wider culture of ignorance and colorblindness. All these statements came directly from students in my class; my responses are verbatim. I want to point out that the blame does not lie with my fellow students, as they are only drops in the ocean; rather, I have used them as a means to express a worldwide problem.

*In a political philosophy seminar about equality*

Person 1: Equality and racism are not related. We don’t need to discuss race if we are discussing equality.

Me: That is very easy for you to say as white, privileged male.

P1: That is very unfair.

Me: Is it fair that you’ve never had to walk down the street and worry about being stopped and frisked on the basis of your skin color. Or fear being denied a job on the basis that your ethnicity. Or deal with a judge who is two times more likely to charge you because you’re black. Yet you sit here and claim that equality and racism have nothing to do with each other?

P1: What’s that got to do with equality?

Person 2: Well I know what racism is. In South Africa there used to be racism against black people and today it is the other way around. Do you know that they have a Black Economic Empowerment (BEE) law that discriminates against white people? I am from South Africa, I know.

Me: Comparing one concentrated incident you had in South Africa is not the same as hundreds of years of oppression that people of color have faced and continue to face. The fact that you receive racist treatment when you are in South Africa because you are white is not the same as facing daily discrimination from a racist system. Racist treatment and systems are two very different things and have completely different outcomes.

P2: It is not fair that you are saying that I do not understand what racism is.

Me: You can never understand what it feels like to be on the receiving end of daily discrimination when you have white privilege and do not suffer the same as people of color.

P2: You know, if the IRA came back to Ireland tomorrow and the police wanted to stop and frisk Irish people on the street to prevent terrorism, I wouldn’t stop them. Even if they were white, I would support it. I’m not racist.

Me: You’re not dealing with the issue at hand, which is institutional racism in this country. I don’t want to talk about hypothetical examples of the IRA. How about we talk about the here and now, what’s actually going on. The daily prejudice that people of color face.  You really think that you can understand that because someone was once racist to you in South Africa and now all your white privilege is wiped out? You don’t understand that a racist system operates on a very different level to actual individuals carrying out their prejudices in their society. Systems have mass outreach and affect more lives and that is the institutional racism here and in the U.S.

*Discussion moves on to positive discrimination*

P1: I don’t think it’s fair that women and people of color are given jobs on the basis of their sex or skin color. We should only give work to those people who have earned their position, have worked hard for it and not just got in because of a quota.

Me: You do understand that those systems are in place precisely because people of color and women have been marginalized for so long that without such affirmative actions, the work force continues to be dominated by white, middle-class, males.

P2: People should work for their positions, not be handed them. I just think that if you work hard enough, you can get where you want. We don’t need quotas for people who don’t deserve them.

Me: Again, that is very easy for you to say as a white privileged male. You don’t have to suffer employer discrimination or worry about being denied a job because you are a single mother with children. Clearly you have no understanding of what people of color and women face and you’re not even willing to listen to how institutional racism affects equality of opportunity.

This entire conversation was a reminder to me about how unaffected and invested in their own privilege people truly are, and if this is coming from students of political science, what hope is there really for our global social development? If you have no qualms with our system representation, it is likely because you are already being represented. But there are many sectors of society who are massively marginalized and under-represented and this warrants recognition. 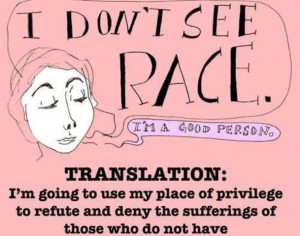 Mass colorblindness is a real problem. It’s that ridiculous Morgan Freeman has argued that ignoring racism will lead for it to go away. Racism doesn’t go away if you ignore it. You are doing more wrong by omitting race out of the conversation of social politics than good. You are ignoring the suffering of millions and causing more pain through colorblindness. The only way to work towards a more equal society (even though I believe that equality itself is an illusion) is through acknowledging our collective wrongdoings and shortcomings. I do not want to exclude those with privilege, I just want them to accept their racial privilege whether it makes them feel uncomfortable or not. You cannot be an ally while you are still colorblind.

People who believe that we all start off on an equal footing and everything that happens to us post-birth is a direct result of our own actions are the problem. People who deny that socio-economic inequalities are a product of our hyper-capitalist society are the problem. We don’t suffer from mass inequalities because people are lazy. Neither do we suffer from them due to individual luck. There is a system in place that not only causes these inequalities, but also perpetuates and exasperates them. Just read oligarchy theory and how a small number of elites agree to a transition to democracy just to maintain their wealth and privilege. Capitalism will always require a docile, underpaid working class that is crushed by the force of our wants (not needs). Racism is not a natural state and we need not accept its existence in our society. I will not pretend that institutional racism does not exist in order to appease and cater to whiteness’ ideals of humanism. My humanism involves addressing everyone’s struggle and not just the ones that relate to me personally. We need more allies, not people who deny the reality of our societies.

You are in an intimate relationship with the rest of humanity and it is your duty to be bothered, to be frustrated, and to get mad. And if you don’t feel anything, you are the problem. Just because you are unaffected by injustice does not mean you should remain mentally, emotionally, and physically unaffected. Privilege is thinking that something is not a problem because it does not affect you personally.

There is nothing wrong with being perpetually sad at the state of the world, as I wrote here. There is too much stigma around sadness. Depressive realism is not a disease; it is an impetus to act. Be sad at all the injustice. Be angry that we are a part of it. Bathe in your anger. Live it. But, do not let it consume you. Channel it into improving the situation. Apply your anger for the betterment of humanity. And be unsatisfied with the state of mass inequalities, institutional racism, greedy capitalist ideals, patriarchy, and white privilege.

I’d rather have dangerous freedom than peaceful slavery any day. 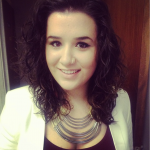 Mohadesa Najumi is the TFW’s special College columnist.  She is a writer, political enthusiast, and intersectional feminist living in London. Her work has been featured in CounterPunch, Green Left Weekly, TOLO news, Comment Middle East, and Participedia. Her research interests include democratic theory, post-representative societies, political power, gender, development, social, resistance, and revolutionary movements, Latin America, and the U.S. Mohadesa is currently completing a dissertation on Bolivarian participatory democracy in Venezuela at the University of Westminster. Mohadesa blogs regularly here.