There was a time when I took pleasure in the great money machine. In its fantasy of freedom. In its tales of self-made men. But maybe that was my problem all along. Self-made women have never been a thing. I’ve learned my proper place now. I’ve been passed between buyer and seller more times than money itself and they will kill me as soon as they discover the skill I still lack. As soon as they discover I’m in debt for the last trick, the last deal, the last time you spun straw into gold, they will kill me.

Don’t distract me. You asked for your name.

Before I met you I worked for a man who was constantly pushing, constantly changing, constantly boasting about what I had to offer. One day it was sing like a bird, the next, dance like the sun dances on a lake. The next it was simply, clean the floor, make it as clean as a shiny new apple. And I did, because it was my job.

Is it Henry or Norbert? Ed? Simpkins?

Don’t ask why I didn’t simply leave. I could site economy, I could site cultural brainwashing and a deep-rooted need to serve, or I could make up an elaborate tale involving trickery, a bet and an evil father. But I won’t. I shall say simply that I didn’t leave. Had I done so neither of us would be here now, so let us leave it at that.

Once, just as I was finishing off a day of standing as still as a statue, a new task was thrown my way. I would have said no, work hours are done, but the stakes were too high for me to refuse. My boss went all out on this one. “She can spin straw into gold” he said to a king who happened to be passing. I say king, but his response showed him for what he really is – a tyrant. “Very well. She will come with me. She shall have one night to spin three bales of hay into gold. In the morning, if it isn’t done she will die. If it is, she will go free.” As I said, the stakes really were too high for me to say no. 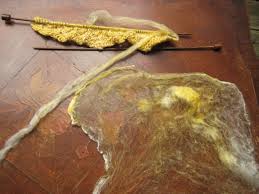 So, there I was, sitting on one of the bales of hay, locked in a barn and about to give up entirely. Even I was questioning why I stayed in my job by this point. When I first got the job in the mill I thought it would just involve milling; simple enough. Instead I found myself subject to the whim of a very silly miller. He made me do all sorts of stupid stunts and never let me mill. I’m too pretty to mill he said, so instead he got me to mop the floor, dance like the sun and stand like a statue. Division of the labour force certainly takes some odd turns at times.

It’s just the baby. Shut up and listen to my story. Do you want the full story or not?

Miller’s Assistant wasn’t my first job; it was my ninth. Before that I worked in bean cultivation, drying and preparing beans to go in little bags, as a stand in princess, which really did just involve standing, and porridge taster for some bears until I was fired. I worked for the old shoe lady – pretty much just baby-sitting, as a shoe carrier for a prince, a cobbler to a cat, and then cobbler to twelve sisters, which finally saw out my foot phase. After that lot, I couldn’t face another worn sole. And my last before milling, I kept look-out on a cottage with three little pigs squatting in it, that was the easiest and probably the dullest job of the lot. The pigs never came out and though my boss kept making threats of eviction, he never saw any through. I left before the wind really got into his sails. I got my dream job, milling. Or so I thought.

Where do you think you’re going? Leave it alone. John, James, Jake, Jack, Jacob, Johnson, Jericho, Jeremy? Jeremy’s a nice name. Occasionally, the mill wasn’t so bad. Obviously not when I was dancing like sunlight for eight hour stretches, but there was one day when the miller wanted me to cook like an angel. So I made an apple pie. Of course it was all preferable to perching on a bale of hay wondering how the king would kill me. And that’s how I met you.

I had given up when up you popped, dancing and singing and asking for something I valued. The last time I burnt myself on his porridge the old bear gave me a necklace, so I gave you that. I screamed so loud the bear said “it’s just too bad that you have to daily go through this ordeal”, so he a gave me a necklace and fired me. I had hard graft to make rent that month, particularly since the necklace was value-less. Still, it showed its worth in the end when you took it. The old economy trickery? I understand. If you’re willing to pay a night’s labour spinning hay into gold for a necklace then it must be valuable. What did you do with it anyway? Has it lost net worth since then?

Are you sure you don’t want to change your name to Jeremy? I can’t think of any that would suit you better. With a name like Jeremy you could do anything. You could be a clerk or a minister or maybe even a judge. You wouldn’t have to be involved in underhand games like this one. Have you never thought that it might be your name that’s keeping you down? Don’t look at the baby. I’ve still got 377 guesses. Do you want the full story or not?

You spun the straw and next day I was out. I was on my way back to the mill. I might make silly job choices but I don’t work for tyrants – I scarpered pretty quickly you mark my words. But as I walked quickly away from the castle I heard the sound of people chasing me. I tried to go faster but it was no good, money always wins.

They hauled me back and told me I wasn’t done. Another room. Another night. Another set of bales of hay. You’d think the first pile would do but I suppose the reason rich people get so rich is that they just don’t know when enough is enough. I’ve never been rich enough to lose perspective and who am I to say that if I did I’d be the one rich person not searching for another pot of gold, or in this case, bale of gold.

So there I was once again, this time perched on a rather larger pile of hay and wondering how the king would kill me in the morning. – If you’re thinking there’s a monotony to this story then I will warn you now, these things always happen in threes. – You turned up, same deal again, something valuable. I wore a ring that had the power to make you turn three huge piles of hay into gold. I call that valuable. I gave you it. – Actually I found the ring in one of the sisters’ shoes, couldn’t sell it so I wore it. – You did the business. Magic. Economics. Deal! Golden hay.

Is it an animally name like Spike, Dotty or Rover? Is that why you look sad? I suppose it would be difficult to get on in life if somebody gave you the name of a mindless beast. Don’t look at the baby. 374.

Of course the next morning the same happened again. The king came in, liked the gold, and let me go. This time I managed to get all the way back to the mill before he rethought this stupidity and sent guards to return his gold mine to him. I was in the middle of making some rather exceptional frog noises as per my boss’ latest whim when they stormed in, grabbed me and dragged me back to the castle. King: 2; Miller’s Assistant: 0. But this time I was determined to get the upper hand. I told him straight out: “King, this is it, one last time and then you have to promise to let me go. Enough gold is enough, even for you.” Whilst he fundamentally disagreed with this, I could see I had him. “Very well” he said, “this time there will be three giant bales of hay. If you can’t spin them into gold I will kill you; if you succeed I’ll marry you.” Slavery or death then, that was the deal. Not the best I’ve ever made, but I considered it was better than spending all my nights perched on ever larger bales of hay, trading with a dancing fool, no offence.

Is it Emily? Because I wouldn’t recommend it. Edward? Didn’t think so. Ernie? Ernie’s a solid name, an honest name. Probably wouldn’t suit you though. 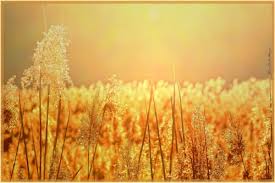 So there we were. Back again. Again. I was perched on top of a giant bale of hay wondering how the king would kill me and more troubled still by the thought of how he’d marry me, when up you popped. Unfortunately, I had nothing left to trade. Only my clothes and I needed them for warmth, particularly after the spinning. Gold is a cold companion. And then you suggested it, my first baby – not what my body had on it but in it. I considered that a pretty fair trade. After all, you were making gold, I would make a baby. Fair. Magic. I went for it.

Next day the king came in, was pleased, and to ensure his gold mine couldn’t ever run away again, he married me. In many ways my marriage to King is just like any other job, subject to the whims of my betters. He’s not like you. I like you. You’re not my better, although I can’t be sure you’re my equal either, not until I tell you your name. If you have one at all.

I’ve looked after babies before, this one is much the same. Only this one is more valuable, you gave it that. I’m not sure what King will say when he finds his baby gone. Maybe he won’t notice. Babies aren’t worth as much as golden hay in his head, only yours. He wants more gold. It was only a matter of time. He’s said nothing about more babies. I suppose I knew. I knew the first night sitting on a bale of hay it would end this way. I knew the first night I met you. I knew the first night I wondered how the king would kill me. I knew even before then that one day the greed of a man who bought me would crush the life from me. You see you can’t trick the money machine. Not really. Not for long. 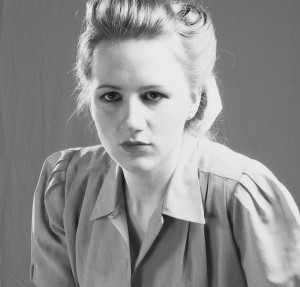 Laura Witz is a UK-based writer who has worked as a writer, director and theatre producer for the last seven years. She is currently working on a collection of short stories based on fairy tales. The main focus in all her writing and performance is on giving a strong focus to an often forgotten female narrative. Her previous work involves writing and adapting plays for performance: scripts have performed at the Edinburgh Festival Fringe and Jane Austen Festival in Bath as well as in a number of other local theatres in the UK. Her 2013 script, Goblin’s Story, which developed a story around characters from Christina Rossetti’s Goblin Market, was awarded the Edinburgh49 Prize for Distinctive and Memorable Theatre.