Arts & Culture: “For the Semanticists” – The Feminist Wire

Arts & Culture: “For the Semanticists”

se·man·ti·cist
noun
a specialist in the study of linguistics and logic concerned with meaning.

1. making a semantic suggestion on an article or post written with the sole purpose of criticizing the act of white people debating semantics while black people die,

the deliberate killing of a large group of people, especially those of a particular ethnic group or nation.

3. gaslighting with pop media catchphrases instead of doing the work of researching factual data and/or actually listening to the lived experience of black people,

ter·ror·ist
noun
a person who uses violence and intimidation in pursuit of political aims.

adjective
of or relating to the government or the public affairs of a country.

5. debating the use of “shooting” over “massacre” while black people are being massacred,

a deliberate and violent slaughter of a large number of people.

6. arguing the use of “loner” over “terrorist” while black people are being terrorized,

lon·er
noun
a person who prefers not to associate with others.

7. talking circles around how to talk (be kind, no need for attitude, calm down, that hurt my feelings, you’ll catch more flies with honey, stop yelling, I won’t get behind your cause if you attack me, don’t attack me, I’m being attacked here, I’ll unfriend you, I’ll block you, I’m done, I’m out, how rude) instead of [shh] actively listening,

soft
adjective
having a pleasing quality involving a subtle effect rather than sharp definition.

8. pondering the “motive” of a “soft-spoken” “loner” who made a few “jokes” while black people were, in fact, massacred by a domestic terrorist,

mo·tive
noun
a reason for doing something, especially one that is hidden or not obvious.

9. minimizing the actions of terrorists mired in the ideology of white supremacy who espouse racist hate and exact such hatred in murder,

shoot·ing
noun
the action or practice of shooting, as with a gun.

10. defending the actions of state-sanctioned terrorists mired in the ideology of white supremacy who espouse racist hate and exact such hatred in extrajudicial killings (aka, murder),

13. squabbling over nouns and verbs while Black people are dying and trying not to die and playing dead so they don’t die and videoing themselves so that if they do die the truth won’t die with them,

rac·ism
noun
racial prejudice plus power on the structural, institutional, and cultural level. 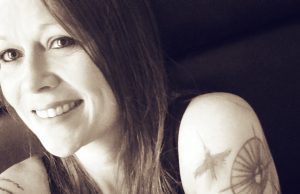 Jeanann Verlee is author of Said the Manic to the Muse and award-winning Racing Hummingbirds. She has earned the Third Coast Poetry Prize and the Sandy Crimmins National Prize for Poetry, and her work appears in failbetter, Adroit, Feministing, and BuzzFeed Reader, among others. She has worked as poetry editor for Union Station Magazine, For Some Time Now, and Winter Tangerine Review: Fragments of Persephone. Verlee is a curator, coach, and veteran of poetry slam who has performed and facilitated workshops at schools, theatres, libraries, bookstores, and dive bars across North America. She wears polka dots and kisses Rottweilers. She believes in you. Find her at jeanannverlee.com.