By Guest Contributor on November 2, 2016

Lisette don’t like to work. Mostly, she paint mandalas on tiles and have exhibition four times a year to sell her art to Laguna Beach goras. That’s her job, she tell me often, which is okay, I don’t mind her constant job speech (as if none of us had to do real work to survive in California) except that we have a Diwali party at our house tonight, and everyone want to taste the younger daughter-in-law’s cooking. She couldn’t make samosas even if someone placed a gun over her head, she told me more than once in the past, shamelessly.

“Let’s do a take out, Maman. That ways, ladies can relax with the guests, just like the boys,” she say today, surprise surprise. Then she rub my shoulder as if I’m a baby mourning a lost toy. “My treat.”

I exhale loud. Why don’t this woman get it? We’re not living island life here. I want to tell her, but I stop myself. Not her fault if her parents never teach her to work. They still “work” as theater artists in Seychelles; her Gujarati grandfather there made enough money from his business, supplying Indian clothes to Kenya, South Africa, Nigeria, Mauritius, Zanzibar. Her mother is French from Reunion so Lisette don’t have strong Indian values like we do. What she do have is a fine skinny butt!

“Rude to serve guests outside food,” I say.

“If the food is good, no one’s going to care.” She say, fidgeting with a bonsai on the kitchen table. “Trust me.” She pluck out a few leaves attentively. She’s like that, Lisette. A little tinkering here with bonsai leaves, a little tinkering with color combination and curtains in the hall there, and life is good. She got no idea what the real world is like. Believe all world to be one big art show.

“It’s about Indian culture and hospitality,” I say, mixing chickpea flour with red chili powder, cumin seeds and dice onions. “We’re not goras here serving pizza and coke and calling it a party.”

“Then the boys should help us in the kitchen too?” Her chin point toward the couch in the hall where they watching Laker game: my retired husband and my two sons – Ram and Hari.

“Ram and Hari work all week. They deserve a break.”

“We’ve worked all week too and deserve a break, right Di?” She look at Dipal, my older daughter-in-law, but Dipal wave her hand backward, putting another tray of samosas in the oven. “Keep me out of this, you two,” she say.

“Hari operate for hours, bending over a patient’s body. Think about his back, that poor boy.” Hari and Lisette married for two years now, but it’s like, I’ve to always remind her that her husband is a surgeon. She don’t get it. “And then, you know,” I say, kneading the spiced dough with my fist. “Man has the family’s greater financial burden.”

“But zero social burden. My family is continents away.” Snap come her response. Slow with her hands, fast with her tongue, Lisette. “He doesn’t have to go to any of my family socials,” she say.

Everything with this woman is about dividing things fifty-fifty, as if their marriage was a bonsai whose branches and leaves she could trim into perfect shape.

“Being a junior artist isn’t easy either, Maman.” Lisette push the bonsai to the edge of the kitchen table and fake a cough, just when Hari walk into the kitchen. He pick up cashews from the dry fruit bowl on the sideboard where I’m shaping dough balls for onion bhajias. He move toward Lisette and pat her shoulder gently.

“Why not some homemade food and some take-out? Everyone happy?” He turn to Dipal who’s pressing a knife against the samosas, testing the crispness of their crust.

“Sure.” Dipal raise her palm as if she couldn’t be bothered further.

“Case rested, ladies. I’ll set up the patio.” Hari go out, start rearranging the patio table and chairs to make space, thrash the empty grocery bags, the newspaper and old magazines, gather empty coffee cups, snack plates and bowls, and place them on the big serving tray lying empty on the table. Lisette follow him outside, as if waiting for an excuse to leave the kitchen. She’s carrying an overgrown money plant to our backyard where she will perfect its look while my boy will carry the unused utensils to the sink, while Dipal and I will fry onion bhajias, I know from experience.

Hari come inside, place the cups and bowls in the dishwasher, then hug me from behind and whisper in my ear. “I’ll call Tandoor India, Ma.” He pick up more cashews from the dry fruit bowl.

You see, that’s the problem. Lisette cast a spell on my Hari and when I turn around, I see his eyes fixed on her butt in those skinny jeans, and I know how. Lisette is humming some Creole song; I’ve heard that tune from her before. I mean, who cares how long branches of the bonsai, money plant, rose plant or the bougainvillea have grown. Nature is supposed to be wild! And there’s more to life than making things pretty. Relationships, caring, nurturing others, there’s a different kind of pleasure in that. These are the things I want to tell her. But last time I try, Hari leave office early, come to our place and lecture me for two hours, teaching me fancy words like sexy-sum and gender-rolls. Kids these days, just because they have education, they have money, they have love marriage, they think they have all. Not worth telling them anything. So I close my eyes, my ears, my mouth, and go place dough balls for bhajias next to Dipal who’ll fry them.

Hari stroll out of kitchen, his palm stuffed.

“Nah.” He say and drop into the hall couch, dialing numbers on his phone.

The dryer next to the washer in the pantry beep before shutting off. I remove all clothes, shove them in a huge wicker basket and take them out in the patio. If she cannot cook, at least she can help fold clothes. But Lisette pretend to not notice me. She now arranging my garden roses in a vase! I dump the clothes on the table and start folding them one by one. She continue humming the Creole song. Then, out of blue, she raise her chin, make quick sniffing sounds and mutter something in Creole, or maybe it’s French, who knows.

“Coconut!” She squeal. “What’s Di making?” Coconut is her favorite fruit, and it show in the glow on her wrinkle-free face, complexion smooth like chocolate mousse. Complexion of someone who had too easy in life.

I raise a pair of pants to her nose. “Samosas, mini-dosas, guacamole, tofu, chicken mix for tacos, macaroons, and chocolate-coconut cake,” I say. Instead of offering help, she run on the spot like a three-year-old, fix the rose vase quickly, and dart into the kitchen, as if warming up for a new game.

I jerk down a cotton shirt to release wrinkles and watch my two daughters-in-law in the kitchen ahead. And Ram kasam, what a scene. Dipal is holding the chocolate-coconut cake over a tray in her mitten hands, and Lisette is telling her something, nodding forward, sideward, then forward. The two laugh then Dipal give Lisette the cone filled with vanilla icing.

And there, while my beautiful Dipal start cleaning cilantro (she make a killer green chutney) while frying onion bhajias on the side, Lisette carry the tray to the kitchen table, sit down, cross her legs in yoga position, bring the table closer to her chest to adjust their mutual height, and start drawing imaginary lines with her fingers over the cake. Her tongue jut out slightly, and her huge brown eyes narrow in the concentration of a yogi. She raise the icing cone to the center of the cake, and she begin.

That’s when Hari walk into the kitchen again, peek inside the pantry and grab a beer. When he step out, his head jolt back, as if he can’t believe the scene too. Both my daughters-in-law hanging out in my kitchen and both helping make Diwali dinner. How often I imagine and narrate this scene to my Harshu, when he stay bachelor for some thirty-five years, one girlfriend after another, never getting married. And as we watch Lisette lost in the play of a sketching a dense arabesque on the cake, Hari move toward her with quiet, deliberate steps, a sparkle in his eyes, a finger on his mouth, signaling me to stay quiet. But I shake my head sideway, lip-syncing repeatedly, No, No. He must not change the scene. 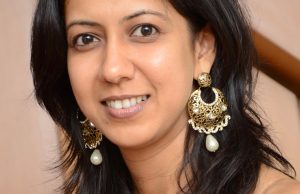 Namrata Poddar holds a Ph.D. in French from the University of Pennsylvania, Andrew W. Mellon Postdoctoral Fellowship in Transnational Cultures from the University of California, Los Angeles, and MFA in Fiction from Bennington College. Her critical essays, book reviews, short fiction and translation have appeared in several journals, including Research in African Literatures, International Journal of Francophone Studies, Dalhousie French Studies, Cultures Sud, Jaggery, Literary Orphans, Necessary Fiction, The Margins, Transition and Literary Hub. Her story “Excursion” was awarded the first prize at the contest organized by 14th international short story conference 2016, held in Shanghai, judged by Bharati Mukherjee and Clark Blaise. She is working on her first fiction manuscript and translating writers of Francophone Afro-Asian diaspora into English. She teaches contemporary American and transnational fiction at UCLA. www.namratapoddar.com