The day that Louise died, Antwerp felt he was going blind.  He was weeping and could not stop his weeping.  He’d been the one to find her in the morning, in the study, slumped onto the floor, having fallen from her chair, her red hair over her like something spilled.  When he saw her prone form, he knew.  It was this heaviness, this deadness of weight that he could not stomach.  When he touched her, she was heavy, her arm as empty of life as though no life had ever been there, and Antwerp felt inside his own chest, the difference between Louise and not-Louise, and when Doctor Porchiat entered and crossed the room, falling to his own knees, trying to bring breath back into her, though they, doctors, could tell she was dead, stiffening, and they took her into the laboratory and Antwerp would not leave her and Dr Porchiat sent for her family and even when her parents and oldest sister crowded into the room, weeping, and Louise’s mother gave Doctor Porchiat an envelope, and her sister and mother anointed the body, they could not get Antwerp to leave the frame of the door, he did not ask why they don’t take her body as custom decrees, because he felt it should stay with him, and he didn’t see the mother speak with Doctor Porchiat, who stood in the corner reading a letter with a grave face, and Antwerp felt Louise’s father’s heavy hand on his shoulder and Antwerp felt an enormous wall rise inside himself and he slammed into it again and again, senseless with the not-Louisenss, saying, she is dead.  Great worms of sorrow whipped inside of him.  He had failed her.

The day passed like this and he was never away from her body, now pristine and foreign under a sheet, but it was her, not-her, and he heard a noise coming from his body he did not understand, and then Doctor Porchiat gave him a shot in the arm and Antwerp felt himself falling away, looking up into Doctor Porchiat’s brown eyes, and nothingness like sleep came to him.

When he awakened he was ravaged by the knowing, Louise and not-Louise, and he stumbled through the dark rooms, not even remembering to light the rooms, and the tears began again as if they had not stopped.  Doctor Porchiat’s light shone under the door to the laboratory, and Antwerp opened the door and there was Doctor Porchiat, with sponge in one hand and knife in the other, and Louise, slit neatly down the center of her breastbone, Doctor Porchiat, concentrating, dabbed neatly at fluids and without seeing Antwerp, set down the sponge to reach for another,  longer knife, with which he would again cut Louise, not-Louise, the smell of lamb thick in the room, and Antwerp screamed and lunged, and Doctor Porchiat, startled but strangely calm, not as if he’d been doing something wrong, which he was he was he was, and Antwerp hurled the tray of tools. Doctor Porchiat was shouting, “Sheaskedmeto, youmustunderstand, sheaskedmeto,” the doctor’s arms pulled at Antwerp saying, “She,” and Antwerp tried to bring the halves of Louise together with his hands, which kept slipping into her dead chest, the organs bulging with their greenish lace, and he was still screaming, and not-Louise’s blood was all over him.  He ran to the door, flung it open and ran out, screaming, Monster!  Shutters began to open all over the square, and tops of heads appeared in windows, and Antwerp, blind, spewed the words from his mouth.  In rage he pointed a bloodied finger toward Doctor Porchiat’s door which was already shut against him, where not-Louise was lying, cracked open to the light.  He was surrounded by villagers and already he knew what he’d done, but he could not stop and he pointed, shouting, grave robber!  and they left him standing him there, running to pound on Doctor Porchiat’s black door, someone smashing the glass of the window, and they dragged the tall, familiar figure out towards the blacksmith’s kettle of pitch, which steamed as though they’d readied it just for this, and Doctor Porchiat was long-limb tied and speaking in a fast low voice, and suddenly Antwerp understood what he’d unleashed, as a mattress of feathers was brought out to the square, knifed open with a violent ripping sound, the mob shouted, all angers awakened and the villagers caught in a blood fury that Antwerp knew had nothing to do with Doctor Porchiat’s careful medicine, and he wanted them to stop, he shouted against their fury, NO, and the tears came again and the villagers turned on him, too, locking him away in the blacksmith’s horse stable where it was dark and reeked of piss.  He could hear the sound of Doctor Porchiat’s shouts of pain, and Antwerp screeched until at last, the vastness of his new aloneness overtook him and he fell to the filthy floor. 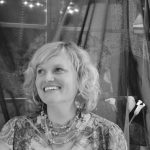 Elizabeth Frankie Rollins has a collection of short fiction, The Sin Eater & Other Stories (Queen’s Ferry Press, 2013). She has also published work in Fairy Tale Review, Sonora Review, Conjunctions, and The New England Review, among others. Rollins has received a Pushcart Prize Special Mention, and won a Prose Fellowship from the New Jersey Arts Council. She teaches fiction and composition writing at Pima Community College in Tucson, AZ.  She lives in a sculpture garden.

Related ItemsallegoryCultureFictionPolitics
← Previous Story “Imperatives for Carrying on in the Aftermath ” by Natasha Trethewey
Next Story → Poetry by Kenji C. Liu