The Things I Knew – The Feminist Wire

Home / Family / The Things I Knew

The Things I Knew

I always knew my body was a battleground. I’d been fighting with it for years – exercising until I could barely stand up, making myself throw up, and touching myself in shame. But I was a devout Catholic then, praying to a God I was sure existed and who would take good care of me, as long as I toed the line. I felt a fuzzy, warm sense of pride when my mother plastered the “Abortion stops a beating heart” bumper sticker on the back of our family van; this, I knew, was bravery. These were the things I knew.

I hated abortion. I knew Planned Parenthood was a death factory, blood on the walls, with cackling, sadistic doctors who gleefully murdered innocent babies. What I did not know, at the time, was exactly how a person became pregnant and what precisely happened when people had sex. But babies were blessings, and Planned Parenthood was evil and wanted to destroy those little baby blessings. I mourned for those helpless little humans, and I was furious at the irresponsible whores who killed them only for the sake of convenience.

After leaving home, I gently eased away from the things I knew. I became one of those girls who confidently proclaims, “I guess I’m pro-choice, but I would never have an abortion. I could never do it.” How generous of me, right? I lined my eyes dark black, applied deep red lipstick to hide my fear, my virginity, and my unacceptable inexperience. I’d still never been in the position of worrying about pregnancy. And I wanted sex, badly. But I was never really clear on how to get it. I was terrified by my body and by the bodies I lusted after. But I could never let on, never reveal the things I didn’t know. Then I started having sex.

Disney movies and weekly Catholic mass showed me the path to happiness: have a man, keep a man, and please a man. Love was the thing I craved most, and sex came in a close second. In a surprising turn of events, I discovered that sex was fun and felt really good. I liked touching and being touched. I wanted more. Then it hit me: I could get pregnant anytime. Thanks to my once-beloved Catholicism and the complete absence of sex education in my conservative (Catholic and public) schools, I had next to no idea how to avoid pregnancy. But I knew I wanted to keep having sex; I liked it. A lot. Not only that, I knew it was the (best?) way to get men to pay attention to me. Relating to people was so scary and terrible in the light of day, but a few drinks under the cover of night and, presto! I could attract men, and isn’t that what we women are supposed to do? Was I wrong? This is what I knew, what I had been told – get yourself a man. And I was trying my hardest.

Sadly, or maybe predictably, the men with whom I spent my time could not be bothered to worry about my body, unless they were in the process of penetrating it. This was not the Disney fantasy I’d envisioned for myself. As far as baby-making went, I was on my own. The ground started shifting under my feet. I thought about actually being forced to have a baby. With little knowledge about basic biology and zero confidence in my own self-worth, what was the only thing getting in the way of me and unintended conception? You guessed it – Planned Parenthood. Suddenly, with no one to turn to, no parents to lend advice, and no way to support myself, much less a baby, I headed timidly to my downtown Planned Parenthood. As I sat in the waiting room, looking around at the remarkably clean walls (not a blood splatter on them!), and filled out my intake form at the request of the kind woman at the front desk, I wondered about all the hateful lies I’d been told about this place I now needed so badly.

Then I started wondering: why do the critics care? I was twenty years old, attending college while still mooching off my parents, living out the legacy of a family of alcoholics by not knowing my limits, and drinking to cover up my insecurities and raging anxieties. Why would anyone want me to have a baby? What good could possibly come of it?

People who hate Planned Parenthood and abortion would probably have all kinds of answers for me: babies are blessings, they change your life for the better, you never know until you try, everything will be okay in the end, trust God’s plan, and so on and so on. And who knows how my life would be had one of those sad, drunk, hipster musician boys impregnated me so many years ago. Now I’m a Ph.D. student in Gender and Women’s Studies, about to start working on my dissertation. I have my sights set on pushing back against the forces that (still!) make my body into a battleground.

For three years, I worked at Planned Parenthood in Michigan and helped women get abortions. Every day, I drove into work with protestors stepping in front of my car and hurling insults at our patients and me. Some days, I was scared to go to work. All kinds of women – black and white, cis and trans, fat and thin, young and old(er) – came in and out of my life; they came to us when no one else would help them. Some wailed in anger and self-flagellation, others thanked and hugged us for our services. Still others sat like stones while I performed their ultrasounds and went through the (medically unnecessary) mandated informing process. Some of them, not unlike me when I was younger, hated abortion, hated themselves for being there, and hated me for doing my job. But many more were content, if not happy, with their decision, and wondered why all of this was so contentious. A few were convinced that abortion was murder, a grisly process that would dramatically endanger them and their future pregnancies. When I told them that having an abortion was generally safer than having a baby, they gawked at me. I saw the women who were ecstatic not to be pregnant, and the women who thought abortion should just be available for them and no one else – the ones who cried and screamed and threw things at us, called us names, and the ones who gave their last few dollars in donations – I was there for all of them. We all were.

During my time at Planned Parenthood, my family never asked me about my work, and my dad told me I would have to “deal with the consequences” of working there – I’m still not sure if he meant eternal damnation or just his personal anger at my choices. Whatever the case, I do know that he will never know what it feels like to be a girl or woman who is unsure of who she wants to be, who wants to be her best self, who wants to live freely and happily. He will never know what it feels like to fight with one’s body the way I fight with mine; he will never feel contempt for his body the way I do for mine. He will never know how it feels to watch men like him discuss what happens to my future, to be completely dependent on their whims and careless opinions that lead to dangerous legislation. In the end, I just wish people like him would listen to what we have to say. 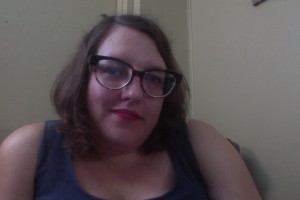 MaryAnn Kozlowski is a graduate student at the University of Kentucky, but tries not to let that define her. She loves dogs, drums, and books. She considers herself an activist and a scholar, but most hates being social.