An Apology for All Occasions – The Feminist Wire

Home / Activism / An Apology for All Occasions

An Apology for All Occasions

By Guest Contributor on November 9, 2015

Those of us paying attention are familiar with this scene: a high profile event, a spectacular disruption, and a resultant public discussion of the efficacy of such a disruption. We’ve recently seen #BlackLivesMatter take credit for staging critical interruptions at a Bernie Sanders campaign stop in Seattle and a Town Hall in the West Adams neighborhood of Los Angeles. This last event, which occurred October 19 at Holman United Methodist Church, was advertised as an opportunity for LA mayor Eric Garcetti to repair his relationship with South Central neighborhoods. By the close of the evening, he appeared no closer to that end as he was hurried away from the church by security and a follow-up event was cancelled.

#BlackLivesMatter (BLM-LA) used this occasion at Holman to expose the inadequacies of the mayor who had promised, amongst other things, to work with them in order to schedule a substantive conversation. In addition to turning their backs to the mayor as he spoke, members of the group—which was estimated at fifty to seventy-five participants—were accused of stepping on pews, confronting church staff, and swearing in the sanctuary. In the aftermath, Holman senior pastor Rev. Kelvin Sauls quickly gathered a group of like-minded clergy and community members who, with the rapt attention of local media, requested an apology from the organization.

The events of that night, while documented in photos and video, are not entirely clear. Even murkier, however, are the ethics that guide arguments by BLM-LA critics for decency and respect. Taking to Facebook to air his grievances, Rev. Sauls claimed to have been “cussed at” by BLM-LA participants and called their trespasses “verbal violence” and “weapon[s] of mass distraction.” His call for decorum relies on the politics of respectability that scholars like Harvard historian Evelyn Brooks Higginbotham and activist-theorist Ella Baker have outlined and measured as a deeply flawed political method. Recent Twitter hashtags like #iftheygunnedmedown, which juxtaposed photos of young Black people relaxed or at play alongside the same subjects in uniform, at their graduations, or at work, expose the ways in which respectability is an impossible goal for Black bodies, even if desirable. Most Black folks know, empirically, that pulling up our pants, speaking with “proper” English, and generally obeying the customs of our social and political order do not protect us.

The religious leaders’ demand for an apology, however, is influenced as much by the space of the BLM-LA demonstration as it is by the genealogy of respectability. The sacrosanct nature of the church is often argued as above the fray of politics—a position as dangerous as it is erroneous and ahistorical—and does not take into consideration the many ways in which people experience the church, from the profane to the prophetic. Holman United Methodist Church is iconic in South Central LA, hosting a number of visitors and occasions for parishioners and guests alike. I have attended events there, including concert fundraisers for the Southern Christian Leadership Conference and a speaking engagement by the Nation of Islam leader Minister Louis Farrakhan. Presided over by host Rev. Sauls, this last event, titled “Justice or Else,” was meant to raise awareness and draw volunteers and participants for the twentieth anniversary Million Man March. Minister Farakhan’s speech at Holman did not begin there, however. The lengthy opening instead took aim at women’s choice of clothing, articulating in no uncertain terms the ways in which we were failing the community. Drawing heavily from the respectability politics playbook while catering to his older audience, he shamed us, arguing that short dresses were a distraction that confused the minds of otherwise righteous men. Women in revealing clothing are, according to the Minister, an enemy to the community’s collective progress. After sitting in quiet defiance for more than thirty minutes, I made my way through the standing room only sanctuary, swiftly and deliberately finding my exit.

This disrespectful, enraging experience revealed itself to me again after I heard the news of the failed Town Hall. The two events mark a striking juxtaposition. To hear Rev. Sauls and his colleagues tell it, the BLM-LA protest at Holman was an affront; their sense of dignity and, as they suggested, safety was compromised that evening. I wasn’t in the sanctuary on October 19 but I was present on the morning of June 17, when the highly publicized and lauded guest of the church debased and pathologized Black women. I too experienced “verbal violence” in the Holman sanctuary and it was not because the speaker was uninvited. It was not because the speaker yelled. It was because the people that I expected and needed to protect and affirm me failed to do so.

I’d imagine that this too was the feeling of the BLM-LA members who dared enter that space to which they were not invited. According to most accounts, the problems at Holman were not about divergences of belief but about strategy—what is appropriate where and at what time. This is a real question and one that must be engaged. I do not believe that all strategies work in all spaces or at all times. Nor do I believe that all speakers warrant a hearing. That the Minister was welcomed to and left Holman without public comment—let alone rebuke—but the BLM-LA members did not suggests the need for more critical appraisals of power within communities of struggle. The political and cultural choices that we make have real, material consequences. I respectfully disagree with some of the BLM-LA tactics but I also know that their actions on the 19th cannot be divorced from what that environment and that moment produced for them.

If we are to create the circumstances for our better world, we have to wrestle with and take responsibility for the ways in which we are complicated and contradictory. We have to move beyond recognition (by media, funders, the state, etc.) as a strategy for individual and collective gain. We have to be patient with our communities and, sometimes, we have to be apologetic. In recognition of the violation faced by Black women at Holman on June 17, perhaps Rev. Sauls would consider offering an apology. It won’t be justice, but it may be just enough to ease my righteous mind. 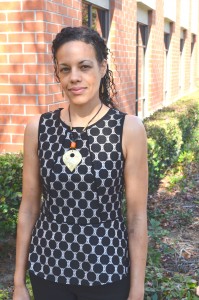 Shana L. Redmond is the author of Anthem: Social Movements and the Sound of Solidarity in the African Diaspora (NYU Press, 2014) and was the inaugural Ella Baker Visiting Associate Professor of Black Studies at the University of California, Santa Barbara (2014-2015). She teaches in Los Angeles.