My childhood was spent speaking tiếng Việt at home and English at school. And as a member of a racial minority in a country consumed by whiteness, my fluency in the two languages came with lessons in code switching.

I learned that in familial settings, tiếng Việt was preferred and held in higher regard. Jokes were funnier, and we laughed with comfort because whiteness wasn’t invited in on the joke. Among Vietnamese friends, our language was a collective secret—something that white friends literally could not comprehend. But in predominately white circles, I wielded tiếng Việt as a facet of the exoticism projected upon me. I learned how to perform exoticism when I wanted to garner white approval. This was all in an effort to be able to assimilate while maintaining some semblance of my heritage.

Over time, as I grew into a body that America would not love, I gradually rejected Vietnamese from my throat. I began using English as a weapon against my parents, knowing they couldn’t understand its foreign sounds. I would fashion insults out of large words and feel a false power over them by aligning myself with white America.

English was my window into respectability, civility, and most importantly, normalcy. While tiếng Việt was initially the spine of my cultural identity, it hindered my desire to reconcile my brown-skinned body with the stark white background that enveloped me.

College was a prospect that I knew would bring me closer to a white ideal. So I moved 3,000 miles from California to New York, placing a whole continent between my parents and me. I moved my body across thousands of miles as if physical distance from my family—a reminder of my heritage and my alienation—could get me closer to whiteness. And while it was true that I was surrounded by more white people, I was also surrounded by more white supremacy.

Last May, I finished my second year of college. Over the last two years, I have been forced to confront the violence of whiteness, something I had learned to value. Everything I had been taught about the beauty, respectability, and generosity of whiteness was proven wrong.

One of the most pivotal moments of my experience happened in a meeting with a white male professor—one of the dominant representatives of academic violence. We were discussing an essay I wrote, and I was apologizing to him for being “unable to articulate.” He stopped me and said that there was no doubt I could articulate; the problem was that I was letting my audience determine my words. I was so focused on being academically impressive, so focused on adhering to white, middle-class norms that I had forgotten to contextualize my voice.

Education is an alias that allows violence to hide under the illusion of public service and personal development. Historically, education is part of the imperialist enterprise. The effect of education through colonization does not just result in the reaping of material goods and destruction of colonized bodies; it is in the best interest of colonizers to also destroy the language through which we come to understand ourselves. Colonization leaves us without the tools to imagine ourselves with complexity and possibility.

In Vietnam, the French imposed an education system that declared French as the dominant language. On the opposite hemisphere, U.S. boarding schools built for Native Americans were places where white settler-educators were sexual predators. And in public schools today, Black and Latino youth are subject to disciplinary policies that consider them disposable, and make them vulnerable to the school-to-prison pipeline.

Institutions of “higher education” are not safe spaces. Marginalized students along lines of race, gender identity, and sexuality face both material and discursive violence.

And while some students may be encouraged to delve into radical literature, the institution that delivers such content remains oppressive. What a paradox to be reading Native American literature and studying indigenous genocide while your university sits on Native land and funds the genocide of Palestinians abroad. There are colleges all over the world built on indigenous land, yet present themselves as progressive by hosting research on indigeneity—and most, if not all, the “critical” academics believe in this false progress.

Even while a student is learning about resistance movements, the pedagogy of these institutions prevent resistance. A student’s curriculum vitae is more important than her health. Lack of sleep, energy, and time is glamorous. Self-worth is measured by “production levels.” Students’ engagement with feminism is restricted only to the papers they write on sleepless nights; they are rendered incapable of attending events, establishing interpersonal connections, or practicing feminism from day to day.

Students are fed mainstream ideas of justice that suggest undergraduates should spend a summer in Rwanda studying human rights, reinforcing American hegemony and satiating a savior complex, rather than donating their privilege to local Rwandan organizations.

The aesthetic productions of college campuses, the extravagant displays of wealth, are another element of academic oppression. Many college campuses are situated in neighborhoods suffering from generational poverty. Some universities contribute to gentrification by adding to the Eurocentric “beautification” of neighborhoods. Professionalism is encouraged without any analysis of how it disenfranchises students coming from poor communities of color and discourages gender diversity.

Despite such marginalization, non-white bodies are entirely necessary for the predominantly white institution to sustain itself. The subjugation of racialized bodies is needed for whiteness to maintain its power in academia. Racialized bodies are meant to maintain the facade of inclusion, to fill a diversity quota, to be an object of study. The violence of white academia relies on bodies of color, and it is always at our expense.

When you consider the costs of being in academia, self-care becomes revolutionary. When you are all at once queer, gender non-conforming, and of color; when you are a cultural encyclopedia for white peers and professors and the sole representative of every voice in the margins; when you are asked to be complicit in the generation of revenue in exchange for human lives, particularly Black lives; self-care is revolutionary and resistance is necessary.

What use does one have in a voice when it is ignored, deliberately misinterpreted, tokenized, and co-opted without consent by those with more power in the academic industrial complex?

We are left to find the language of/for resistance while reckoning with the role of language in centuries of colonialism, slavery, and genocide.

The constraints of English play out structurally as they do individually. How do queer and trans people of color find the language to describe ourselves through gender norms made by and for white bodies?

We bear the brunt of this white, colonial logic every day. We are searching for genders and sexualities through a language that is not our own. We are constantly wading across a void that we were thrown into without consent, searching for what was stolen, what was taken from the root, not knowing what we’re looking for, not knowing whether we’ll ever find it.

English is a language made to hurt me. No amount of academic instruction will change that.

I speak tiếng Việt as a way of holding onto the heritage that I sought to erase years ago. It is my way of chanting into existence an autonomous future for myself and for other queer and trans people of color in the diaspora.

I speak tiếng Việt for myself. For my childhood self who wanted so desperately to be more white, more masculine. For my present self who is boldly claiming subjectivity in my own language. And for the person I see ten years from now, who will be overcome with self-love.

I will speak all of the words stolen from me. 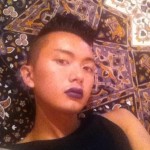 Alex-Quan Pham is a Vietnamese queer dreamer. Their favorite word is river. They resist the colonialist, capitalist, white supremacist cisheteropatriarchy through writing, learning, loving, and healing.