Back then, when everything seemed so sure

I was twenty-five, and she was thirty-five,

she found me in the lobby of the movie theatre.

I was swept away watching her film.

The choice was clear, she told me later,

my hair fanned out against her pillow.

She knew, more than I, how it felt

to long for a woman’s touch. How

it felt to lose your face in her hair.

Her fists closed so not to scratch your skin.

And after years, never tire of her,

even as we crumble and fall apart.

I can only sleep with you, she said,

time I french kissed. It was only later

I realized what she meant.

She was thirty-five and drew from my nether.

Something I never knew I could give.

Maybe it was curiosity that made her touch me

at first, and then, when I made sure to be good,

selfishness, because it would come back to us

two-fold. Though tenderness was never routine,

but always constant and moving. Later in pain

until they have ache in them.

I met a woman who could never sleep

with another until she met me.

When it ended, I had new hands and

a new heart. Slow lightening to what it

meant to be a woman, unheroic, and fleeting.

You brought me a basket of fruit

I’m not sure what you placed inside.

But I know you. You: always turning the

I imagine at first, you gently choose a lone

yellow grapefruit to nest in the wicker.

Nothing ever ends. After some time, it would crust open.

Why does red flesh taste so good?

One afternoon, as our legs weaved into another,

our intricate design was interrupted.

He is staring at us, I whispered in your ear.

You kept gently playing with my hair,

Cradling me, never looked up

from the sun’s glare in my face.

I will confess. I insisted, Teach me.

So, you finally whispered back,

we have too much self love.

How long did you wait

with the basket of fruit realizing

I would never come home?

when we began to walk,

you held out your hand

I took it in, and never let go.

bites into an apple.

A good man is hard to find—Flannery O’Connor

The Flannery I’m curious about is a

She moved far away into

the worlds she made.

I think we’d be friends.

just what I wrote above, and

or that you look cute in glasses,

but because you’re into peacocks.

Tiers of small pregnant suns in

Your peacock waddles into your lap, then mine.

For days, he left our home in Southern California

for somewhere else in Southern California.

I imagine him walking quietly and sharply,

One day, he brought one home.

It lay in the freezer.

I opened up the heavy door, peering in,

But what I found was a

A covering of aluminum foil.

Inside, a small brown mound.

We found those fish

all dead in a puddle on the beach

not too far from where we stood

for hours trying to

catch something from the ocean.

We took them home in plastic bags

My mom refused to cook them.

I don’t know what happened to those fish

but after that day,

I plucked the string.

Now, I don’t remember if a

makes a sound at all?

Flannery, you wrinkle your nose at my fish story.

But I tell you about my father and his peacock.

So you open up to me about your birds

You live in San Francisco with me.

Or I dream in Iowa with you.

Either way, we love each other

because we’re surrounded by graduate students

whom we both hate.

Perhaps by this time,

my father already passed away.

From the window, I watch you work each evening.

swaying above your head.

I wished I were that light.

I decide to knock on your door, peer in, with a little plate

You look cross by disruption, but give me a slight smile,

after seeing my face, remembering how I look like in the morning.

I’ll leave through, I don’t want to interrupt you.

On my way out I say,

hey, it’s all right, let’s hang out when you’re done.

Peacock feathers are not charity.

We would eat those feathers by the mouthful.

Until our lips color green-gold and yellow.

Our throats open up like a galaxy of gazing, bursting suns!

We eat until it is too much to bear

Until our heart’s traffic stop

We both cry Mercy Mercy as the feathers

the strangeness of our insides

they will never know 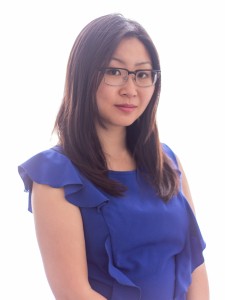 Margaret Rhee is the author of chapbooks Yellow (Tinfish Press, 2011) and Radio Heart; or, How Robots Fall Out of Love (Finishing Line Press, 2015). She co-edited Glitter Tongue: queer and trans love poems, Mixed Blood, a literary journal on race and innovative poetics edited by CS Giscombe, and she is an associate editor for Tupelo Press. Literary fellowships include positions as a Kundiman Fellow, Squaw Valley Poetry Fellow, and the Kathy Acker Fellow at Les Figues Press. She holds a Ph.D. from UC Berkeley in ethnic and new media studies, and a BA in creative writing and English from the University of Southern California. Currently, she is a visiting assistant professor in Women and Gender Studies Department at the University of Oregon.