Everybody Loves a Black Man by Janelle M Williams

By Guest Contributor on November 4, 2015

Everybody Loves a Black Man

Every black man I have ever known or dared to imagine has been You.

You. You. With the long beard and thick brows to match. You sit at the downtown Brooklyn bar waiting, wearing the city and summertime starch like an old Fubu track jacket. For me or her or whomever, you wait. Controlled. You listen to ScHoolboy Q. The beat drops, and you’re luxury. Chitty ching ching could buy anything, cop that. Collard greens. Your momma tries, but granny’s are better. You think about them, order some makeshift kale from the flirting blonde bartender.

You’re here to sell. Sell dreams like The Weeknd’s voice on an after work weekday, happy hour. Sold to the natural nappy hair girls who pour over you like a champagne bath. Delivered. Your skin is the blackest berry now, by night, and sweet corn yellow by day. It changes color like a mood ring, a chameleon, blending, never the same. The WANTED stamp of a criminal, media driven, televised. You put cocoa butter on the cracks and creases, and then watch women lick it away.

You are my best friends. White teeth. Dimples for days. Swagger on one hundred thousand with a lean. Magnetic, you pull for miles around. They love you, then they hate you, then they love you again. The blues in your left thigh. That Honey Jack in your right.

You don’t approach me or her or whomever like you used to, because you don’t need to. Now that you got your shit together, grew up, came up, you pay your rent and your taxes, too.  Girls, women, big, thin, tall, short, lose their heads over you, screaming around town, Zaddy. Daddy.

You met my mother in a time when they were doing the monkey, the robot, the bump, the four top rock, the electric slide. Twinkle toes like James Brown. 1978. Jazz was alive, and Hip Hop was on the horizon. And in those good ole days when you let Curtis Mayfield tell you, It’s Alright, you followed the young lady with mounds of hair tossed under an apple cap. Held her hand. Got in her ear. Whispered sweets. It wasn’t your face or your body, but your mind and your conversation. Twinkle toes like James Brown. It’s alright. 1978.

As a kid, you threw me up. You caught me. Caught in between your bright rays and blind love, both what they had to be. Doing their job, playing their part. Unimaginable. Unmovable. Liberated, even when they threw you in jail for a white man’s crime. Michael Williams. It is such a popular name. I wonder how many whites they’ve mistakenly arrested for blacks. With a name like Michael Williams. Or Michael Jackson. Or Michael Jordan. Or Michael Brown.

But then you died. Did you die? A little each day, they say, torn to pieces. They sprinkled your parts on Morehouse then up the Mississippi River then into Manhattan. They’ll toss you into the Hudson in one-way or another. They’ll drive you there, into the river, half crazy. Or they’ll erase you with whiteout, gentrification.

But in Florida. Or Ohio. Or Missouri. You wore a hoodie. You carried skittles and an iced tea. No hand room for a handgun. You were young or old, what did they call it, how they saw you, a negotiable age. And he followed you, and he deadened you. Another notch, another belt.

You and I both know these are only the high profile cases. That there are more trapped under white sheets or buried underground, screaming out, their restless souls. You and I both feel it. We mourn it. And then we look away, helpless, hopeless. The “buts” and “what ifs” clogging our minds, haunting, taunting us.

But we don’t know what happened.

But we don’t know what happened.

What if that black boy or girl, woman or man, unarmed, was a threat to the strapped cop or the packing vigilante. No matter how ridiculous, without merit, the “buts” and “what ifs” threaten to strangle us. Because it is easy to consider you, a you and not an individual, a human. The WANTED stamp of a criminal, poisonless pigment.

At first, it was the one name I could remember. But now, I can’t name you all, at all. Must I cradle, cater, crumble? What can I do? To help you? No, blue! Don’t haunt my nightmares tonight. Let it be a good day like Ice Cube says.

What is the picture you paint on your good days? Is it Isley Brothers breezy? Is it biscuits and gravy creamy? Is it chalk full of bitches and hoes? You know. You listen to J Cole. You are J Cole, my favorite rapper. And let me tell you what he says, that he knows the difference between an LA sister and an LA ho.

But you did something on one of those late night shows that I haven’t seen in a long time. You told the truth. No gimmicks. Free. I’m letting you know that it ain’t no gun they make that can kill my soul. It’s quality shit, Cole. And I know that, and I love you for that. But come tell me, what is the difference between an LA sister and an LA ho?

You demean me, entice me, invite me, deny me in your raps. Even the best of you do. And I wonder what it is that makes us relentlessly, recklessly love you, King Kunta. I listen to your raps, your no doubt, you’re no doubt. You are Kendrick Lamar. You listen to Kendrick Lamar, and let me tell you how that sounds.

Your new album sounds like a war on record. A beautiful civil war. The exploitation of something majestic. To pimp. A butterfly. It is those two sides I hear in The Blacker the Berry. The one is conscious, knowing. And the other is hidden behind emotion, hypocrisy. And what you have ultimately done here can be likened to the white news anchor who asks after discussing the over policing of black men and women, “but what about black on black crime?” Even if divulged from your emotional state and your personal experiences, it is fire you play with, Kendrick. To cast your sins on our sons. “How Can They Respect Us if We Don’t Respect Ourselves?” Fire. To pimp. A butterfly.

Is there something to say about gangs and drugs? Yes, it’s true. Yes, yes. You, you. Killed that boy. There are hundreds of human heads on your wall. Taxidermy, screaming out, their restless souls. I wonder, you wonder, who put them there.

If you’re still alive, if America has left any piece of you, I’ll protect it. I’ll be mad for you. I’ll scream for you. I’ll fight for you. How many times can I write to you? A novel for you. A story for you. An essay for you. A life for a lifetime for you.

But will you fight for me? Will you write for me? Protect me? Or will you just sit at the downtown Brooklyn bar, luxury, flirting with the blonde bartender, ordering makeshift Kale? An honest question. I need an honest answer. 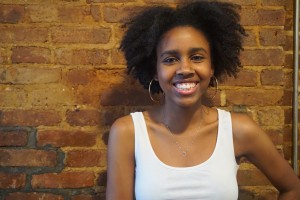 Janelle M Williams is a black southern writer from Decatur, Georgia. She is a graduate of Howard University and an MFA candidate at Manhattanville College. Williams is currently at work on a novel and a collection of short stories.