THE MOON IS TRANS

The moon is trans.

From this moment forward, the moon is trans.

You don’t get to write about the moon anymore unless you respect that.

You don’t get to talk to the moon anymore unless you use her correct pronouns.

to bow down before her and apologize for the sins of the earth.

She is waiting for you, pulling at you softly,

telling you to shut the fuck up already please.

Scientists theorize the moon was once a part of the earth

that broke off when another planet struck it.

Do you believe in the power of not listening

to the inside of your own head?

I believe in the power of you not listening

to the inside of your own head.

This is all upside down.

We should be talking about the ways that blood

but we’re busy drawing it instead.

The moon is often described as dead, though she is very much alive.

for any extended period of time

in all of her existence, but

She is constantly moving away from you the only way she can.

She never turns her face from you because of what you might do.

She will outlive everything you know.

It is quiet in the morning.

A loud clap of thunder

from earlier this month

is stuck in the window.

I dress myself with

and go outside in the wind.

and break into pieces

You come out and find me

alone in the grass

covered in a purple rash.

You call me lacking

and kiss me with the words

that erase me from existence.

comes from a place of dying.

The woman is about hair

gathering on the ground and between the breasts

that move up and down with each breath

In twenty years I will exist.

Even if i’m dead in twenty years I will exist

more than I do now.

I shave my legs in the shower

until my ass goes numb.

The water gathers all of me around

and says “that’s what you get”

“that’s just how the world works”

as if they’re happy about it.

where the light from inside moves

around the room to see itself reflected.

The woman sees herself in everything and nothing.

You can open the news and read

anything you want to.

That’s the magic of being alive here.

You can even read about yourself 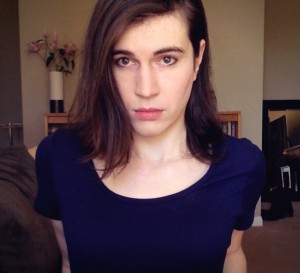 Joshua Jennifer Espinoza is a trans woman writer living in California. Her work has been published in Shabby Doll House, The Offing, Word Riot, and variously online. Her first book “I’m Alive / It Hurts / I Love It” was released by Boost House in 2014.