Op-Ed: Broaden Sexual Assault Education and Legislation to Include All Students, in College and Not – The Feminist Wire

Home / Academia / Op-Ed: Broaden Sexual Assault Education and Legislation to Include All Students, in College and Not

Op-Ed: Broaden Sexual Assault Education and Legislation to Include All Students, in College and Not

Since its opening in 1895, Low Memorial Library has become one of Columbia University’s most admired architectural sites. Its magnificent façade and columns draw photographic attention from tourists, guests, and prospective students on a daily basis. A few weeks ago, the building’s attic confronted visitors, most of whom prospective students, with an unequivocal message. With bright blue flashing letters, a projector wrote over the attic’s statements on the public good and the grace of almighty divinities with three sobering words. “RAPE HAPPENS HERE”. The intervention was organized by No Red Tape, whose mission is to raise the visibility of sexual assaults on college campuses and to confront the culture of impunity that too often haunts these cases. As a city, state, and country, however, we will have to broaden the conversation around college sexual assaults if our goal is to dismantle, rather than reinforce, the classed, raced, and educational lines that divide young New Yorkers. 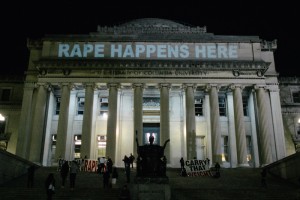 Try a Google news search for ‘sexual assaults’ and ‘New York’ and you’ll find that more than half of the resulting hits will lead you to a college campus. Mirroring a broader national trend, New York’s imagination around vulnerability, risk, and injustice seems too narrow when it comes to the various forms of gender-based violence that we are facing. By highlighting one group of learners (college students), New York risks privileging the privileged.

Governor Cuomo and New York City’s Public Advocate Letitia James are both pushing for legislation to protect college students from assaults and ensure they get relevant education, training, and information as early as orientation. According to Christine Quinn, who wrote about Cuomo’s proposals in the Huffington Post, “[t]hese measures will ensure that all of New York’s college and university students have a very clear understanding of consent, their rights as victims, and the safeguards in place to keep them protected.” The Campus Safety and Accountability Act, which was recently reintroduced by a bipartisan group of twelve senators, similarly pushes for the creation of new campus resources for survivors and training programs for college personnel. While these steps are necessary, their impact would be much greater if they were to focus on educational institutions that reach New Yorkers from all walks of life, including public high school and middle school students. Not every college-aged New Yorker is actually in college, an absence that does not protect them from risk and certainly does not render their need for resources less urgent.

As Callie Marie Rennison pointed out in the New York Times last December, “young women who don’t go to college are more likely to be raped.” Having analyzed more than 15 years of victimization survey data from the National Department of Justice, she argued that women who don’t attend college “are victims of sexual violence at a rate around 30 percent greater than their more educated counterparts.” There is no reason to assume that these national dynamics would somehow skip New York. Neither should we be under the impression that gender-based violence issues only start after high school. In 2011, no less than 10.4 percent of male and female high school students reported that they had been “hit, slapped or physically hurt on purpose by a boyfriend/girlfriend within the past year.” In addition, a 2013 study by La Vida es Preciosa, a New York City based organization that supports Latina teens with mental health problems, found that thirty-five percent of the young women they served had suffered sexual abuse. Many of these young women live in poor neighborhoods. Under the new legislative proposals, these individuals may become less likely than their peers with access to educational opportunity to obtain the crucial information and education that could protect them from sexual violence and to provide justice and support in cases where sexual assault occur.

Much of this information is not readily available in public high schools in New York. According to Stephanie Nilva, the Executive Director of Day One, “sex education in high school may tell you how to use a condom, but no one tells you what to do when your partner refuses to use one.” Kristine Gallagher, from the Sex and Law Committee of New York City’s Bar Association, added that this type of prevention programs should start as early as Kindergarten. “To prevent sexual violence before it even starts we must connect norms of sexual violence with the need to prepare young people to engage in healthy relationships from an early age.”

Statistics reveal that gender-based violence affects school-aged New Yorkers in other ways as well. New York City police responded to an average of 765 domestic violence incidents every day in 2013. Given the notoriously low reporting rates on domestic violence, we can only guess what the actual numbers are and how many children are involved as victims and witnesses. What we do know is that there are many, and that they will have special needs.

If inclusiveness is the goal, then heteronormativity, as a form of gender-based violence deserves a central place in these conversations and initiatives as well. LGBT bullying often begins at a young age and, if unchallenged, often matures into physical assaults. A 2011 study shows that young people with non-conforming gender identities are at higher risk of sexual assault, attempted suicide and mental health issues than their heterosexual peers. It is only a couple of months ago that the 12 year old Ronin Shimizu, from California, committed suicide after having being bullied for his cheerleading activities. These tragedies highlight that young people need to start thinking about gender norms, gender identities in primary school.

College sexual assaults may thus be better conceived as a symptom of the sexism and heteropatriarchy that exist throughout society. Because these ills are not confined to the boundaries of college campuses, legislation focusing exclusively on college students, by definition, is a partial solution.   We must reach out to all students of all ages and equip them with the resources and information they need to challenge and change the gendered norms and dynamics that fuel such violence, vulnerability, and the impunity of perpetrators. New initiatives are being carved out and promoted, and New York is hailed as a leader; the state, and our nation, must ensure that legislation is inclusive of all young people, in college and not.
Cited:
http://www.dayoneny.org/

Maria Hengeveld studies women’s rights at Columbia University. She is interested in youth and gender in Southern Africa and writes for different websites, such as Africa is a Country and Dutch feminist magazine Tijdschrift Lover

Related Itemsfeatured
← Previous Story “Race and gender are not the same!” is not a Good Response to the “Transracial” / Transgender Question OR We Can and Must Do Better
Next Story → COLLEGE FEMINISMS: Exploring Meghan Trainor’s “Feminist” Message