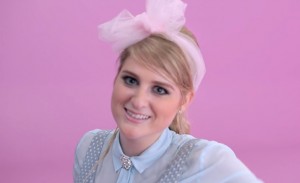 Meghan Trainor in “All About That Bass”

A “new” wave of feminism (and anti-feminism) in pop culture has resulted in a newfound respect for feminist pop songs and icons. One of the more popular feminism-focused celebrities on today’s stage is Meghan Trainor, a self-proclaimed body positive feminist who specializes in poppy, aesthetic doo-wop songs that encourage young girls to reject societal pressures and love themselves for who they are, not what they look like.

While her message seems positive and empowering for young women, a closer inspection reveals a few unsettling truths about Trainor’s “feminist” message. Behind the buzzwords, many of the ideas expressed Meghan Trainor’s songs actually (re)enforce stereotypes detrimental to feminism.

Trainor burst onto the music scene in 2014 with “All About That Bass,” which embraces girl power and body-acceptance. Even though the video features women of all different sizes set against a pink frilly backdrop and lyrics like “every inch of you is perfect from the bottom to the top,” both the video and the lyrics are body-critical and neglect to address multiculturalism in feminism—which addresses racial and cultural diversity within the feminist movement and focuses on approaching feminist issues with consciousness of the ways that race, ethnicity, and social class interact with a woman’s experiences.

In her lyrics, Meghan Trainor attempts to address fundamental problems with America’s “ideal woman,” claiming that she “ain’t no size two” and “won’t be no silicone stick figure Barbie doll.” But she fails to address what causes us to discriminate against full-figured women. Rather than attacking the patriarchal idea that women should look a certain way to be accepted by men, she merely turns the tables on thinner women, demonizing them while promoting curviness. Ironically, she seems to be promoting the very societal standards that she claims to hate so much: whether it’s plus size or size two, there is still a “right” way for women to look, one that’s measured by how sexually attractive men find you.

Trainor’s newest single, “Dear Future Husband,” does feminism no better. Similar in tune and style to her last big hit, “Dear Future Husband” is Trainor’s plea for a man to treat her right, give her what she needs, and be the perfect husband. It’s hard to begrudge one’s right to dream of the ideal mate, but Trainor’s wish list is problematic. Many of her examples of being “treated right” present her as a passive object, receiving gifts, and special treatment from a man.

Trainor also plays heavily upon traditional gender roles in her examples of how she wants to be treated, neglecting to embrace her own personal preferences, and instead relying on a prescribed set of female desires (which apparently haven’t evolved since the 1950s). She may poke fun at gender roles by dressing her music video in retro garb, but Trainor still occupies the role of the doting housewife and promises that if her husband buys her flowers, tells her she’s beautiful, and always lets her win arguments, then she’ll be the “perfect wife” by buying him groceries and letting him get that “special loving” every night. Aside from prescribing the most confining gender roles and heavily relying upon white, heterosexual culture to define her perfect life, Trainor seems to consider it “ideal” to trade household chores and sexual appeal for gendered gifts.

It is clear that many of Meghan Trainor’s songs were written to market a feminist message to the public in a purposely non-controversial, societally acceptable way. But rather than challenging the framework of the societal problems she targets, Meghan Trainor merely changes the context while perpetuating the body-negative and gender-role-embracing behavior that is detrimental to feminism.

Instead of using her songs to intervene in patriarchal society that treats women as inferior objects, Meghan Trainor takes an equivocal egalitarian stance on the matter: “You’re not allowed to treat me like an inferior object,” she essentially sings, “but as long as society favors women like me, all the other girls are fair game.”

Related ItemsActivismbody politicsCultureentertainmentfeminismGenderHistoryMeghan TrainorMusicPatriarchysexismSexualitystereotypeswhitenessYouth
← Previous Story Op-Ed: Broaden Sexual Assault Education and Legislation to Include All Students, in College and Not
Next Story → The Blackface politics of Rachel Dolezal