Memory and Violence: Old South Nostalgia in the Wake of the Emanuel AME Shooting – The Feminist Wire

Home / Activism / Memory and Violence: Old South Nostalgia in the Wake of the Emanuel AME Shooting

Memory and Violence: Old South Nostalgia in the Wake of the Emanuel AME Shooting

Since the recent killing of nine Black congregants at Charleston, South Carolina’s Emanuel AME church on June 17, debates about the confederate flag have again surfaced on a national scale, particularly for South Carolinians hoping to eliminate the state’s most overt symbolic tie to its history of slavery and secession.  The flying of the flag on the capital dome, and later on the capital grounds, has been a perennial controversy in South Carolina. However, the flag is not the only symbol through which Southern culture preserves and sanitizes histories of the “Old South.” When discussions about confederate imagery devolve into proclamations about heritage, they evade the problem of why Southern states seek to remember specific aspects of history and how that history is imagined. Old South nostalgia erases a history of racial violence and replaces it with imagery suggesting a benign past in an attempt to absolve responsibility for slavery, Jim Crow, and their legacies. 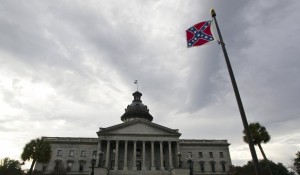 Supporters of Old South imagery insist that the displays are means of remembering and preserving cultural heritage, but there is little danger that the confederacy will be forgotten, especially in Southern states. Memorials to the Old South permeate the landscape. Small towns and large cities alike have erected memorials to their confederate war dead and museums dedicated to the confederacy flourish. Tourists and locals can visit restored plantations, where they may hear about the glories and gaieties of Old South society.  Gas stations sell “mammy” themed saltshakers and teapots. Highways are named for Jefferson Davis. State offices close for Confederate Memorial Day. Maurice’s BBQ, a Columbia, SC restaurant chain, emblazons its bottles of sauce with confederate flags. SC abounds with statues of confederate and segregationist leaders. The industry of confederate nostalgia is not only pervasive, but also celebratory. One only has to look so far as the 2010 “Secession Ball” held in Charleston, in which South Carolinians donned antebellum apparel and danced to celebrate the 150th anniversary of the state’s secession from the union.

On June 17, Dylann Roof spent an hour at Emanuel AME church before shooting and killing State Senator Rev. Clementa Pinckney, Cynthia Hurd, Tywanza Sanders, Sharonda Coleman-Singleton, Myra Thompson, Ethel Lance, Susie Jackson, Rev. Daniel Simmons, and Rev. DePayne Middleton-Doctor. Dylann Roof was explicit in the racial motivation of this shooting. A witness reported that he stated, “You rape our women and you’re taking over our country.”  More images and words of racial violence by Roof have emerged since his arrest.  Roof appears alongside confederate flags and in front of confederate history museums. He believes that an epidemic of “Black violence” is occurring in the US. These images, statements, and ideas are familiar to those who know well the long history of white supremacy in the US and US South in particular.  Roof’s attachment to symbols such as the confederate flag has sparked discussions of heritage, memory, and history in the South. Some Southerners argue that the flag and other Old South imagery are important aspects of Southern cultural heritage while also insisting that they are not symbolic of the white supremacist regimes that spawned them. There is a need to confront the ever-present problem of how Southern history is distorted and reimagined, and how that distortion facilitates individual and collective acts of racist violence.

To claim that confederate images are mere attempts at historical preservation is to ignore the obviously celebratory and nostalgic nature of these displays. The image of the South and its history that is projected is one of a genteel, aristocratic antebellum society graced with mansions and Spanish moss, moonlight, and magnolias. If slavery is represented, it is often in the figure of the faithful, content slave—Scarlett O’Hara’s “mammy” rather than the enslaved person as a target of legal and social violence. These images hide the labor, the interpersonal violence, and the legal violence that created the profits and social systems that sustained the Old South. When Southern history is presented in this manner, it conveniently elides the fact that chattel slavery was part and parcel of creating the “beautiful” Southern cities, the “stately” plantations, and the “genteel” life of parties and balls. The enslaved people who labored in and outside of plantation houses, small farms, and in cities are shunted to the side or reimagined as content with their status—their history, so central to the creation of the South, is misrepresented and rarely prioritized.

Old South nostalgia also covers the violence that continued after emancipation in the forms of post- Reconstruction repression, the long era of lynching, and the lingering legacies of segregation. These events were, and are, part of Southern history all the same. We cannot separate these institutions and events—there is no honest way to remember plantation life without the slavery that enabled it and no honest way to consider the confederate flag without its ties to segregationists in the 1950s and 60s. Insisting that we can sanitize Southern history not only does a disservice to the many lives lost in the struggle for Black liberation in the South, but it also perpetuates tradition of mythmaking and violence. 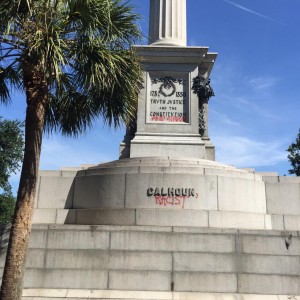 Southern history cannot be divorced from the institutions of slavery and Jim Crow. So long as nostalgia characterizes the memorialization of the Old South, it will render invisible the violence inherent in that way of life and the legacy of marginalization that it has caused. Roof’s manifesto displays a stunning belief that histories of Black oppression in the South are “lies, exaggerations, and myths” and that slavery was a positive institution. Old South nostalgia facilitates this same narrative. After all, if the social customs of the Old South were truly horrific, why would people come together to celebrate secession? If slavery was truly violent, why would plantation museums often refer to slaves as “servants” and present whites primarily as “kind masters?” Why would there be a booming trade in Black caricature figurines and confederate flag decals? These images, logics, and practices all naturalize white supremacy by insisting that the social and legal systems of the Old South and the Jim-Crow era were worthy of celebration.

There are cracks, however, in the edifice of white supremacy. The Old South as a halcyon society is a myth, and its mythology ties in with a persistent pattern that emerged yet again in the shooting at Emanuel AME. Roof invoked the purported rape of white women by Black men as a justification for his violence. The myth that Black men are sexually threatening toward white women is not new, nor is the critique of this myth. The same logic was used to justify lynching throughout the South. Even more broadly, a pattern of imagining the oppressed as the authors of their own oppression is common in white supremacist ideologies. Southern whites used slave revolts, real or imagined, to justify legal repressions of Black populations and abolitionists. After emancipation, whites relied on fears of purported Black violence and crime to support segregation. White fears of Black populations have been used to excuse the legal, social, and political repression of Black communities throughout the US, and especially so in the South. In contemporary responses to police shootings of Black people, the meticulous focus on the appearance and background of those killed performs a similar function. Rather than attempting to eliminate violence against Black bodies and communities, this discourse validates it by reifying myths of Black violence. The myth of the Old South and the myth of pathological Black violence are inherently intertwined, and we cannot address one without the other. These myths survive long after the formal institution of slavery was destroyed, and they are still being used to justify violence against Black communities, as evidenced by the Emanuel shooting. Failure to confront the realities of history and culture sustains a climate in which white supremacy thrives. However, when we engage with the connections between cultural imagery and contemporary violence, we rupture the myths used to rationalize social, legal, and individual violence against Black communities. 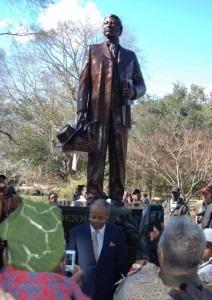 Denmark Vesey Monument. Photo by Adam Parker at The Post and Courier.

Confronting white supremacy requires an honest conversation about Southern history and how that history is represented. The shallow and violent understanding of heritage that has dominated conversations about confederate imagery in the South must change. If we want to remember and preserve, we must not attempt to decouple Southern history from race, violence, and repression, and we must also illuminate the moments of resistance and resilience to white supremacy that are part of the South’s history. Importantly, we must remember that the South is not the only place in which histories of violence are erased in later memory. But because Southerners have made the argument that Old South imagery is a cultural imperative, the symbolism of these images deserves critical attention. If we are to dismantle white supremacy, we must see culture and history as they really are—explicit acts of violence against Black communities. Whites must cease to be complicit in, profit from, and celebrate sanitized images of the Old South.

For some further information on local activist groups fighting against white supremacy and oppression in the South, visit: 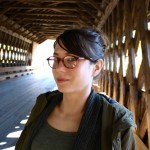 Jamie Huff is an assistant professor of Criminal Justice at Bridgewater State University in Massachusetts. Her scholarship and teaching interests include critical legal theories, legal history, and marginalization in the US South. She is a former resident of Charleston, South Carolina and an alumna of the College of Charleston.