Sheila is fat, real fat. Sheila calls herself that. When Sheila stood up and introduced herself to her Women’s Studies class, the professors’ mouth dropped so far and so fast that she couldn’t keep her

snack from falling out and onto her blouse. Her entire face looked as though it had slid right off its bone. An expedient recovery though.With no time to shake off the wasabi dried peas, the incredulous teacher launched right into a third-wave attack on the American beauty standard and of Sheila’s beyond crass self-identification. But Sheila didn’t falter, nope, she stood even taller. Large hoop earrings slapped at her chins with every roll of her Cujo sized head. Back and forth between the mounds of her shoulders. Sheila grabbed hold of her too many hips, pursed her Ferrari red lips and haughtily addressed the Professor.

“Let me see if I can get this straight. This sexy beast over here with a goatee and a perfect set of double d’s…”

Sheila flashed a wink and a smile in the direction of an awkwardly postured androgynous person.

“Anomaly here, with their fine ass self, gets a collective nod of approval at requesting to be referred to as ‘them’ and ‘they’, which is more than fine by me, but when I tell you that my name is Fat Sheila, you go and spit up all over your nice leisure suit. Talkin bout ‘sensitive terminology’ and shit.

Well, my name is Fat Sheila Miss, a name that I have had to answer to for most of my life, a name that my own family gave me. A name that I taught my own self how to love. Sure, I could change it but outside of here I will still be Fat Sheila. But if it makes you uncomfortable, if my name makes anybody in here at all uncomfortable, well y’all can just go on ahead and call me Anomaly too. Shit.”

Fat Sheila stood face to face with her professor who was no longer snacking, who was no longer making eye contact. Fat Sheila turned her raised up penciled on eyebrows to the class. All but one head was hung. Anomaly half-smiled. Fat Sheila nodded, said “Mmhmm” and took a seat in a chair that was much too small for her big fat ass.

More than a handful and way too much for most to handle, Fat Sheila was unapologetically obese. She filled up two seats and part of the aisle on the city bus and never once did she offer to pay double fare. It just wasn’t fair that others had to pay to stand. They let her know it too, yet, never once did she offer an apology. Fat Sheila just didn’t seem to give a fuck that she took up too much space.

She would smash right into an already crowded elevator. Dive right into an already crowded swimming pool. She even had the audacity to travel by plane, to get a massage, to go to the movies on opening night. Never once did she apologize that her ass sat on the lap of the passenger beside her, or that her masseur was making the same amount of money while doing twice the work. Nope. Fat Sheila would sandwich herself right in between two normal sized people; for a two hour movie. Pouring salt in their wounds by laughing out loud, by eating popcorn, by licking the grease from her sausage link fingers but mostly by having knuckle tattoos that read “ FLAW LESS.”

Fat Sheila, she was always the elephant in the room, only she didn’t seem to know it.

Not only was Fat Sheila unapologetically obese she was also so bold as to put her lumps on parade. Leggings, jeggings, tank-tops and half shirts, Fat Sheila wore all that shit.

Fishnet, short-shorts, thongs and false eyelashes. Like gag us with a spoon, right? But there she’d be, in broad daylight, dressed in clothes that even hot girls might reconsider. When Fat Sheila strutted, it was hard to ignore. Some people tried. Most people saved their gawking for Fat Sheila’s backside, making it that much easier to keep the ridicule behind her.

But some people liked the way that she worked it. Men would often times call out to Fat Sheila. “More cushion for the pushin” they’d say. “Trade you a piece of cake for a piece of that…”

“Hey baby, let me roll you in flour and search for the wet spot.” But Fat Sheila would just keep on walking, one plump foot in front of the other; as if she had the right to be selective.

Cat calls and last calls were how most men saw her and when Fat Sheila would turn down the advances instead of being grateful, most men got angry, indignant. Some berated her. Some spread rumors.

Some even forced her to take the bone that they’d thrown at her. But not even that could stop Fat Sheila, hell, she’d been in training for years, all of them.

It seemed as though everybody, everywhere and from all walks of life had some pretty good ideas on how Fat Sheila could better live hers. Ideas that had maybe never even occurred to her.

Like maybe if she would just exercise. Or try going to matinees instead of opening night. If Fat Sheila would just accept that she’s fat and stop dressing like she’s hot, maybe people wouldn’t be so cruel. She could try apologizing or at least acknowledging how much space she takes. Like maybe she could say “excuse me” for a change or take it as a compliment when people tell her that she has “such a pretty face.” Who knows why Fat Sheila makes her life so much harder than it has to be. Seriously, couldn’t she just try and fit in? 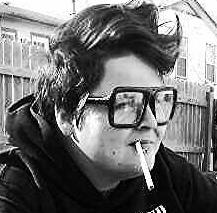 Laurie Reid is a water-born cat whisperer, a small-time thumb-wrestling champion, and a life-long student of the human condition. Her passions belong to the ever eluding search for truth, to social justice, and to the reunification of soul and skin. Laurie has been playing with the written word upon her first introduction to the alphabet. Her earliest works were published on bathrooms stalls, chalked on side-walks, and unceremoniously scribbled on the backs of fast-food napkins. She is currently working on broadening her literary medium while perfecting her day-dream of resurrecting the covered-wagon.