Highway of Tears: A Review – The Feminist Wire

Highway of Tears: A Review 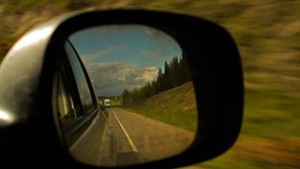 I first viewed the stunning documentary Highway of Tears, directed by Matt Smiley and produced by Smiley and Carly Pope, during a week in which I was also teaching geographer Katherine McKittrick’s Demonic Grounds: Black Women and the Cartographies of Struggle. McKittrick explores the complex racial and gender entanglements of place and space. She writes, “Concealment, marginalization, boundaries are important social processes. We make concealment happen; it is not natural but rather names and organizes where racial-sexual differentiation occur.”

I invoke McKittrick here because Highway of Tears is as much about place – in this case, remote British Columbia – as it is about the girls and women who live and die there. From the opening shot of highway pavement rushing by and a recognizably Pacific Northwest landscape viewed through a vehicle’s side mirror, the film offers a searing portrayal of the ways too many girls and women in the region suffer from geographic neglect. The eponymous Highway 16 of the film’s title references the lack of services and economic opportunities that render B.C.’s girls and women – especially Indigenous girls and women – vulnerable to profound and preventable harm.

Highway 16 is a 724-kilometer stretch of road between Prince George and Prince Rupert. Since the 1960s, at least 18 girls and women, mostly from Indigenous communities and some as young as 12, have disappeared or been murdered along the highway. Yet, until a young white woman, Nicole Hoar, went missing, the media had paid scant attention, though the effects of these disappearances and murders were acutely felt “as a hole in the heart of a community.” 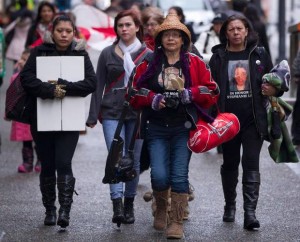 Families of the missing women march as they make their way in to review the report from the Missing Women Commission of Inquiry in Vancouver. (Source: John Lehmann/The Globe and Mail)

Victim advocates and tribal community members cite racism for why the disappearances and murders of primarily First Nations girls and women have not been systematically addressed. They challenged the Canadian government and provincial lawmakers to pay attention, resulting in the Missing Women Commission of Inquiry in 2010. The Commission’s report notes, “The missing and murdered women were forsaken by society at large and then again by the police. The pattern of predatory violence was clear.”

Filmmaker Smiley says, “The film was made out of passion, and my main goal was to shed light on an issue that I took to heart. There’s still a lot of work to do with regards to making our communities safer for women and girls. This is not just an issue in northern BC. We’ve seen the horrific numbers across Canada, with over 1,200 missing and murdered indigenous women and very few of these cases getting any exposure in the media. In the U.S., we have similar issues with violence against women. Same goes for Mexico and many places in the UK. The next step is opening the dialogue and collectively finding solutions to a) solving the cases that have been ‘forgotten’ and b) collectively taking action to prevent future cases from occurring.” 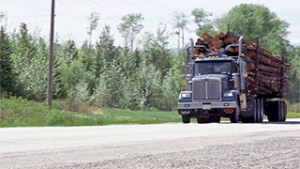 Highway of Tears, narrated by Canadian actor Nathan Fillion, delves into these issues through interviews with First Nations community leaders, family members, RCMP representatives, and human rights organizations. Seeking to flesh out “the root causes” of violence, Smiley and his team admirably refuse to settle for the easy explanation that northern B.C. is simply rife with serial killers. Rather, they situate the abductions and killings as crimes of opportunity and circumstance. Girls and women may be vulnerable to highway violence because they are hitchhiking, to be sure. But why, the film asks, are they hitchhiking in the first place? Who are these girls and women, what are their hopes and challenges, and how have structural factors positioned them as victims? The film is simultaneously a sobering look at a pandemic social issue, a glimpse into life in northern B.C., and a fierce call to action.

Smiley says he was drawn to the story after hearing about Nicole Hoar: “I was on a camping trip in Cluckuz Lake with my family and we all started sharing stories one night around the campfire. My brother-in-law and a few of his friends work in the reforestation industry, so they were all affected by Nicole’s disappearance…When I went back home to Los Angeles, her story stuck with me. I started researching it on the Internet [and] all these articles about the Highway of Tears started popping up. I hadn’t heard the term before, nor had I ever heard of countless women going missing off the side of the Highway. It struck me. I began corresponding with a few family members and various other people that were mentioned in the articles I read. It was those initial conversations that really hit me. There was this empty sense of loss they all shared. I wouldn’t say helplessness, but the feeling I had was that the general public was not understanding the struggles they were facing.”

Highway of Tears does a remarkable job of showcasing these struggles, including systemic racism, extreme poverty, an unemployment rate as high as 92% in some areas, and other structural barriers to individual and community thriving. First situating the Highway 16 murders in historical context, the film narrates the “cultural obliteration” of Indigenous people through the residential school system. Referred to by one of the film’s subjects as the Canadian Holocaust, the aim of the schools was “character redesign” of Indigenous children to conform to European standards. Language, dress, family relationships – all were targeted in children who were forcibly removed from their homes. The Canadian government has apologized for the residential schools, acknowledging they were a mistake. But, as the film demonstrates, the colonizing effects are pervasive and long lasting, and Canada’s most vulnerable citizens must bear them.

One of the most significant effects of this system with regard to violence against girls and women is that the Royal Canadian Mounted Police (RCMP) was responsible for removing children from their homes. The word for “police” in the Carrier language translates as “those who take us away.” A report by this name from Human Rights Watch documents widespread mistrust of the RCMP among Indigenous girls and women, as well as rampant abuse ranging from harassment to assault and sexual violence at the hands of RCMP officers. The report notes, “Not surprisingly, indigenous women and girls report having little faith that police forces responsible for mistreatment and abuse can often the protection when they face violence in the wider community.” 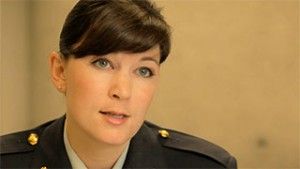 The film also references the highly visible Judge Ramsay case as a particularly egregious example of officials failing to protect girls and women; Ramsey received a seven-year prison sentence for sexual assaulting young girls, all Indigenous. As Crystal Clear, one of the film’s more memorable subjects, asks: “Who policies the police? Who judges the judges?” (Ramsay died in prison, of cancer.)

As for the RCMP reaction to the film, Smiley states, “It took a bit of time for them to jump on board with the project, but they’ve seen the work I’ve put in and we’ve all shared information with each other in a mutually beneficial way. The film doesn’t always show them in a favorable light, but we can’t shy away from people’s perception. There’s certainly more community work to do, but they’re 100% committed to continuing their outreach efforts in order to show the family members they want to solve the current cases and help prevent others from happening. They are very supportive of our screening the film, which I find great as I think the project is helping bring people together.” 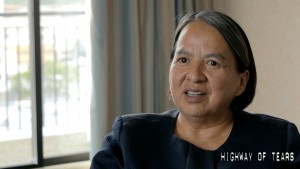 A number of the film’s commentators point to sexist and racist cultural stereotypes that contribute to endemic violence against Indigenous girls and women. Mavis Erickson references the Hank Thompson song “Squaws Along the Yukon” as a prime example of the negative ways that Indigenous women are represented. Mary Teegee, Director of Child and Family Services for Carrier Sekani Family Services, notes that Indigenous women are all too often portrayed as “whores.” And Barbara Ward-Burkitt, Executive Director of the Prince George Native Friendship Centre, narrates her own history with domestic violence, recognizing the normalization of violence in fractured communities. Cultural stereotypes, systemic racism, widespread misogyny, and everyday hardship and violence all contribute to a culture in which Indigenous girls and women are seen as disposable. 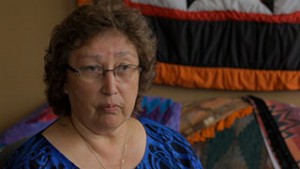 So what can be done? Filmmaker ​Smiley says, “While my overall goal would be to push the Canadian government for a national inquiry, the biggest change I’d like to see is proper funding for safe and affordable transportation in the north. That being said, even if public transportation is restored in the area, the government will need to fund smaller outreach organizations like the Highway of Tears Initiative to ensure training programs are in place to educate people on proper safe travel. It sounds like something that would be fairly common sense, but in some of these communities, hitchhiking is a way of life, so we need to educate people not only about the dangers of hitchhiking, but show them other ways of traveling. “

Despite the need for better public transportation and other services in northern B.C., the provincial government has failed to implement a more extensive transit system. Nor has Prime Minister Harper responded to advocates’ repeated requests for a national inquiry into the murdered and missing women. While criminal investigations and DNA analysis have helped to identity a handful of assailants, and thus to provide some measure of closure for families, the majority of cases remain unsolved.

In 2014, the RCMP released a new report showing that between 1980 and 2012, more than 1,000 Indigenous women and girls have been murdered—including Halifax University honors student Loretta Saunders, whose thesis topic was the missing and murdered women in Canada.