What More Can I Say? (A prose-poem on antiblackness) – The Feminist Wire

Home / Poetry / What More Can I Say? (A prose-poem on antiblackness)

What More Can I Say? (A prose-poem on antiblackness)

By Guest Contributor on September 3, 2014

“…[T]he grammar of their suffering–was indeed an ethical grammar. Perhaps it is the only ethical grammar…for it draws our attention not to how space and time are used and abused by enfranchised and violently powerful interests, but to the violence that underwrites the modern world’s capacity to think, act, and exist spatially and temporally.” – Frank B. Wilderson III, Red, White & Black: Cinema and the Structure of US Antagonism

It seems safe to assume—by any number of rubrics—that there is a strong correlation between black life and premature death. Surviving while black produces a range of feelings: guilt, resolve, exhaustion, gratitude, anger, pride, and fear. The word “survive,” which derives from two Latin words “super” (in addition) and “vivere” (live)—and is typically defined as a continuity of existence despite danger and hardship—brings such feelings into stark relief. What, we might ask, does it mean to live a life that exceeds life?

“…[T]he everyday violences that black(ened) bodies are made to bear are markers for an exorbitant freedom to be free of the marks of a subjection in which we are all forced to participate.” – Christina Sharpe, Monstrous Intimacies: Making Post-Slavery Subjects

“If one is nearly everywhere told that one is not fully a human being, but one finds oneself struggling constantly with human responsibilities—over life and death, freedom and lack thereof, virtue and vice—the moment of theoretical reflection demands engagement with such idiosyncrasy.” – Lewis R. Gordon, Existencia Africana: Understanding Africana Existential Thought

To be not fully human—which seems to also mean to be something else (other/ Other? super? sub?) and to survive—which means to be in excess (or perhaps outside) of life is a peculiarly black predicament.

Recent media coverage of the atrocities committed against black people by the State and state apparatuses in the year that marks the fiftieth anniversary of the March on Washington and the 150th anniversary of the passage of the Thirteenth Amendment draws our attention to a simple fact: black time is non-linear.

And black space “is a geography that matters because it carries with it (and on it) all sorts of historically painful social encounters and all sorts of contemporary social negotiations.” – Katherine McKittrick, Demonic Grounds: Black Women and the Cartographies of Struggle

Blackness is, thus, marked by psychogeographic proximity, comprised in the “possibility of existing in the same place in different times.” – C. Riley Snorton, Nobody is Supposed to Know: Black Sexuality on the Down Low

“in the break” – Fred Moten, In the Break: The Aesthetics of the Black Radical Tradition

Indeed, it seems, the survival of black life (and black thought) is a queer proposition.

“The political task that remains is neither a restoration nor a restitution, but a creative destruction.” – Jared Sexton, Amalgamation Schemes: Antiblackness and the Critique of Multiracialism

“I don’t want to write this down/ I wanna tell you how I feel right now” – Yasiin Bey, “Umi Says” 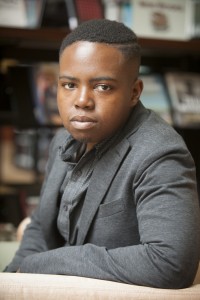 C. Riley Snorton, Ph.D. is an assistant professor in Africana studies and feminist, gender, and sexuality studies at Cornell University. Snorton’s first book, Nobody Is Supposed to Know: Black Sexuality on the Down Low (University of Minnesota Press, 2014), traces the emergence and circulation of the down low in news and popular culture.