White Terror: Spirituality, Ancestral Memory and the Politics of Remembering – The Feminist Wire

White Terror: Spirituality, Ancestral Memory and the Politics of Remembering 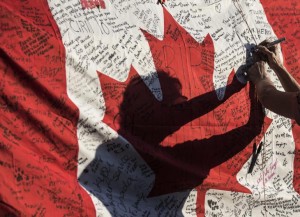 Over the last couple of weeks, I have been reflecting and analyzing the ways in which the media has taken up the shooting in Paris, France. The sentiments expressed after the shooting in Paris reflect and parallel the response to the shooting in Ottawa, Canada, particularly, Stephen Harper’s anti-terrorism speech that was filled with “Othering” remarks. Drawing from bell hooks, I reflect on what these incidents have taught me, and how we might use such historical moments—these shootings—as a moment of deep healing and connectivity to those who have tread before us.

In “Representing Whiteness in the Black Imagination,” bell hooks argues that whiteness is terror in the psyches of black individuals and the black community. Historically, white individuals constructed themselves as invisible by controlling and regulating the gaze of the black individuals. For instance, black slaves were not allowed to look at their masters or make eye contact. This process of looking/not looking produced a fantasy in which whiteness easily assumed that it is invisible to the gaze of the “other.” hooks argues for critically challenging white subjects’ positionality as a means of deconstructing and disrupting the structures of racism. Such a repositioning has the power to allow white subjects to see the ways in which their whiteness reinscribes systems of domination and oppression. I draw from bell hooks because she suggests whiteness as a form of terror for people of color. We should not be buying and participating in anti-terrorism discourse that we forget to look at the true source of oppression destruction. If we do not have a critical eye on the system of whiteness, we risk not being able to name and identify the source of anxiety in the situation: whiteness.

Much of the anti-terrorism discourse in the media reveals the instability of whiteness and the fear that emerges as it encounters the “other.” Stephen Harper’s speech, for example, was filled with images of the “other,” who is clearly manifested as a terrorist and savage. His speech included phrases such as, “We won’t let ‘them’ intimidate ‘us’.” The automatic demarcation of “we, us, and them” is poignant. We need to ask critical questions such as who are “we, us and, them?” News reports claimed that “Canada has lost its innocence” and “they have gone too far.”  Canada is constructed as an “innocent nation.” The implicit question is how could anyone do this to such a peaceful loving country?

It was not only white subjects who were horrified and outraged that such a shooting could take place in Canada but also people of color who participated in upholding this narrative of the “innocent nation.” Blinded by the myth of multiculturalism and diversity, both white and people of color alike bonded together over this horrific tragedy.

This poignant question weighs on my mind: how is that 11 lives deserved a march with world leaders, but no attention has been paid to Nigeria? How do we not see national outrage when a CNN reporter argues that black West African lives are not a priority? Or when Aboriginal women go missing every other day  in Canada? Why not at the thousands that have died collectively in Afghanistan, Iran, and Palestine? How does Canada become or remain so innocent after all of this? Why is it that a white solider and 11 others’ lives are so important? While much of the media coverage has been on the soldier that died, the attention that the shooter received has been focused on his religion, Islam, and terrorist discourse. Why is Islam inextricably linked to terrorism? Why is terrorism suggested as the only motivation behind Micheal Zehaf-Bibeau’s action? Where does his own psychological frustration figure (an explanation which is also problematic as white subjects who are violent are privy to being labeled as mentally ill)? What if it was a response to his own history of pain and violence?

Instead, the rhetoric continues to be one of racialization of Muslim bodies. I use the term racialization to refer to the ways in which signifiers of religion, language, dress codes, hair features, etc. have acquired new racial meanings and connotations. The process of racialization allows us to move away from biological conceptions of race towards looking at how the system of whiteness produces, sustains, and maintains new notions of “differences,” while simultaneously concealing its role in creating such differences. Racialization, then, allows us to comprehend how through the above signifiers Muslim bodies are consistently “othered,” and therefore subjected to exclusion in different social, political and economic contexts.

Racialization allows us to address the shooter, Bibeau. Even though he was a white subject born and raised in Canada, he becomes the “other” through his actions, religious beliefs and descriptive features of clothing, hair and complexion. The white subject is dislodged from the normalcy of whiteness. He is rejected from the system of whiteness and becomes the “racialized” other through his actions and religion. He cannot be a white subject capable of such monstrous actions; rather the system of whiteness racializes him to embody specific characteristics that reflect the “other.” The system of whiteness must remain neutral and invisible; therefore he has to be racialized into the “other” racial categories in order to make sense of his actions and this incident. He has to be marked with the signifiers of fear, danger, terror—all of which are common phrases used to describe the actions of different Muslim groups post 9/11.

The narrative consistently reproduced through history, becomes one in which the white subject, Captain Nathan Cirillo, has been endangered and killed by the “other.” What this narrative does is, erase the history of violence done by the Canadian government, both internally and externally. The history of violence in Canada is concealed in a fantasy of whiteness, which projects, sustains and contains terror onto the bodies of the racialized othered. Whiteness functions in the nation by promoting itself as civilized, free and democratic, and at the same time positions itself as the victim, who is under threat by the “other.” Whiteness, then, is able to maintain and stabilize itself by positioning itself through a civility narrative, denying its own ongoing history of violence. This fantasy of whiteness operates profoundly in blinding us to the violence that occurs on a day-to-day basis around us and the ways in which it has become institutionalized through state policies and laws. The life and death of Charlie Hebdo and Nathan Cirillo represent pieces that fit into the metaphoric puzzle of whiteness; their death causes the puzzle to break (and causes national and international outcry). In order to put the puzzle of whiteness back together the “other” must be ousted/ conquered/ and or destroyed for whiteness to remain in tact.

We are all implicated into this puzzle, I am; you are; my ancestors were, in different but similar ways. The historical roots and routes of whiteness allows me to draw parallels between the justification of violence against racialized others contemporarily who are perceived as “terrorists” and the violent practices and rationale which caused my ancestors to become indentured labourers. I am reminded of the violence done to my own Indian ancestors who were brought to the Caribbean under the indentured system by white colonial power to labour on plantations. I am reminded by hooks to keep a critical eye on the source of power and anxiety. As hooks (1992) notes an, “archeology of memory makes return possible, the journey to a place we can never call home even as we reinhabit it to make sense of present locations” (pg, 343). The act of remembering our ancestors—their pain, their sweat, blood and tears— allows us to see and understand their choices, their struggles and the violence of the slavery and indentureship that set in motion about our ability to be present within this system. The ongoing violence within our current reality cannot be seen as isolated acts of violence against racialized bodies, rather we must remember the history of those who have tread before us, who have endured and survived for our sakes and the potential of a better future.

This violence is not merely historical and state instituted. It manifests in subtle and powerful ways that are often emotionally damaging. How do I express the feelings of inadequacy when someone corrects the way I speak? When a white professor dismisses my perspective in the classroom arguing that I am playing the “race card?” When my name was listed on a “no fly list” despite being a Canadian citizen? When my body is never read or seen as a “Canadian?” Under the disguise of multiculturalism, pluralism and diversity, we cannot afford to forget our individual and collective histories that were shaped by the system of whiteness. We cannot let such a moment of tragedy prevent us from building anti-oppressive connections and solidarities. If we recognize the ways in which our histories were and continue to be shaped ongoing colonial violence, we can better address our current situations.

The past enables us to change our present, to construct our lives differently. By recognizing the ways in which we are all implicated and often complicit in the system of whiteness, we can begin to undo and heal from the violence that was done to us. We can heal from some of the inter-generational violence that has been passed down to us. In understanding this ongoing violence that is present in our lives today, we move closer to them and they also move closer to me. I heal the wounds that my ancestors could not attend to by writing my thoughts out in their name. In healing myself, I heal them. I piece together the fragments of my history that have been passed down through oral narratives, the colonial archive, and the limited literature available to become more whole. I write our collective pain and healing into existence.

I also feel deep within me that in remembering the past, bringing it into the present creates new ways for connecting. In looking directly at whiteness, my ancestors are also looking through my eyes. In crying and mourning over a sad day in Canadian history, they also cry and mourn with us. While forgetting the past and turning a blind eye to the everyday encounters of terror might be a valid option and even a coping strategy for many subjects of colors, I refuse to participate in the “othering” narrative that continues to divide and push us further apart. I refuse to devalue or value one life over another. We live, love and heal in unity. I am a part and parcel of my ancestors and you; we course through each other’s veins. This is their gift to me, and so I cannot forget. We must not forget. 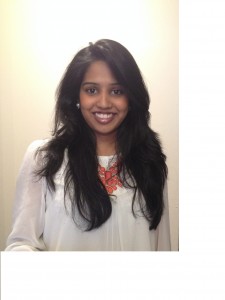 Rajanie (Preity) Kumar is a Ph.D student in the Gender, Feminist and Women’s Studies program at York University. She was born in Guyana and moved to Toronto when she was 12 years old. In her spare time, she loves coloring in books, watching Bollywood movies and pushing buttons.