On The Parliament Hill Shooting, Canadian Moral Panic, and Lack of Tenderness – The Feminist Wire

On The Parliament Hill Shooting, Canadian Moral Panic, and Lack of Tenderness 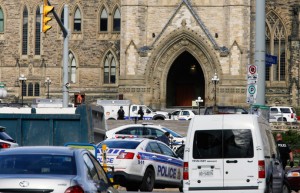 For those residing in the downtown core of Ottawa like myself, the fear has not yet subsided. By now many worldwide have heard about the October 22 shootings on Parliament Hill in Canada. I have witnessed the collective fear and uncertainty slowly evolve into moral panic. More specifically, I speak of panic that has led to some very racist depictions in the media, over social media, and in public domains, mostly riddled with undertones of Islamaphobia and anti- Indigenous sentiments. This oversimplified sanitized narrative  presented in the media is dangerous; it fuels more insidious radicalized violence, and increases already evasive security measures under the guise of national security.

Suddenly the “go back home” comments return (as if they ever really disappeared), the policing of which citizens are not loyal and thus not patriotic ensues, and many Canadians experience temporary amnesia, forgetting their ancestors arrived on this land from other places too. Anyone who poses critical analysis (typically anti- racist POC and allies) are deemed the ‘ungrateful Canadian’, their bodies set up in opposition with the ‘model citizen’ who is appreciative of our heroic veterans and the brave men and women currently fighting on our behalf. As if the two are not compatible and must always be in competition with one another. Lately, you cannot simultaneously love this country, ‘the Great White North’ and be critical of it during these moments when our state is vulnerable and under attack. If you do, you are told, “How dare you.” You risk becoming the Dixie Chicks of Canada.

As Canadian citizens, as settlers of lands that originally do not belong to us, I wish as a nation we could be more nuanced and tender with each other during these trying times. Yes the life of a fallen soldier is absolutely positively disheartening. Cpl Nathan Cirillo, the officer who lost his life on Wednesday was somebody’s son, a father, a husband, and a friend. Like many of us, he was many things to many people. We can all agree that he was taken too soon, entirely too young, and that he died standing guard for his nation. He should have never died a senseless death at the National War Memorial. However, his death shouldn’t mean that we inflict more unnecessary violence to each other, nor should we forget that our country was built on a very violent colonial legacy, one that still thrives today.

Instead of the sharing more of the life story and celebration of the fallen soldier, narratives quickly focus on the shooter. Much of the dialogue reflects deep resentments. Before the shooter was identified, it was alleged that he was dark- haired Muslim man, a terrorist. Upon discovering that he was actually a White man born and raised in Québec, the language shifts towards criminality, our Prime Minister even calling him a ‘radicalized Canadian.’ In this case, the media narrative didn’t immediately shift to the default–When a white man commits an awful act of violence, the explanation offered is often some form of mental health instability (because white men aren’t typically inherently violent according to mainstream media). But wait, not so quick, eventually the media discovers that Michael Bibeau, the shooter, had converted to Islam and now we’re back to terrorist rhetoric. Cue our Prime Minister now more comfortable with using the term ‘savage,’ and Bibeau is back to embodying the ‘radicalized other.’

Now, anyone who is cautious of such depictions and knows the consequences of such language to communities who practice Islam is called out for not being patriotic when they voice their concerns.

When we love our family members are we limited from providing critical analysis on how they can do better? When folks parent children  do they never let them know of when they do things that are wrong? Why do we understand that it is okay to provide constructive critical feedback to others and simultaneously still love them, but buy into the binaries that tell us that patriotic citizens cannot be critical when it comes to the military and the state?

For many Canadian, their bodies have always posed a threat to the state and thus have always already been under attack. Our nation was literally, not figuratively, built on violence. Communities who were initially here have been rendered invisible. Violence has been supported, protected, and allowed to thrive through systemic and institutional practices, laws and state policy. We cannot be selective and forget this when the state is perceived as wounded victim. Our government permits acts of violence that lead to causalities both here on Canadian soil and globally. We cannot forget these facts during these times. And, we cannot persecute others for raising these facts. We cannot buy into oversimplified narratives in the media pushing us into paranoia. The fear- mongering (of threats both real or imagined) has got to stop because lives are at stake.

I am taken by the value we place on some lives and complete lack of acknowledgement and devaluation of others. There is selective empathy at work. As someone studying solidarity building across differences, I desperately desire the collective rage I am witnessing to be shared during all acts of violence against humanity. Why the collective silence on some issues and outright outrage over others? How do we as a society begin shifting our understanding of who matters and who doesn’t? Does it take us all suiting up, joining the military, and serving our nation and its citizens to make the masses comprehend all lives are valuable?

What about those who were triggered in so many ways from the events that unfolded in Ottawa? Not enough media outlets are sharing where folks can go for support and resources. How do parents and those who parent explain such events to their children without perpetuating racist, xenophobic, Islamaphobic rhetoric? How do we better plan for lockdown procedures so those that are pregnant and expecting, those differently- abled and folks generally with various needs and restrictions are thought of during planning for these moments? What about the racialized men who fit the description of the shooter? The girls and women who choose to wear scarves, hijabs and burqua’s who inevitably will get the collective side-eye from the public who now feels empowered and entitled to do so? What about the young white woman murdered the very next day in Québec who got less media attention? Does her life matter? And if so, where does she fall on the spectrum of those we give value to? There are so many pieces that are being left out of the media and we need to be cautious.

I am not saying that threats to the nation are not real. Nor do I want to presume that men and women in the military are not valuable. Indeed, they are. To many, they are heroes who risk their lives. They have been and continue to be members of our families. But I can also yearn for a time when we are also acknowledging that all lives matter. That trans* women matter. That  violence against children, girls and women is not okay and also deserves outrage.That Indigenous/ First Nations/ Aboriginal/ Métis women matter. What would it be like to live in a world where officers in uniform aware of their amplified risk  after Wednesday’s attack, where officials were the targets, connect their vulnerability to black men who are also hyper aware of their black skin, when so many are being gunned down by police officers? How beautiful to not silence folks for feeling passionate about all lives, who like so many military families in collective mourning, know the pain of losing someone in their community?

I continue to watch my Facebook timeline and the news. The comments, the posts, the likes, acts of solidarity unfold all around me. Images of the maple leaf, the Canadian flag, of Parliament fill me with pride. I am proud to be Canadian. And yet there is also a sense of disappointment and overwhelming sadness that washes over me. I hope this tragedy makes us all more aware of how connected we are as human beings. Do we finally understand that a struggle anywhere is a struggle here, that we are all implicated? I doubt it, but I am hopeful.

I hope we are all invested in doing better for each other. That we are all infuriated by what is happening in the world around us. I hope that more lives matter to us as a collective. That we no longer place more or less value on human beings. May we all never lose our will to feel compassion in any situation. And may we avoid dangerous binaries that silence voices for being critical assuming they aren’t compassionate. May we stop surveying folks for how they should feel during tragedies of any sort. And finally can we stop the investment in systems of domination and more in each other? So many people across the nation are recognizing their privilege and appreciating their safety and the men and women that keep them safe. But there are also those who wake up each and every day who do not have such privileges, who will never be protected by those paid to serve and protect. It is time for more tenderness for each other during these times of heightened fear. 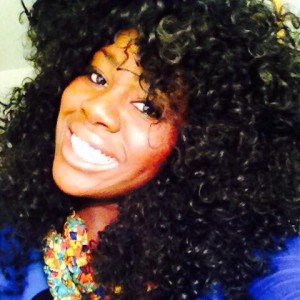 Dorothy Attakora is a PhD student at the Institute of Feminist and Gender Studies at the University of Ottawa in Canada.