Killing Me Softly: On the Power of “No” – The Feminist Wire

Home / Feminism / Killing Me Softly: On the Power of “No”

Killing Me Softly: On the Power of “No”

When it comes to sex, “no means no” has entered into mainstream thought as a concept; hopefully, in a much more effective way than the last big no-should-be-enough campaign. That one just led to a lot of kids seeing Nancy Reagan’s face in their weed the first time they smoked pot. But what about the smaller nos in the lives of women, and the consequences to us when we demur?

It was recently my birthday, and I typed the following to a man online who quickly made things personal when I declined to give him my address so he could send me a present: I’m tired of making concessions to things that make me uncomfortable. I’m keenly aware as I write this that there will be people who think this is a pointless topic. It’s just an annoying fact of life, they will say, sometimes you say yes when you really want to say no. Often, it’s a feelings-saving gesture or societal politesse. But there’s more to it than that. Sometimes, when no meets the male ego, the result is like the chemical reaction of combustibles. In the state where I live, a young girl was stabbed to death for saying no to a boy who asked her to the prom.

So far, I’ve been lucky— I’ve only received emotional jabs not physical stabs as a result of my small nos. These jabs were mostly the ends of what I thought were real friendships with men. My mother’s voice echoes through my head as I write this: “Well dear, those men were never your real friends anyway,” and she would be right, of course. But underneath what we’ve collectively been dismissing as “suck it up, move on” non-events lies a sentiment that should be acknowledged.

Two years ago, I became friends with another writer on Facebook. Actually, seeing what I could of his profile at the time, I didn’t even know he was a writer. We had mutual Facebook friends, including a female writer who is one of my heroes, and I used to see his posts on her page. From his profile picture, I saw that he chose to show himself to the world as a kitschy goofball. For example, in the picture he was wearing over-sized clown glasses and a giant purple sombrero. In his little “About Me” area, I read that he had played in a band with a musician I really liked, so I sent him a friend request. Just another friend request, based on what I imagined to be our similar interests. He accepted and began messaging me. Soon, he sent me a book he had a story in with a cute inscription. I liked messaging with him. He wanted me to come to the city where he lived so we could meet, but I wasn’t in any big hurry. I figured I’d probably run into him at a show or a reading someday. He kept asking me to call him on the phone, which was kind of annoying, but eventually I did, the first small yes when I would have preferred to say no.

Then, one weekend I was in his city and agreed to meet him at a restaurant. It wasn’t a date. It was an I’m going to be near where you live, let’s hang. I was staying at a friend’s apartment, and after so many shots at the bar, I decided it was time for me to go. As I was putting on my coat, he asked me if I wanted to go back to his apartment. With no set agenda for anything to do once we got there, the implication was pretty clear: Did I want to go back to his place and engage in sexual activity? No, I didn’t, but I didn’t say that. Instead, I went out of my way to stress how early I had to get up the next day. It’s not you, it’s me, I went out of my way to imply. Don’t think you’re less of a stud. No. Think I’m a lightweight.

The next morning, trying to be preemptive and stay a step ahead of any rejection-related weirdness he might have felt, I sent him a message asking if he wanted to get coffee before I went home. He typed back that he didn’t, and that was it, effective immediately, our friendship was over. While we are still connected via Facebook, we do not communicate with each other at all anymore. He doesn’t even say Happy Birthday, when everyone and their thrice removed cousin comes out of the woodwork on that site with an annual greeting. And there’s my mother’s voice again—and she’s starting to get impatient: “Well, dear, he was never really your friend.”

We aren’t even supposed to ruminate on the endings of these “relationships.” Nobody wants to hear it. It’s just the way things go. We don’t talk about the implication when a woman rejects a man, no matter how gently, and this is how he reacts. As a society, we will discuss it only if his reaction is big—if it has a body count, but not if his reaction is bloodless. It is acceptable if he kills me in his mind, but not acceptable if he actually kills me.

I’ve watched about five minutes of Elliot Rodger’s videos—it took me this long to finally sit down and force myself to do so—and I can tell, after watching just those five minutes, why women rejected him. Rodger’s absolutely alienating, abrasive sense of entitlement: it drips from him. He doesn’t even come across as human, but as a preening, posing set of entitlements and needs. Some kind of bitchy, alien anger baby. And he’s not bad looking. He’s well dressed and groomed. Some women like fancy cars, and he had one of those. But you can see there is a disconnect. He is a person who has grown up to believe, just by the nature of his gender, that he is owed what he wants, and to not get what he believed he was entitled to enraged him. He believed it was nothing less than an act of war to deny him what he felt was his birthright.

I felt bad about rejecting my new “friend.” I feel bad when I reject anyone. I’ve offered up convoluted excuses and complicated fabrications where an “I’m not interested” should have sufficed. And there have been times, depending on the man, where I’ve felt the need to tread as softly as possible when giving my small no, aware that there might be some kind of consequence. That my small no might not be the end of it. With the constant gains of technology, these consequences have become more nefarious. I have deleted men on Facebook and crossed my fingers that that would be the end of it. When I told the man I would not give him my address so he could send me “my gift,” he decided to give me what I’m sure in his mind was another kind of gift. He told me (in so many words) that I was rude, damaged, and obviously had trust issues that I needed to work on.

This isn’t a polemic on empathy. I believe that the empathetic no is most women’s default no, because somewhere along the lines we internalized it not just as politesse, but as a survival tactic. Sometime in our lives, we either learned or observed that it was better to be careful with our small nos. That some men might react to them as if they were being attacked with a real weapon.

It is interesting to think, and not much of a leap, that if rape is about power, that it’s predicated on the notion that our no is a weapon. Our freedom to choose, to decline, to demur, is seen by some as a power that we wield, and sexual assault is a way for men to take our power to say no away from us.

I chose the anecdote about my writer friend as an example because his “soft” killing of me stung a bit more than other times I have been killed in the minds of men over the past few years. I had hoped that he had taken me seriously as a peer, and the way our relationship ended proved that he had not. In my life, I haven’t had that many experiences where I slept with a man, then never heard from him again. That’s the stereotype: The woman wanting the emotional connection, and the man only being interested in the physical one. I have lost more relationships with men before we even got to that stage. I have lost more relationships with men because early on, I merely said no to them in some small way. 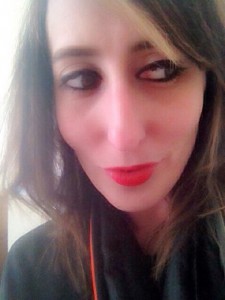 Fiona Helmsley is a writer of creative non-fiction and poetry. Her writing can be found in various anthologies including Ladyland and The Best Sex Writing 2015 and online at websites like The Weeklings, Jezebel, Junk Lit, The Hairpin and The Rumpus. Her book of essays, stories, and poems, My Body Would be the Kindest of Strangers, is forthcoming in 2015.