“I was overwhelmed by the thought of having to be a black girl for the rest of my life.” –Khadijah Costley White, The Washington Post

………….slicing a people in halves, more

………….chopping up a neighborhood

to build highways and forget,

where the lip drops on a canvas

…………..then cutting away what rests

beyond the glass, and insisting

It erases all the known small faces

… ………then denies where sons began.

This ugly says be strong and silent,

…………..only to slap the deserving and reason

how she can handle anything.

I mince downstairs with tender ankle and sore foot,

and lean into a railing with weight a lover never

held. There is no easy sweep that foretells what

I count inhalations as I deliberately deposit weight

on each foot. Underneath, a house’s foundation

gradually crumbles. The water may be poisoned

beyond redemption. It runs, wears away rock,

my bag with paperbacks and hardcover spines

by poets and preachers, like I did that morning

when a man sat in a dust-beaten truck listening

to the pundit yelling about university students

are open and his radio blares. I silently admit

truth. I have done all those transgressions, part

of a list longer than this diatribe or James Cone’s

tome in my heavy book bag. He pulls off without

looking at me. I lift my bag’s strap, bring it closer

while I walk to the bus stop. We head to different

destinations. Both of us will eventually become

dust, but prophecy calls, insists the future will

fragment the myth that he listens to and expects.

The leaning tree shudders with thousands

lazily through branches, shine through

chandelier of an upside down colander

punched through with light. The mother

with La Brea tresses stands on the deck.

illumination up along her arms. Her voice

rolls with a smoky friction. Her daughter

springs effervescent as the peeling back

of citrus skin. Her voice is a small, bright

handful of sequins that match a bird’s chirp.

in the tree near you, mom. No one is startled.

It is too much to tell the daughter. Spiders

dance played in the anglings of eight limbs,

to attach to whatever dexterity allows to anchor.

The daughter could learn the threadbare tale where

the woman, too boastful of her craft at the loom,

transforms under the thumb of a god into bud

of thorax and skittering bundle of legs. Her cloth

flies but too weak to last throughout decades.

Anyone who sweeps corners and ceilings knows.

to tribes of arachnid descendants who carry 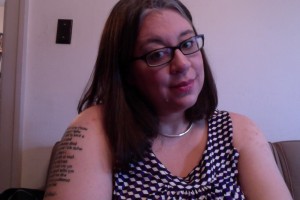 Tara Betts is the author of Arc & Hue and the chapbook/libretto THE GREATEST!: An Homage to Muhammad Ali. Tara recently received her Ph.D. in English/Creative Writing at Binghamton University. Her poems has appeared in numerous journals and anthologies, including POETRY, Ninth Letter, Crab Orchard Review,Gathering Ground, Bum Rush the Page, Villanelles, both Spoken Word Revolution anthologies, The Break Beat Poets and GHOST FISHING: An Eco-Justice Poetry Anthology. She recently completed the manuscript for her second poetry collection “Break the Habit” and is working on other projects.