COLLEGE FEMINISMS: When She Breaks Your Heart: A Collection of Poems – The Feminist Wire

Home / Bodies / COLLEGE FEMINISMS: When She Breaks Your Heart: A Collection of Poems

COLLEGE FEMINISMS: When She Breaks Your Heart: A Collection of Poems

when you were fifteen

turning away from his embrace

When you have a bleeding in your brain

from trying too damn hard to be brave

Lie down and watch the structure of what you thought

would be home in your heart forever

splinter and collapse like it was made of paper

If goodbyes are traitors to memories

prisoners of war kneeled in a row

a gun missing a few rounds but still loaded

aimed at was once your strength

Fear is wishing you were tied to the pain

because feeling will always be better than floating

like no one remembers who you used to be

When left each other heavy with the weight

of every nightmare coming true

and I knew that fear would always find me

when I think of you

Diamonds in my palms and knees

a sharpness I was pushed into

blood money folded up in your pocket

you’ll buy yourself something new

Bells ring when you walk out the door

and ring when the wind walks in

Despite myself I have been reduced to pulp and rind

Your scent clings in the creases of my fingers

and the underside of my pillows

lightening me up in your after-glow

I can feel you between my ribs

close to the center of the earth

there’s a place that still remembers you

We burn the same there

and I think I have sucked

enough of you in 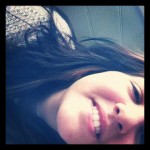 Ray Fraizer is a writer currently attending the University of California, Davis as a Women and Gender Studies major. Reading is her first love, and writing is a close second. She hopes to eventually contribute published works to the queer literature genre.