By Guest Contributor on February 2, 2015

His picture was not to go unnoticed. It was planned that way. Flyers showing his face were posted prominently; one was under the clock in the changing room, another on the window of the storefront facing a busy street. In the photograph he is wearing— conveniently enough—a beanie that could double as a ski mask and a prison-striped shirt. He looks warily out of the corner of his eyes. Underneath his photo was a caption with the words “Safety Alert” underlined and bolded.

Several white women stopped to study his image and to read a brief recounting of his crimes before heading into the studio. This young black man had come to be known as the “Yoga Thief.” We were all to be on guard.

A couple of the women, the newcomers, turned and sized me up as I put my mat down. The small studio room was near capacity. Filling the space were women—only women—ranging in age from the early 20s to the late 60s. I was the only black woman present.

We began our practice, ironically, with the Lokah invocation:

May all beings everywhere be happy and free and may the thoughts, words and actions of my own life contribute in some way to that happiness and to that freedom for all.

After class, I took a picture of the man we were told to fear and ostracize in the midst of cultivating happiness and freedom for all.

The black male “yoga thief” had reportedly stolen personal items such as purses and wallets from several San Francisco Bay area yoga studios. According to an account I received from one studio owner, he had been arrested and convicted for petty larceny. (It is difficult to find a clear account of this case, as the studio owners themselves were uncertain as to the details. I reached out to the Sergeant in charge of the case, but as of this writing, she has not returned my phone call.) His time having been served, his recent release from prison had galvanized a collective of approximately 15 owners and managers from top yoga studios in Berkeley and Oakland, including Namaste, Flying Yoga, Yoga Kula, and Core Power, among others. 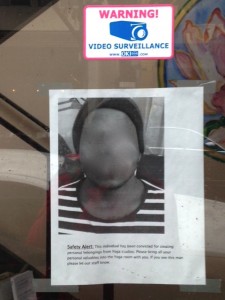 The objective of this yogic super-group was simple: To keep the “yoga thief” out. This being their end, their means quickly became dubious. They organized a listserv, the messages on which were almost entirely devoted to his sightings.

Email exchanges such as this poured forth:

The yoga thief was spotted today at ­­­­­_______ Cafe in the afternoon, likely with intentions of visiting the Annex later on (since we’re right next door). Luckily, one of our Studio Coordinators ________ recognized him from the photo that has been circulated. We’re notifying our staff, and _______ asked me to reach out to all of you so that you’ll know to stay alert. I’ve copied _______ note below. Feel free to reach out if you have any questions.

I recognized him right away, and pulled up the e-mail chain with his photo to verify it was for sure him. Because I was startled, my gaze was intense to say the least. I think it scared him off, because after I stepped outside to figure out what to do, he left the cafe, walked past the Annex, and down 42nd street.

He’s back, let’s be alert! I’m feeling lucky to have crossed paths with him, because now we know he’s around and could be up to his old tricks.

The incongruity between their sense of shared victimization, and the fervor with which they clocked, chronicled, and surveilled this man, was laid bare in these messages. If there was any firm evidence that he had committed additional crimes since his release, this didn’t make its way into the emails. Fear-mongering, however, did. For alongside the fitting wish for “Harmony” for those apparently identified within the yoga community was the clarion call to “be alert!” and keep an eye on the man who had been determined to exist decidedly outside of it.

This man could be “up to his old tricks” spoke volumes about the lack of solid proof that the “yoga thief” had in fact returned to vandalizing studios. We do know, however, that he was subjected to stares, and arguably even harassment, by those in the yoga community when he was simply spotted at a café.

“I’ve been struggling with the disconnect, ignorance, in the yoga community for the past couple of years,” Shroff wrote me in an email. Reflecting on the seeming never-ending stream of information about the black “yoga thief” on the owners and managers listserv, Shroff added, “I wonder if there are people who are also saying ‘I cant breath[e]’ and ‘black lives matter,’” participating in the message stream. “It has become cool to chant slogans and look like you care, but still such a disconnect between that and one’s personal actions and deeply ingrained thoughts.” He composed an email to this effect that he circulated on the listserv.

Indeed, the coalition of yoga studio personnel came together sometime in the early fall. The messages and flyers were circulated at the same time as the “Black Lives Matter” social movement was growing in the Bay Area, and nationwide. And it is not for nothing that the alleged police rationale for the profiling, harassment, and ultimately the murder of Michael Brown and Eric Garner was that they had allegedly engaged in similarly small crimes of selling loose cigarettes and shoplifting. Across the cases, the petty theft of property by a black man surfaces as the underlying justification for his perpetual harassment, dehumanization, and criminalization. It is the typical U.S. politics of valuing property over humanity.

His ongoing criminalization was a concern for Chris Hoskins, owner of Studio Yoga 6 in Berkeley. Hoskins stated, “It’s very personal to me because I’m a black male.” He added, “If he’s not currently a suspect or wanted by the police, why is his picture up? I think it’s bull.”[1]

Yoga studio profiling has ramifications for people beyond just the so-called “yoga thief.” For while only one man’s face graces the flyers, the traffic in such images trigger stereotypes of “black people as criminals.” This makes all black people suspect.

Hoskins wondered if the average (white) person coming to one of these studios would be savvy enough to recognize the black “yoga thief,” or if in their recollection the images would simply fade to black. It seems his concerns were not unfounded, as another post on the listserv confirmed:

After emailing last night, I was notified that the person in question was arrested last night outside of Core Power. By the sound of it I’m guessing he won’t be around for a while. Sad & unfortunate all around, but glad to not have to worry about this anymore. 🙁

This message was quickly followed with the note below:

More than contributing to cases of mistaken identity, the racial profiling encouraged by these practices could further deter people of color from coming to yoga studios. Several articles in the recent past have lamented the “whiteness” of the yoga studio space, and many studios have responded by engaging in outreach or offering yoga in non-traditional spaces and underserved communities.[2]  For many, the stated goal is inclusion, forgiveness, and liberation, but practices such as those surrounding the “yoga thief” contribute to exclusion and Othering.

It is important to note that the racial profiling of a black “yoga thief” is not specific to the San Francisco Bay area. New York apparently also had a black male “yoga thief.” Studios in New York, including Yoga Vida, Yoga Union, and The Shala, also organized a listserv to chronicle their yoga thief’s whereabouts. He was described as “tall, burly, black, and polite.” One interviewee asserted, “This guy’s probably a low-level drug dealer who cased the studios in advance.”[3]

But in the Bay area, the current response of putting up fliers and disseminating messages of the whereabouts of a black man—of whom we have yet to receive evidence of new crimes since his release—is a form of profiling that feeds on and perpetuates the fear and criminalization of black people, and especially black men. The anxiety surrounding black yoga thieves almost rises to the specter of an urban legend. Like the “black male rapist” of yoga, black yoga thieves inspire white people to organize to combat criminal threats to whiteness and its attendant property.

I am not, of course, suggesting that people should lift things from yoga studios with impunity. The question in this case is what is the right response. When there is evidence of a crime, how do we respond in a way that doesn’t contribute to the fear-mongering and racial profiling that would further deter people of color from entering the yoga studio space? Having a front-desk person, or encouraging people to take their valuables with them into the studio, are among the options. Whatever the approach, it should be in line with the aim of “union” that many yoga studios teach as central to a yogic practice.

[1] It was not lost on Hoskins or Shroff that this man’s petty thefts perpetrated against the moneyed elite were being used to condemn and surveil him post-release, while the same time white people who commit much more serious crimes face lesser scrutiny. This much has been chronicled #CrimingWhileWhite Twitter feed, where thousands of white people have attested to crimes ranging from getting away with a felony hit-and-run, to assaulting an officer of the law. In their own accounts, most have walked away scott-free, without facing any consequences, much less prison time. The reality of the racial disparity in punishment for crimes throws the organized offensive against the potential thefts of the black yoga thief into stark relief. 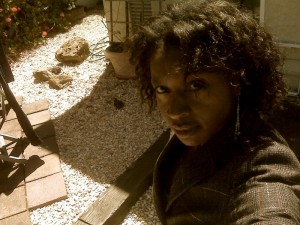 Sabrina Strings, Ph.D. is a Sociologist and a 200hr CYT. Her research examines how race, gender, and class are inscribed on the body, such that the body itself can be marshaled to maintain social hierarchies. Her articles and essays are featured in venues including Signs: Journal of Women in Culture and Society (forthcoming), Feminist Media Studies, and The Feminist Wire. Sabrina is the director of the upcoming Richmond Yoga Project, which will offer free yoga therapy to adults living in the predominately African American community of Richmond, CA. She is also a co-facilitator of the Race and Yoga Working Group at UC Berkeley, which hosts an annual conference on issues surrounding the inclusivity of the yoga community. Sabrina is the co-founding editor of the forthcoming journal Race and Yoga. For more information, please visit raceandyoga.com.