COLLEGE FEMINISMS: The Cops Can’t Come Here: How A Predominantly White Institution Is My Safe Haven – The Feminist Wire

COLLEGE FEMINISMS: The Cops Can’t Come Here: How A Predominantly White Institution Is My Safe Haven

Preface:  I started this piece before Mike Brown. Before we were protesting for our rights. I started this one day after running late to work because a cop thought I looked suspicious as I waited for the bus. I started this when I had to sit in a room and comfort a Black boy when his statement “fuck the police” was greeted by whiteness yelling “not all cops.” I started this the day I realized how unsafe my body is walking in my own neighbor and I was forced to find shelter in a six-block radius also known as Macalester College.

As a Black, working-class queer my liberal arts college filled with white, upper-middle class liberals is not an easy place. During my freshmen year I listened to students pathologize Black men. In a moment of immense pain, I looked to my professor to say or do something but she stood silently by in the name of “academic growth.” It was this moment where I began to normalize the violence of whiteness. A violence that often produces situations on campus where I am silenced, oppressed, or dismissed. In my four years, despite being an active student leader, I was assumed to be a misplaced community member, a passerby, but never a student. However, to my and many others’ surprise as Black people are being shot where they stand, I feel the safest on this six-block campus.

Considering my college a safe haven comes from my awareness that, as a Black, genderqueer person, I am often read as a Black man by police. Therefore, the biggest threat to my body is state violence enacted through bodily harm at the hands of cops. I tend to avoid spaces where cops exist. I see this as simply increasing my life chances. I have also come to realize my college does not take too kindly to cops roaming the private landscape on which it stands.

I never noticed the lack of police on my campus until one Sunday afternoon the cops on horses were strolling around the quad. After the horse defecated, I promptly texted our Dean of Students writing “The cops and their horses are pooping on campus.” He responded asking why the cops were on our campus, and I made a quick joke telling him “If this campus has become so dangerous that we need mounted police I might need a refund.”  Within minutes the cops were gone. While the campus is “open,” it is still private property, and the cops cannot just roam around private property.

After talking to my friends, I further realized what a beautiful thing it is to have a place where cops can’t go. Our college does have security services with maybe ten or so guards, all of who will strike up a conversation on their rounds. And at the very least they say “Hi” if you make eye contact. They are non-threatening and I feel that my safety, even as a Black person, is actually their main priority.

Just a few highway exits down I-94 resides one of the community colleges in Minneapolis. Their student body is roughly sixty percent people of color. There is a large police presence. Black bodies on that campus are consistently monitored and disciplined by the cops, who casually stand with their hands on their guns and wear smirks that say “Try something, I dare you.” This state-run institution has become another site of state-sanctioned violence through the policing of Black and Brown bodies. Education is a prison here. While the violence in classrooms with white students may be similar, the police presence and activity at the community college is vastly different; it is the perpetual continuation of the school to prison pipeline for some bodies. However, I am protected from the police because of the privatization of my education and the shield of a white institution.

The tuition of my college is nearly $60,000 a year and I am aware that my place on this campus is a privilege. However, my student status carries more than educational access and support—I feel protected from the state. Not only is our campus police-free, it also helps me ward off police when I am not on campus. I am quick to pull out my student ID in addition to my state ID when cops ask for identification. In these instances, the viewing of my college ID immediately changes the interaction with the police. They hand my IDs over, apologize, and give praise for my attendance at such a good school.

I know I am searching my humanity through an institution that was not built for me. My diploma is not meant to be bulletproof, but the process of earning it has shielded my body. A college ID should be for discounts at coffee shops, not a pass that gives a cop permission to remove his hand from his gun when he addresses you.

Despite all of my struggles as a Black student on my campus, I am afraid to leave because I know that I will never feel safe in any other public place the way I do sitting in the library. I won’t worry if my ID is on my desk instead of in my wallet. My wrists can move without fear of handcuffs. I will not become a body lying on the ground. All simply because the cops can’t come here. 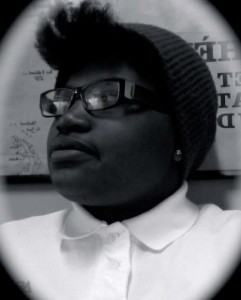 ray(nise) cange* comes from the beaches of New Jersey, the books on the intersection of Snelling and Grand, and poverty masked by love. They are a student of American Studies and Women’s, Gender, Sexuality Studies, a product of the teachings of intellectuals; they are the embodiment of intersectional feminist teachings written by Audre Lorde, bell hooks, and Gloria Anzaldúa. They carry a perspective charted by unexpected intersections; my working-class first generation American spirit met with the whiteness and wealth of a liberal arts campus.