Personal is Political: Post-Abortion Mental Health Is a Feminist Issue – The Feminist Wire

Personal is Political: Post-Abortion Mental Health Is a Feminist Issue 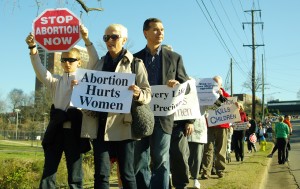 I’m stuck in that nightmare again. I walk past the picketers, with their signs showing the mangled bodies of late-term fetuses. They yell at me. One sign reads, “I speak for those who can’t speak for themselves.” The person holding it screams, “Don’t kill me, Mommy!” into my ear.

My partner tells me to take a deep breath and keep walking. I’m shaking. I want to tell them why I’m there: pregnancy complications that have left me between a rock and a hard place.

I’m on what feels like an assembly-line inside the clinic, surrounded by a group of women and girls being herded from one room to the next. Undress here, get your ultrasound there, sign your papers over that way. There’s a silent sisterhood, an understanding, between us. We talk a little.

The youngest of us looks like she’s about fourteen. She’s crying because she wants her mom to be with her when it happens. The oldest of us says she did this once before and promises the teenager that it’s not that bad. They sedate you, she says, so you probably won’t even remember it.

I sign the consent forms with shaking hands. Yes, I’m sure. No, no one is pressuring me.

The doctors and nurses look irritated that I declined the sedative. I didn’t have much choice. I was already four dollars short of affording the “discount” procedure, and had to find the difference by digging under my car seats for loose change. Two hundred dollars extra for sedation wasn’t something I could manage.

They tell me to lie back and say it’s no worse than a pap smear. I believe them only for a moment before it feels like someone is stabbing my womb with a hot knife. My ears are ringing lividly and my vision is strobing. I can’t breathe. I feel like a trapped animal being eaten alive. This isn’t an abortion clinic, I think. They lied to me. They tricked me. They’re killing me. It hurts. Oh, God, it hurts.

“BE STILL!” the doctor screams, but I can barely hear her over the ringing in my ears and the sound of my heartbeat. The nurses are holding down my arms and legs. I tell them to stop. I tell them that they’re killing me. I tell them that something is wrong—very, very wrong, because it’s not supposed to hurt like this. I’m trying not to move or scream but my body is rebelling violently. I’m about to lose consciousness. Maybe I’m about to die.

At once, the ringing stops and the nurses let go of me.

The doctor gradually comes back into focus. She looks flippant and casual and remarks, “The local anesthetic doesn’t work for everyone.”

“You need to stop crying,” she says, “Anyway, why are you crying now? It’s over.”

Those last two words—it’s over—always shake me awake. It’s been two years, but I have never been able to un-hear them. They echo in my ears as I shoot up in bed, nauseated and panicked and drenched in sweat. I shake violently, scrambling to open a bottle of Klonopin and struggle to swallow the tablet against my sobs.

This happens to me two or three times a week.

Four months after my abortion, my doctor diagnosed me with post-traumatic stress disorder. She said my symptoms were classic: nightmares, panic attacks, flashbacks. PTSD can affect anyone and can have almost any trigger. For some, it’s abuse. For others, war. For me, it was an abortion.

I am part of the hidden epidemic of women suffering from post-abortion trauma. Many of my fellow pro-choice activists, despite their good intentions, say that my experience isn’t real, or is so rare that it doesn’t ultimately matter. People seeking to ban or restrict abortion access, on the other hand, say that my experience is a reason to deny women the right to choose.

Both of them are wrong.

When my symptoms, dubbed “post-abortion syndrome” by anti-choice activists, are brought up in feminist circles, the reaction is usually—and understandably—annoyance. Post-abortion mental health problems are hugely exaggerated by anti-choicers, who tend to peddle completely false information to vulnerable girls and women seeking help. In their “crisis pregnancy centers,” which are anti-choice institutions thinly veiled as charities, they tell women that abortions are horrible and traumatizing. They even warn that having an abortion might cause you to commit suicide—a problem that they say must be a consequence of guilt and shame.  They say that your only hope for saving your mental health is to have the baby. Of course, they gloss over the fact that giving birth to an unwanted child is also a tremendous mental health risk. They twist the facts and statistics to fit their agenda and hide the actual evidence.

Like postpartum depression, this is a crisis for women’s mental health, and it’s our duty as feminists to address it.

I’m sure we would all love to live in a world where abortion has no major emotional consequences—and, ideally, we may one day get there, but only if we’re willing to look at the situation and address its causes. Not surprisingly, the biggest risk factor is pre-existing mental illness. If you have a history of depression or anxiety, your odds of having serious emotional problems after an abortion are very high—as are your odds of having serious emotional problems if you carry the pregnancy to term. One leading hypothesis suggests that this is because mentally ill women are more likely to be victims of poverty and abuse, two other major risk factors for post-abortion depression. A woman pressured into abortion because of poverty, ableism, or an abusive partner will naturally have a harder time coping with the aftermath than a woman who makes her decision without detrimental outside influences.

Naturally, women who terminate planned pregnancies are among the most likely to experience mental health problems afterward. Since these situations usually involve major life stresses—including a serious illness affecting the woman, fetus, or both—they have the same repercussions as other kinds of pregnancy loss, such as miscarriage and stillbirth. But, unlike women who have suffered miscarriage and stillbirth, women who have undergone abortions for these reasons find very few sympathetic resources. Dozens of Christian “charities” offer post-abortion counseling urging women like me to repent, find Jesus, and to turn away from our “sinful” ways. Almost no one is there to offer us emotional support without judgment or condemnation.

It’s our duty as feminists to keep abortion legal and safe—and safe means that we need to address the underlying problems that are causing women to experience mental health crises after abortion. We need to address every layer of this hidden epidemic, from the economic conditions that lead women to “discount” abortions without sedation, to the abusive environments that pressure women into abortions they don’t want, to the culture of shame that prevents us from sharing our stories and seeking help.

We need post-abortion checkups that include a thorough evaluation for depression and referrals for counseling and medication when appropriate. We need clinicians who are trained to behave sensitively and compassionately with each and every patient they have. Above all, we need universal access to safe and effective contraception, so that unwanted pregnancies and their fallout become rare. And when, despite these resources, we do experience abortion trauma, we need to be able to speak up. We need our voices to be heard. It’s time to end the silence. 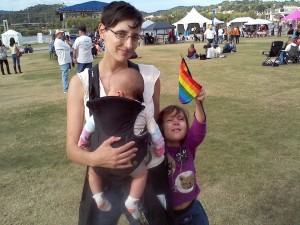 When Genevra Reid, isn’t busy smashing the patriarchy and raising her two awesome activist kids, she enjoys writing about many topics ranging from women’s health to disability activism. She lives in the Southeast with her spouse, kids, and four crazy pets.