Water stilled is not a dying sound

One bee clambers into a rose, then another—together they bump and buzz the bloom heavy with pollen and pollen collectors. Legs swollen sacks of sweet. I lumber their shape against my tongue, all desire in my bumble body. Under the sun’s eye, I am a shadow that smells like tidal river—mud and decay—cast on granite, my arms thin and featherless, while a kingfisher dives into the river, swallows a fish, leaps back to its branch, shakes out its feathers and cries.

Like this surge in my limbs at the osprey’s flight and the crow’s pursuit out of the woods of turkey and turkey buzzard. Like memory: bald scavenger watching a seagull’s easy dip into water to suck down a crab. The turkey buzzard stared and stared but would not go near, would not touch the water. Did it long? And for what? Its unblinking eyes a language we could not decipher despite our minds’ fanatical translations. It demanded our attention and we gave.

I swim in morning’s

light. I long for your face

waking in its waves.

I want to believe the smell of rosemary is wisdom and I possess a rigorous mind, but I am bumbling against the bloom of day as the river carries geese down the current. At the end of spring we watched three goslings hop out of a parent’s wing, peck at the grass, paddle out in the river: small creatures of barely feather. Now, at summer’s folding, two grow out of their gangle, the third a ghost-egg, a featherless space I occupy. Do they?

eyelashes to catch the dust,

When your appetite got lost

I gave you a cupful of earrings
without mates,

a drawer of left-handed mittens.
I lost your number

and the punch line to your favorite joke.

on Nowhere To Hide –

Good thing I lost your credit card too.

I lost the scar across your chest:

I lost your memory

make-out session,
then I lost your kid in the grocery store.
She’ll turn up one day, a failed
revolutionary, grasping your grandmother’s recipes.
I’ve lost your voice,

your train of thought,

so you can’t see me take

and put it back into your pocket.

We’re on a boat now,

a raft, really.
The water’s very bright
and stretches out

Into and entered I bend,

nose, the mole on the left breast.

as we marched back the night

trembled! we were so fucking fierce.

could there be and also?

I painted my face

Become body. It was full-limbed and pliant.

Sometimes, it betrayed me.

Other times, it leaps into fire. It becomes foolish

to say body/self as if separate.

My hand shields against sun. In the ocean,

in the wash fantastic. Body in water, the buoyancy.

how time opens like sex. Was a body, became body.

A full-blown moon-shine of sexy, fast to slick and lap

salt tides and tender. No need for explanation.

Sweet-flesh and breast, my wrist says

woman. And the back of my knees say desire.

seven brushes, each with its own task –

And your lips say

yes to want’s whole and my fist

curls around the ribbon, grosgrain shimmer. We birth this:

femme in a marvelously glittered bed.

Femme in a marvelously bedded girl – all the way in,

And push-up bra on the floor.

The wet tips. She finds

my cunt I find hers, but she does not sleep through the night.

The genders shift, restless in the sheets. They kick their feet

and four a.m. arrives. We exhaust in our definitions. Body

I have waded so far into this moment of sex –

can hold on, perhaps forever. I do not become 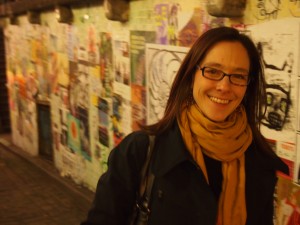 Tamiko Beyer is the author of We Come Elemental (Alice James Books, winner of the Kinereth Gensler Award) andbough breaks (Meritage Press). Her poems have been published or are forthcoming in The Volta, Tupelo Quarterly, Quarterly West, and elsewhere. She lives in a former chocolate factory, next to the Neponset River in Dorchester, MA. Find her online at tamikobeyer.com.