For Toni and the Sisterhood, with Love… – The Feminist Wire

Home / Activism / For Toni and the Sisterhood, with Love…

For Toni and the Sisterhood, with Love… 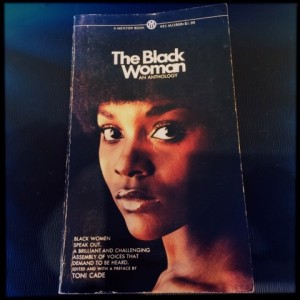 I knew Toni Cade’s voice before I met her. I first heard/found her voice in the preface to the ground breaking 1970 anthology The Black Woman…

We are in a struggle for liberation: liberation from the explosive and dehumanizing system of racism, from the manipulative control of a corporate society; liberation from the constrictive norms of ‘mainstream’ culture, from the synthetic myths that encourage us to fashion ourselves rashly from without (reaction) rather than from within (creation). What characterizes the current movement of the 60s is a turning away from the larger society and a turning toward each other. Our art, protest, dialogue no longer spring from the impulse to entertain, or to indulge or enlighten the conscience of the enemy; white people, whiteness, or racism; men, maleness, or chauvinism: America or imperialism… depending on your viewpoint and your terror. Our energies now seem to be invested in and are in turn derived from a determination to touch and to unify. What typifies the current spirit is an embrace of the community and a hardhearted attempt to get basic with each other…

It’s all in there: her ear for language; her cadence and use of complex rhythms; her wry humor and empathy; her passion and love for black people; her honesty and curiosity; her foresight expressed as allegory; and like all work with the power to transform the culture, her words seems outside of time and prescient these almost 45 years later. 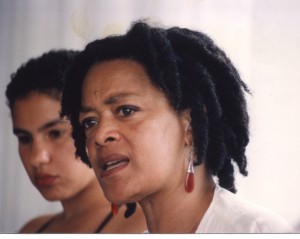 The first time we actually spoke was after a screening at International House (aka IHouse) in Philadelphia; it was 20 years after the publication of that seminal work and long enough ago that it was okay for us to smoke [inside] while dissecting the night’s screening. By then, I had read more, including Gorilla, My Love, The Seabirds are Still Alive, and The Salt Eaters, in which she asked THE question that I have been turning around in my head for the last 30+ years like a Zen Buddhist koan:

At IHouse that night, I discovered Toni was an embodied storyteller. She was completely animated, so alive and present, so totally within the narrative and focused on the object of her attention, her powers of seduction so strong she made believers of us all. I know she made a believer of me. I told her the story of Phuoc Phan, my Kung Fu Sifu, a master of Seven Mountains Spirit Fist King Fu, and his journey from privilege to re-education to the great post Vietnam War migration to the U.S., and just like that she invited me to join a scriptwriting class she was teaching at Scribe Video Center. I think she asked something like,

Did you ever think about making a film about him? Why don’t you come to my class at Scribe?

Of course I hadn’t thought about it, but suddenly, it seemed not only possible but also important, so I went to the class, which was actually for community organizations that were part of Scribe’s Community Visions program. It was the beginning of my connection to Toni and Scribe and the international community of artists, cultural workers and organizers committed to the use of art and culture as a tool for social justice of which I’ve become part; a commitment that continues to define my work today. 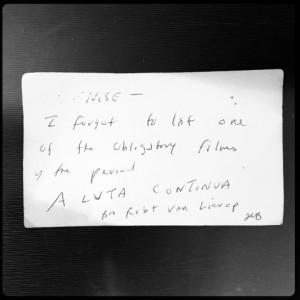 Toni once told me that as black women we’re part of a sisterhood and have a responsibility to hold each other up in the world; we can certainly find that is the case throughout her work—certainly The Black Woman is a form of testimony to that reality and intent, or as she says, “…a beginning—a collection of poems, stories, essays, formal, informal, reminiscent, that seem best to reflect this preoccupation of the contemporary black woman in this country…Many of the contributors are professional writers. Some have never before put pen to paper with publication in mind. Some are mothers. Others are students. Some are both. All are alive, are black, are women. And that I should think, is credential enough to address themselves to issues that seems to be relevant to the sisterhood.” 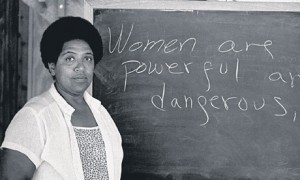 It is in that spirit that I have sought guidance from the sisterhood and from a black woman’s trinity that often includes—my Mother, who gave me the capacity to love and trust in the possibility of me, all that I am and can be; Audre Lorde, who taught me not to be afraid of fear and gave me a message about connecting to the source of my power, who’s words have provided inspiration and solace in times of personal struggle; and Toni, who gave me a message about joy and empathy and action and helped me see how we can foster deep connection through art, culture and community to transform our communities and the world. Her life is a stunning example of her belief that

She taught me about the nature of leadership and community in the way she lived, and like all truly great leaders, in the lineage she has left behind, each of us connected to the other through our love and respect for Toni—her humanity; her work as writer, cultural worker and organizer; her love of [all] the people; and her joy in the effort. As Alice Lovelace said about her,

Thanks to her capacity to share of herself and her knowledge, she has many sprouts and branches…She taught us about the social responsibility of the artist.

I believe Toni’s stories and legacy have a lot to teach about our need to adapt and evolve; about keeping pace and being relevant; and about staying connected and being responsible for and accountable to the members of our community. I am so grateful to have known her. I miss her; she made everything irresistible.

…The book is dedicated to the uptown mammas who nudged me to “just set it down in print” so it gets to be a habit to write letters to each other, so maybe that way we don’t keep treadmilling the same ole ground. 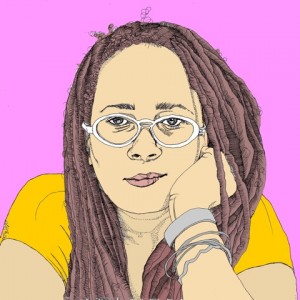 Artist, cultural organizer, facilitator and strategist, Denise M. Brown is passionate about using her skills and energies on creating, supporting and illuminating work at the intersections of art, culture and social justice. She is currently the Executive Director of the Leeway Foundation in Philadelphia, an organization whose mission it is to support women and trans* artists and cultural producers creating art for social change. Prior to that she was Associate Director of the Bread and Roses Community Fund, a film programmer for the Neighborhood Film/Video Project and Philadelphia Festival of World Cinema (PFWC), and a consultant with Leeway and other organizations in the Philadelphia area. For over 25 years, Denise has worked with cultural and social justice organizations regionally and nationally and is currently a member of the boards of Bread and Roses Community Fund, Grantmakers in the Arts, the Henrietta Wurts Memorial Fund, Philanthropy Network of Greater Philadelphia and Scribe Video Center. She has also served as a panelist for ARTOGRAPHY, Pennsylvania Council on the Arts, the National Endowment for the Arts, the Pennsylvania Humanities Council, the Philadelphia Cultural Fund, the Tucson Pima Arts Council, the Union Square Awards and others.