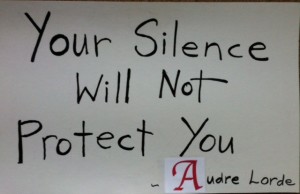 On the Ohio campus where I taught women’s studies for five years, the lavender Saturn of one of my most thoughtful feminist theory students was easy to identify. Its bumper was plastered with inspiring feminist slogans, and the most prominent among them featured this quote by Audre Lorde: “Your silence will not protect you.” Several years later that quote reappeared on the same campus, this time on a sign I carried at a May Day rally for equity, where I made the “A” in Lorde’s first name the scarlet “A” for adjunct. Lorde’s warning, from “The Transformation of Silence into Language and Action,” a paper she delivered at the 1977 MLA convention, is a fitting caveat to women’s studies directors and faculty in today’s highly corporatized university, where both our discipline and our faculty have become increasingly contingent. What it tells us is that even if we remain careful and silent, even if we don’t talk back to the dominant corporate culture about the precarity of our programs and our faculty, our programs and our positions will not be protected.

Consider the numbers. The problem of contingency has grown steadily since the 1970s, the decade that also saw the birth of women’s studies as an academic discipline and the subsequent launch of the National Women’s Studies Association. In the discipline’s early years, women’s studies programs asked the question, “Where are the women?” Today we know that many of them are in the academy. We also know they make up the majority of contingent academic workers. As Sivagami Subbaraman maintains, the position of adjunct has become feminized and is now a “women’s problem.” Contingent faculty – non-tenure track and adjunct instructors – represent 73 percent of all faculty nationwide, and women are 10 to 15 percent more likely to be in those positions. They comprise between 51 and 61 percent of adjunct faculty nationwide. And they are victims of the gender pay gap. Women who teach as contingent faculty earn 27 percent less than their male counterparts. And contingent positions are the highest in the disciplines transformed by feminism: women’s, LGBTQ and ethnic studies, as well as English. At the same time, women’s and gender studies programs find themselves increasingly vulnerable, disproportionally affected by institutional cuts justified by corporate-speak about “sustainability” and “marketplace demands.”

New Faculty Majority, an organization that advocates for equity for contingent faculty, speaks loudly about the issue of women and precarity. This year, NFM launched its Women and Contingency Project, which focuses on women as the most politically vulnerable and economically precarious faculty workers and on women’s and gender studies programs as among the most precarious disciplines in the academy. As part of the project, researchers compiled a database of existing research on women and contingent academic employment and identified research gaps. To fill one such gap, they conducted a nationwide survey of WGS programs, asking questions about the stability of their departments or programs as well as their autonomy to improve the working conditions of their contingent faculty.

In her piece on the Feminist Wire, Gwendolyn Beetham argued that WGS has abdicated its role as a leader in the fight against academic contingency and the corporatization of higher ed. That view was born out by the NFM survey. While chairs and directors of WGS programs who responded to the survey said they do everything they can to improve the working conditions of their contingent faculty, they admitted they are silent about contingency on an institutional level. They see themselves as having “no control over working conditions” and carrying “little real weight in significant decisions.” One admitted that threats to her position meant she had fewer opportunities to advocate for both contingent faculty and her students.

However, survey respondents also said they looked to their professional organizations for advice on how to improve working conditions for contingent faculty. They want to learn about best practices and exemplary initiatives that could help them fight the inequities experienced by contingent faculty. They want advice regarding how to engage with students and the public about the issues. They want to learn how they can best share available data with their administrations. And they want concrete action steps they can take to make a difference for equity.

They may get some or all of that. Preliminary results of the NFM survey were included in an article submitted for a special issue on “Institutional Feelings: Practicing Women’s Studies in the Corporate University,” edited by Jennifer Nash and Emily Owens, for the journal Feminist Formation. More complete results will be presented at a roundtable on “Advocacy and Activism in the Contingent Labor Movement,” one of three at this month’s NWSA conference that for the first time will include a feminist perspective on contingency. Participants on those three roundtables have submitted resolutions advocating for contingent faculty that will be considered at the conference’s Nov. 14 Membership Assembly Meeting. I urge NWSA leaders to listen carefully to what contingent faculty have to say about contingency, realize the vital role they play in advocating for them, refuse to stay silent on the issue, and take positive, substantive action. The organization’s leadership is already on the right track. Its Governing Council has agreed to take on the issue of contingency in 2015 and beyond.

You can do your part, too. Whether you are a student, a parent, a tenured faculty member, an administrator, an adjunct or a member of the public, you can educate yourself on the topic, then advocate for equity for adjuncts. Share what you learn at meetings on your campus or within your community. Spread the word via social media using the hashtag #WGScontingency. And if you are going to NWSA 14, join us at one or more of the roundtables on contingency. Because as Lorde tells us, “Your silence will not protect you…And there are so many silences to be broken.” Be a warrior. Break this one. 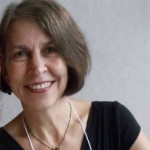 Paula Maggio received her Master’s in Liberal Studies from Kent State University. She created and edits Blogging Woolf. She is on the board of AAUW Ohio, has worked as Communications Director for New Faculty Majority and was one of the founding members of the Ohio Part-Time Faculty Association. She tweets as @woolfwriter.