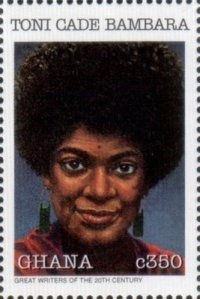 how to respond to the genius
of our sister Toni Cade Bambara? How to
give praise to this brilliant. Hard. Sweet
talking Toni. Who knew everything.
Read everything. Saw everything?

+++++I guess if we remember Willie Kgositsile’s lines:

And a generation of people began to question their silence. Their poverty. Their scarcity. Because you had asked the most important question we can ask ourselves:

What are we pretending not to know today? The premise as you said, my sister, being that colored people on planet earth really know everything there is to know. And if one is not coming to grips with the knowledge, it must mean that one is either scared or pretending to be stupid.

You open your novel with the simple but profound question: Do we want to be well? And you said in an interview with Sister Zala Chandler that the answer tends to be:

No! to be whole politically, psychically, spiritually, culturally, intellectually, aesthetically, physically, and economically whole—is of profound significance. It is significant because there is a correlative to this. There is a responsibility to self and to history that is developed once you are whole, once you are well, once you acknowledge your powers.

Amiri Baraka wrote that Jimmy Baldwin was God’s black revolutionary mouth. So were you Toni. You made us laugh resistance laughter. You taught us how to improvise, change shapes, sometimes change skins. We learned that if we are to be, sometimes we must have been there already and have people wondering about us:

Get on board this liberation train called Bambara. Cmon lil children. And Toni had many children. She taught us how to organize. Be. Their names are Aishah, Mungu, Karma, Kevin, D Knowledge, Ras, Nora, Louis, Tony, Morani. Gar.

Reprinted by permission of the author, ©1998 Sonia Sanchez. 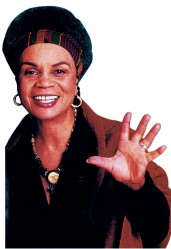 Poet. Mother. Professor. National and International lecturer on Black Culture and Literature, Women’s Liberation, Peace and Racial Justice. Sponsor of Women’s International League for Peace and Freedom. Board Member of MADRE. Sonia Sanchez is the author of over 16 books including Home Coming, We a BaddDDD People, Love Poems, I’ve Been a Woman, Sound Investment: Short Stories for Young Readers, Homegirls and Handgrenades, Under a Soprano Sky, Wounded in the House of a Friend, Does Your House Have Lions?, Like the Singing Coming off the Drums: Love Poems, Shake Loose My Skin, and most recently, Morning Haiku. In addition to being a contributing editor to The Black Scholar and The Journal of African Studies, she has edited an anthology, We Be Word Sorcerers: 25 Stories by Black Americans. BMA: The Sonia Sanchez Literary Review is the first African American Journal that discusses the work of Sonia Sanchez and the Black Arts Movement. A recipient of a National Endowment for the Arts, the Lucretia Mott Award for 1984, the Outstanding Arts Award from the Pennsylvania Coalition of 100 Black Women, the Community Service Award from the National Black Caucus of State Legislators, she is a winner of the 1985 American Book Award for Homegirls and Handgrenades, the Governor’s Award for Excellence in the Humanities for 1988, the Peace and Freedom Award from Women International League for Peace and Freedom for 1989, a PEW Fellowship in the Arts for 1992-1993 and the recipient of the Langston Hughes Poetry Award for 1999. Does Your House Have Lions? was a finalist for the National Book Critics Circle Award. She is the Poetry Society of America’s 2001 Robert Frost Medal winner and a Ford Freedom Scholar from the Charles H. Wright Museum of African American History. Her poetry also appeared in the movie Love Jones. Sonia Sanchez has lectured at over 500 universities and colleges in the United States and has traveled extensively, reading her poetry in Africa, Cuba, England, the Caribbean, Australia, Europe, Nicaragua, the People’s Republic of China, Norway, and Canada. She was the first Presidential Fellow at Temple University and she held the Laura Carnell Chair in English at Temple University. She is the recipient of the Harper Lee Award in 2004, Alabama Distinguished Writer, and the National Visionary Leadership Award for 2006. She is the recipient of the 2005 Leeway Foundation Transformational Award. Currently, Sonia Sanchez is one of 20 African American women featured in “Freedom Sisters,” an interactive exhibition created by the Cincinnati Museum Center and Smithsonian Institution traveling exhibition and she was the recipient of the Robert Creeley award in March of 2009.