The Price of Blackness: From Ferguson to Bed-Stuy – The Feminist Wire

Home / Criminal Justice / The Price of Blackness: From Ferguson to Bed-Stuy

The Price of Blackness: From Ferguson to Bed-Stuy

The unsettling image of the lifeless body of 18-year old Mike Brown, the unarmed teen shot six times by Officer Darren Wilson, which laid prostrate before family and neighbors for hours in a pool of blood in the sweltering summer heat in Ferguson, MO, will surely haunt the collective conscious of the U.S. for years to come. 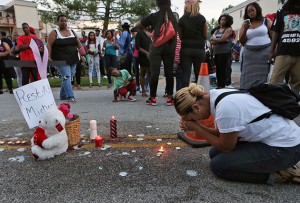 Mike Brown’s murder, and the brutalizing way his killing was turned into a public spectacle, has much to do with the ways Black lives are literally and symbolically devalued in neighborhoods throughout the U.S. The image of his lifeless body publicly displayed on the street is a heartrending reminder that Black bodies in the U.S. are rendered valueless—so much so that even in death, particularly the kind sanctioned by the state, Black people, like Mike Brown and his family, are not afforded the right to humane treatment.

When commenting on the demographic changes in Ferguson for CNN, Beryl Satter, author of Family Properties: How the Struggle Over Race and Real Estate Transformed Chicago and Urban America, noted, “This is what happens when you have massive racial change in a community and the power structure remains in the hands of whites and the police force acts as this sort of mediating force between the white power structure and what is now a black community and has very little empathy or knowledge about that community.”

Ferguson, like many municipalities across the U.S., has experienced a dramatic shift in its racial composition. The municipality of roughly 21,000, which, according to the U.S. Census, was comprised of a majority White populace (73.8%) in 1990, is now home to a majority Black populace (67.4%). Ferguson, thus, is more than the subject of a black teen’s death. It is the product of over five decades of “white flight.”

Changes in the racial composition of towns precipitate changes in the ways Black bodies are policed and valued in many neighborhoods. Anti-blackness—as evidenced through the enactment of inequitable laws, discriminatory policing practices, and economic exploitation disproportionately impacting Black people—is one of the threads that connects an individual tragedy, like Mike Brown’s death, to the broader structural issues of White racial supremacy, global capitalism, and gentrification impacting Black people and the working poor to middle class communities they hail from across the U.S. Black lives and White lives are differently valued and are, therefore, differently impacted under the conditions of White racial supremacy across the country.

My brief time in Ferguson prompted me to consider the many ways Mike Brown’s death, and life, was warped by the structural conditions mentioned above—all emanating from what scholar George Lipsitz aptly calls the “possessive investment in whiteness.” Such investments in whiteness, which impacts everything from access to housing markets to points of educational access for Black people within communities across the country, must also be considered alongside the mundane incidents of police violence and hyper criminalization in the U.S.

Black death at the hands of the state is a consequence of the precarious structural conditions restricting Black life from Ferguson to Flatbush, Brooklyn. Flatbush is the neighborhood where 16-year old Kimani Gray was shot and killed by NYPD in March 2013. I live a short distance from Flatbush, in neighboring Bed-Stuy. Unlike Ferguson, which was a predominantly White space that experienced a decrease in its White populace, traditional black neighborhoods like Bed-Stuy are now experiencing an increase in its White populace. 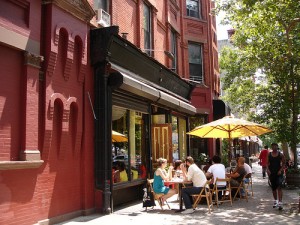 Bed-Stuy is evidence that the investment in whiteness and divestment in blackness shapes the conditions in which Black bodies engage, and are engaged in, geographical spaces. White bodies in Bed-Stuy now seemingly signals safety and welcome, which is to say: White folk who would not otherwise perceive “Do or Die BedStuy” as safe and welcoming begin to finally perceive it as such because of the presence of other White people. Race shapes perceptions of space.

The problem with this misperception has less to do with the brutal truth that Black spaces like BedStuy or Ferguson are typically deemed “the hood,” as spaces that lack or are wholly violent until White folk increasingly begin trekking into, or back into, the very communities many people, white/black/brown/otherwise, imagined as terrifying. The more insidious problem is the belief that whiteness at all times and in all places signifies safety and bounty and, therefore, represents a site of investment: new stores selling expensive items begin emerging; the same stores stay open (the doors and not just side windows) twenty-four hours; realtors finally begin to take an interest in property sales; nameless and faceless “investors” begin leaving cheap flyers on stoops or in mailboxes promising cash for homes. Safety becomes a relative experience when gentrification occurs. The presence of White people almost always guarantees the increased presence of resources, like police, which does not always guarantee safety for Black people in those same spaces.

And here is what distinguishes the movement of White people into Black and Brown spaces from the movement of Black gentrifiers into those same spaces. Those Black folk, like me, who are afforded the privilege of choosing some of the locations we live are still considered valueless bodies in the same spaces we gentrify. Our presence does not always bring healthy food stores, cute eateries, and hospitable police; on the contrary, we are embattled by the very structural forces of White racial supremacy and capitalism that actually benefit White gentrifiers. And some of us might easily be stopped by police, harassed, or even shot whether we appear respectable or not in those same spaces.

So, if we are to ensure the end of state-sanctioned violence against Black people, we must be ready to think through and redress the socioeconomic and class underpinnings of anti-blackness and White racial supremacy. Until we do, whether we are bodies left to die without compassion in the streets or bodies read as deficits in communities across the U.S., Black people will continue to be treated as something other than human as whiteness continues to function as a sign for possession and asset.

Related Itemsanti-black violenceBed-StuyFergusongentrificationMichael Brown
← Previous Story The Violence, Anti-Blackness, and Black Life Matters Forum: An Introduction
Next Story → “When are we going to wake up?” Anti-Blackness, Police Power, and Profit