By Guest Contributor on September 2, 2014

Palestinian women never cry when they appear on Israeli TV. On news broadcasts, the same scene repeats itself: the women’s heads invariably covered with the hijab, they raise their arms, shake their fists heavenward, and scream. Tears mist their eyes but they do not collapse. The women writhe and quiver in rage. In these mini-portraits, they are carriers of deep incomprehensible agony, but their pain is uncontrollable, almost violent, and represented as unintelligible to the Israeli viewer.

During the four weeks of war in Gaza, most Israelis turned to the central national television stations for the latest information. Israeli media depicted the war as an act that was forced upon Israeli society – “we don’t want it, but we have no choice (ein brera),” was a common argument presented in interviews and reports. Another frequent refrain expressed by Israeli officials was that there is no one to talk with. They have no partner for peace. And indeed, the Palestinian people, and specifically Palestinian women, have hardly any presence in Israeli media. For each news report, averaging ninety minutes, one or two minutes focus on the Palestinian perspective, a token depiction of the greater consequences of the war. Within this brief span, only ten to fifteen seconds show Palestinian women, tracing their anguished responses to social mayhem. 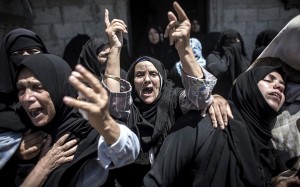 With men dominating the depictions of military activity and brutality of each side, Israeli and Palestinian women have appeared in Israeli media as the voices of agony and mourning. But unlike Israeli women, whose pain is detailed and decipherable and thus makes room for empathy, the misery of Palestinian women, limited to short clips, is constructed as chaotic, part of an animal-like suffering on the verge of violence.

Dressed in long shawls, enraged these women face the camera. Their anger is unruly, and alienating. No caption is attached to the figures that mourn their losses in front of you. Their lives and agony become synonymous. Mourning is represented as a way of life for these women. You ask yourself where have you seen these scenes before – was it in Iraq of 2003 or 2014? Gaza of 2010 or 2014? – and then ask: Why do you keep encountering the same scenes? Who gains from recycling these images of grief, of wailing Palestinian/Arab women?

The circulation of Palestinian women’s pain, like the images of suffering of Muslim and Arab women around the world, is consumed by the West as a spectacle that exists outside time and space. Their cries are not located in space or specific geography, but rather they appear on Israeli TV as one “Palestinian” body. Their differences are erased in favor of an essentialized portrayal transfixed in a state of perpetual hysteria, seemingly since the beginning of history. Not only in their lives are Palestinians perceived as violent, but also when they are facing death. Depictions of their “unintelligible” ways of meeting death construct a clear understanding of Palestinian identity, immorality, and most importantly, dismissal of life. They are ready to die. Recycling the images of cryptic torment of those who are ready to die justifies, once again, the ostensibly rational claims of Israeli generals in favor of violence: “We have no partner (of the same ‘civilized’ and moral level) for peace.”

In a clip shown on (Channel 2) on July 28th, the third week of the war, a Palestinian woman stands amid ruins of grey concrete. It is near the end of Ramadan and the beginning of Eid al-Fitar. Her name, age, and specific location remain missing as she asks the camera, “How can I celebrate this holiday? What is there to celebrate?” She appears helpless: “This is a black holiday. All is ruined,” she mutters while sobbing, “How can I celebrate this ruin?” Then more tears follow. The camera zooms on her face. More tears become visible. “Who wants to celebrate . . . the food, we eat like it is poison.” Birds sing in the background and she grieves: “Shame! Shame! Where is the world?” End of scene. The Israeli reporter goes on to analyze the destruction in Gaza. He comments: “And still Hamas insists on this war.” Back in the studio, the Israeli commentator sighs.

Next is a report about four funerals of Israeli soldiers who were killed in Gaza. Here, suffering has a name. Funerals are recorded. Grieving parents stand next to the fresh graves of their sons. We are watching the father of a dead soldier, bidding farewell to his son. Then, we learn about the story of the “prince,” who wrote his last will and testimony just before entering Gaza where he eventually died. After a long interview with his wife, she describes her last kiss, given to the corpse who was once her husband. She sobs quietly. An acoustic guitar melody plays in the background. The commentator drops her head, she is in pain, but she maintains her composure. A deep sigh, and she moves on to the next report. It is a spectacle of endurance and stamina: the commentator, like the widow, stores her pain: they are in control, they do not surrender to unruly grief. The effect of such a striking contrast in suffering is clear: Israelis have no one to broker a peace. This becomes the so-called logical basis for Israel’s pitilessness.

According to Israeli media’s coverage of the war, Israeli’s response to the kidnapping of three youths emerged as a well-reasoned act, strategically designed by army generals and politicians. Yet, the coverage of the war reveals the systematic abuse, exploitation, and denial of pain. Perhaps part of the tragedy is the belief of Israelis that no one can understand them, and nothing can match their (historical) pain. There is no one for Israel’s heads of state to talk with. Moreover, there is no one to cry with. Meanwhile, there are traces of self-pity in the maudlin Israeli fantasy of moral isolation in the Middle East. This fantasy, if not resisted, might be the undoing of the Israeli State.

To justify and sustain such a fantasy, Israeli media does not engage Palestinian pain and grief in a meaningful manner. In particular, images of Palestinian women’s “uncontrollable” and “disruptive” laments propagate moral (and racial) division that has dominated Israeli and Western television. Along with rejection by the Israeli government of the Israeli NGO B’Tetselem to have the names of Palestinian children aired on Israeli television, the mourning of Palestinian women has no justification to the Israeli viewer. Israelis have no Gaza, no city of the displaced and maimed. Israeli depictions of Palestinian pain as barbaric are, in other words, a way to escape responsibility, to be accountable for their deeds, to recognize Palestinians as equal owners of the land and thereby imagining a life of peace and justice. 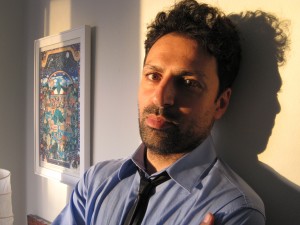