“Defeat Will Be Detestable to Us”: A Tribute to June Jordan – The Feminist Wire

Home / Black Women / “Defeat Will Be Detestable to Us”: A Tribute to June Jordan

“Defeat Will Be Detestable to Us”: A Tribute to June Jordan

I had a lover who used to roll me cigarettes. We listened to Silvio Rodriguez and the Cocteau Twins by candle light, drank mint tea and tasted each other’s mouths with the fervor of the truly thirsty. Glass jars in the kitchen brimmed with whole wheat flour and raw sugar and grains her housemates bought from the Takoma Park Food Coop. They made their own granola. Mealtimes in Spanish and English were eaten with the latest news on El Salvador and the US government’s Dirty Wars; everyone in the house worked either against the wars in Central America or for the health of the survivors. That house was the other life that was calling me, away from lies, and towards my “honest human body”:

To get there, I rode my mountain bike through Rock Creek Park, away from my university with its CIA-infested academies and closeted queers, taking northeast paths through the forest and shedding shrapnel until I emerged up a steep hill. Once there, I left my bike on the porch, and listened with my entire being to the songs of its inhabitants and their guests. Reading Nicanor Parra, Ernesto Cardenal, June Jordan. Books had always saved me, books had kept me safe. Now books were teaching me everything I had not been meant to learn.

I SAID I LOVED YOU AND I WANTED

I SAID I LOVED YOU AND I WANTED AFFIRMATIVE

I SAID I LOVED YOU AND I WANTED MUSIC

I SAID I LOVED YOU AND I WANTED

NOBODY THIRST AND NOBODY

The white housemate encouraged me to go to the I am Your Sister Conference. The spaces for white women are full, they said, but there are still spaces for women of color. You should go. I had seen Audre Lorde speak three years before, and the realness of her, the promise that I, too, could be real, struck me with terror. My own grasp of myself was so fragile I was sure that if I walked in to such a place, alone, in Boston, I would surely fade into nothingness. So, I stayed home. And then, she was dead.

I do everything I possibly can every day.

I no longer procrastinate.

I give whatever I undertake all that I’ve got

I pay closer and closer attention to incredible,

surrounding reasons for celebration and faith

I watch for good news.

In 1992, I, as we say, “got my life.” I published a poem in Sinister Wisdom’s Women of Color Issue. An ad on a bulletin board of Lammas Women’s Books got me to Michfest, in a car with strangers and Michaela’s Strawberry Shortcake sleeping bag. I ran into the white housemate, who told me his real name, and took me to the dungeon in the Twilight Zone. When I returned, an ad in the community events section of the Washington Blade led me to a panel on “Coming Out in Communities of Color,” where Jennifer announced a black women’s writing group. I went up to her afterwards and said, “I’m a writer.” She was with Jay, Pariss and Venus, who looked me up and down. “We’re going to Tracks,” they said. “Women’s night. You coming?” We drove there in Pariss’s golden VW bug. I’d been to Tracks before, but only on Straight Night with a closeted girlfriend. When we got inside, the huge double warehouse was filled with house music and hundreds of beautiful Black women, dancing, playing pool, playing volleyball, sitting by the fountain outside. I had no idea there were so many of us. I had no idea we were so beautiful. I stopped being afraid. I had to sit up and pay attention. I stopped hiding from myself. I wrote more. I read more. I fucked more.

I am not wrong: Wrong is not my name
My name is my own my own my own
and I can’t tell you who the hell set things up like this
but I can tell you that from now on my resistance
my simple and daily and nightly self-determination
may very well cost you your life

(Poem About my Rights)

And now, I hung on to June Jordan’s every word. I watched her on screen in Pratibha Parmar’s A Place of Rage. Her words were part of our language as we performed our poetry and plays, held drumming circles in Ami and Karma’s back yards, partied at June’s for Black Pride, spoke against war in Iraq, welcomed our sisters from South Africa, held kiss-ins against sodomy laws, protected clinics, marched for reproductive rights, made our selves queerly visible, and fell into and out of each others arms and beds. And when the time came for me to finally see her in person, I went. My copy of Kissing God Goodbye is signed, “In faith!”

In this Manual, readers will find out…how to be Super Politically Correct and therefore how to pursue a defensible mode of creative education as we approach the 21st Century… because a poem is antithetical to lies/evasions and superficiality, anyone who becomes a practicing poet has an excellent chance of becoming somebody real, somebody known, self-defined, and attuned to and listening and hungering for kindred real voices utterly/ articulately different from each other. (Poetry for the People: A Revolutionary Blueprint)

Karma and I organized the Sister [W]rite Workshop and Readings series at SisterSpace and Books (imagine the riches — at the time we had both a women’s bookstore and an African American women’s bookstore) with funding from the Humanities Council of DC. What audacity to conceive of free creative writing workshops for Black women, and for a reading series that presented Black women scholars’ work! Faye and Cassandra gave us free space they couldn’t afford; the Humanities Council paid for our guests, labor, materials and advertising. Karma was also the main host of Women in the Life’s Open Mic series, and she and I and other Black dyke poets made our incursions from there onto all outposts of DC’s booming Spoken Word scene. At Ernesto’s open mic at the Ethiopian joint on U Street, Kaffa House, the barflies called me “the Nasty Girl” but asked when I would be back. At Toni’s It’s Your Mug, she welcomed our challenges to Black nationalist homophobia. At MotherTongue, we built a bridge between the white and black women’s writing communities that continued for years. “If you are free, you are not predictable and you are not controllable,” wrote June in in 1991. We had a revolutionary blueprint.

I am going to tell you that my family is West Indian, like June’s, that they ended up in Bed-Stuy in Brooklyn, like June’s, that my father was abusive, like June’s. Like June, I got a scholarship to a girl’s boarding school that took me out of the chaos. In Soldier, her autobiography, I thought I would find a road map out of the chaos of my thirties. But it stopped when she was twelve. I was so angry! Let down. I loved the book. In the review I wrote for Ms.Magazine, I called it “symphonic“ and “impressionistic.” It portrayed too well the tensions of that kind of house. But I already knew that ending. I wanted to know how to live the rest of my life.

When June Jordan was going to be in conversation at NYU with Toni Morrison, about Soldier, I marched up there to get the rest of the story. It was confusing! She wasn’t angry. She said. She wasn’t traumatized. She said. She laughed. Toni laughed, too. A woman tried to ask a question about the trauma visited upon us by our families and they pushed her question back and away. It was then I realized I was not going to get what I wanted, for us to be angry at our dead, old, fathers together, for her to tell me what to do next. I wanted to hear how bad it was. To be hurt together. And for her to lift me from that place as her words had lifted me before. And then I let go. And then she died, too.

what makes me ache

I hope to fend

(Argument with the Buddha)

I published a book of poems, and some people have interviewed me about it. I talk about June Jordan every time. She is my writer’s writer, my teacher’s teacher. I learned from her to meditate and take time for myself before doing a reading or speaking; to create every class with my students, not just for my students. I revisit her work when I need to rouse language and free words from depths that are choked with censure and judgment. I revisit her life in order to be present with what is, even with no road maps and no images. I revisit her loving spirit, for not only does she write constantly about love, but I know many whom she loved, and who loved her; to remind me to love above all, and, for this reason, to be dangerous with the word in the service of justice. 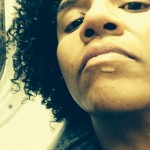 r. erica doyle was born in Brooklyn to Trinidadian immigrant parents. Her debut collection, proxy (Belladonna* Books, 2013), won the 2014 Norma Farber First Book Award from the Poetry Society of America and was a Finalist for the Lambda Literary Award in Lesbian Poetry. Her work has been published various journals and anthologies, including Best American Poetry, Our Caribbean: A Gathering of Gay and Lesbian Writing, Bum Rush the Page: A Def Poetry Jam, Ploughshares, Callaloo, Bloom, and Sinister Wisdom.

Her articles and reviews have appeared in Ms. Magazine, Black Issues Book Review and on the Best American Poetry and Futurepoem blogs. She has received grants and awards from the Hurston/Wright Foundation, the Astraea Lesbian Writers Fund, the DC Commission on the Arts and Humanities, the Humanities Council of DC and Poets and Writers, and she was a New York Foundation for the Arts Poetry Fellow. Erica is also a fellow of Cave Canem: A Workshop and Retreat for Black Writers.

In addition, she has read her work at the Kennedy Center, the National Black Arts Festival, Joe’s Pub, the Nuyorican, the Calabash International Literary Festival in Jamaica, WI and various colleges and universities. Erica received her MFA in Poetry from The New School, and lives in New York City, where she is an administrator in the NYC public schools and facilitates Tongues Afire, a free creative writing workshop for queer women and trans and gender non-conforming people of color.