This excerpt from the short story “Kill Marguerite” takes place after the protagonist, Caty, has already beat Level One and killed Marguerite, her arch-enemy.

BEGIN>> The trampoline is this big old trampoline in Matt and Curtis Wheeler’s backyard, and it’s surrounded by woods on pretty much all sides, which is why it’s so dangerous if you were to jump wrong or get pushed—you could go right into a tree, you know, and your whole face’d get slogged off by bark. It used to be fun and safe when Caty and Kim were in their heaviest BFF stage, when Kim liked Matt and Caty liked Curtis and they jumped and laughed and poked each other, and the boys doublejumped the girls to get them to go higher. Then Marguerite and Shelly moved in, you know, and that was the end of that. Everyone started getting rough and mean and tried to push each other into trees all the time, which Caty didn’t like, not one bit.

But now she has an extra heart and a gun, and is dressed in her brother’s camo, and so Caty is stealth magic. She decides to check out the scene before she makes herself known since she is smart like that. So she goes the back way through the woods to get to the trampoline, and tries to be quiet and not step on twigs, which are always so loud and revealing, especially when you’re Fat like Caty.

So Caty is crouched low a few trees back and surveying the scene. Shelly and Kim are there, plus the Wheelers, Riley, Alex, Brendan, and Ray.

Suddenly the air beats red and the birds turn into exclamation points flying across the sky. Caty tenses. Marguerite slinks out of the Wheelers’ house in black spandex ninja gear, handling some nunchucks and other ninja stuff, and Caty is like Uh-oh and Oh shit, perhaps she has underestimated her enemy.

“Oh Caty… Caty Caty fugly lady, how does your stomach grow?… Come out and fight, you fat chicken… aww, is the fat chicken worried she’ll break the trampoline?” Marguerite whooshes her nunchucks around expertlike and heck no, gun or no gun, Caty’s not going in there.

She’s in the process of backing away when she hears a gentle jingle coming from the action arena. Look, up there, in the tree above the trampoline, right above Marguerite’s head, something glittery. Could it be… SuperPowers? Caty zooms in—yes. Lodged in a big tree branch is a jetpack.

The game has now changed entirely.

So Caty pauses and wonders how she might grab the rocket pack without Marguerite strangling her with her nunchucks. Caty stands a minute, her mind chewing hard on this dilemma. And the smell of the woods is bringing back memories of last weekend, in the woods, at night, when they’d all gone camping, Marguerite, Shelly, Kim, and Caty, so deep in Marguerite and Shelly’s backyard you could barely see the light from the Thurwoods’ porch. And Caty is remembering how, when she had to go to the bathroom real bad, they wouldn’t let her take the flashlight, so she just went in the woods, close, but not close enough for them to shine the flashlight on her naked bum; and how they wouldn’t let her back in the tent afterwards until she’d gone all the way in the house in the dark to wash her hands; and how, when she got back, there was no one in the tent, no one at all, and it was really creepy like in Unsolved Mysteries. She’d zipped herself in and waited for like an hour until she got too scared and had to pee again, she’d had a lot of Sprite, you know, and so she decided to leave the tent and go back in the house to sleep, they must have all gone in after her, that was it. So she unzipped the tent zipper and cautiously stepped outside. And as soon as she was out they all flew at her from nowhere, howling and laughing and screaming. And Caty was so scared she shrieked and peed her pants and then they made fun of her all the rest of the night and made her sleep in the bathroom, on the toilet, just in case.

And she had. Why had she done that? Why hadn’t she just…

“AWWARRWAWR!” Caty rips toward the trampoline with vengeance. In her rage she is blind to the fallen branch in her way and she trips over it and slips on the wet leaves, and wow, that was a bad entrance, like the worst entrance she could have made. One of her hearts flashes. Caty is down.

Marguerite swings around and sees Caty in the woods struggling to get up. She pulls her arm back, then throws. Here come the nunchucks, straight for Caty’s neck.

BEGIN>> Caty crawls toward the trampoline the back way again. Shelly and Kim are already there, plus the Wheelers, Riley, Alex, Brendan, and Ray, and there’s Marguerite slinking out of the Wheelers’ house in black spandex ninja gear, handling some nunchucks and other ninja stuff.

Caty clocks the SuperPowers sitting in the tree and deduces that the only way to get them is to use the trampoline. She breathes deep for a minute and tries to develop a strategy. She will play dumb, she decides. They’re used to that. So Caty steps forward and announces herself with her hands up, and everyone ripples with excitement. She hears Brendan bet Alex loudly that she won’t last two minutes, but she ignores him, breathes deep and smart and asks Marguerite with much humility if she can please please jump on the trampoline just for a few minutes to warm up, please.

Marguerite thinks for a minute. “Fine,” she says. “Just try not to piss your panties.”

So Caty steps on the wooden block and then onto the trampoline and tests it a little. She does some dumb stretches and doesn’t give a crap that they are all mimicking her in their outer-trampoline circle, she’s going to get her jetpack, they’ll see. She jumps and she jumps and she jumps, and then she jumps high enough to grab the branch below the jetpack and pull herself up, it is not a graceful maneuver since she has very little upper body strength, but darned if she doesn’t do it, grunting all the way, and look, there she is, up in the tree in reach of her goal. Caty grabs the rocket pack and tries to put it on. A low blare sounds in her ear. Huh. She can’t seem to—oh. She pulls her rifle out of her bra and stashes it in a bird’s nest, then tries the jetpack again:

Chime! Caty finds herself angling forward while the chatter below speeds up to match the accelerated soundtrack tempo. Now Caty is SuperRocketrix, and Marguerite is in big trouble.

Caty glances down to see The Enemy scrambling onto the trampoline and huffing and puffing like one of the indignant blowfish in Caty’s brother’s collection of dead fish and sharks.

“Uh!” Marguerite lets out and stares up at her. Caty grins from her tree branch, raises a fist, and she’s off and zooming away.

She is determined to get a handle on her new powers before putting them to the test, so she tries out SuperSpeed, then aerial somersaults. She practices landing by stomping on clouds, unleashing tufts of white fuzz that rain down on her enemies.

Swerving away from Marguerite’s flying nunchucks, Caty zooms down and lands in a somersault on the trampoline, the impact leaving Marguerite off balance so she falls hard on her bum. Marguerite bounces on the trampoline once, twice, three times, and Caty’s back up in the air showing off her new and impressive acrobatic moves, like aerial somersaults and high kicks at SuperZoom speeds.

Marguerite manages to get herself upright again. “Come down and fight, you fat bitch!” she screams.

“Why don’t you come up here?” Caty taunts.

Marguerite spouts samurai stars from her mouth and Caty leaps and dives in and out of clouds to protect herself. Caty says, “Hot dang Marguerite you really know how to push my buttons,” and she says it bored-like and in control, like a supercool superhero named SuperRocketrix should.

But enough with the small talk. Shut the freezer door! Caty folds herself into SuperSpeed torpedo form and zings toward Marguerite, fist-first, kerplow, right in that precious evil face. Marguerite’s eyes tremble as Caty’s knuckles drive into them.

Caty regroups. Her body flickers as she flies up and into a SuperPower Somersault and then Thunk, she lands powerfully, kneesdown on Marguerite’s stupid head, and Marguerite’s head ruptures on impact, leaking all of the slimy spaghetti strands that were her thoughts and feelings.

Caty throws her arms up in champion mode, relishing her easy win and the proud look on Alex’s face as he cheers for her, for Caty, and even mouths “I love you,” as Kim looks on approvingly. So she is totally not ready for Shelly, who comes flying at her, trying to slice up Caty’s face with her fingernails. The world fades out in time.

Caty goes home and eats her dinner and her dessert and tries to persuade her mom to drive her to school tomorrow because she is afraid of the bus stop but she Has to go to school because tomorrow is the Spelling Bee, and she cries into her brownie when her mom says no. Why is Caty so upset, Caty’s mother asks, and Caty blubbers about the mean girls in the neighborhood and how they’ll kill her and stuff. And Caty’s mom says, “Don’t be so dramatic.” She turns up the TV volume. “Fine. I’ll drive you. Have another brownie.”

Caty marches over to the kitchen counter where the brownie pan is, and look, a slick red heart is beating thu-thump in the middle of the pan. Caty claws it out of the pan and swallows it whole. Ba-da-dum-chime! New life. 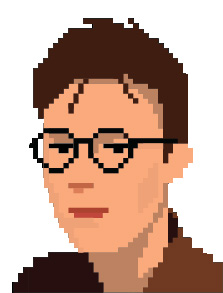 Megan Milks is the author of Kill Marguerite and Other Stories. Her work has been included in 30 Under 30: An Anthology of Innovative Fiction by Younger Writers; Wreckage of Reason; and Fist of the Spider Woman: Tales of Fear and Queer Desire, as well as many journals. She is co-editor of the volume Asexualities: Feminist and Queer Perspectives and is currently working on editing the next volume of The &NOW Awards: The Best Innovative Writing. Learn more at http://www.meganmilks.com.